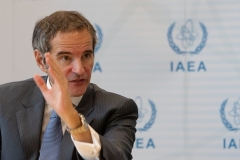 Berlin (CNSNews.com) – Dismissing European criticism, the Iranian regime is adamant it will not reverse course in moving further away from international nuclear safeguards until the United States lifts sanctions.

“She expressed her concern that Iran continues to fail to meet its obligations under the nuclear agreement,” government spokesman Steffen Seibert said in a statement, adding Merkel told Rouhani “now was the time for positive signals that create trust and increase the chances of a diplomatic solution.”

However, Rouhani told the chancellor that the only way forward is for the U.S. to revoke its “inhumane and illegal” sanctions, his office said in a statement.

The call comes ahead of a scheduled virtual meeting between French, German, and British foreign ministers and Secretary of State Antony Blinken which will “focus on Iran and regional security in the Middle East,” according to the French foreign ministry.

The three European countries are parties to the Joint Comprehensive Plan of Action (JCPOA), the 2015 nuclear deal which President Trump exited in 2018, restoring sanctions that had been lifted earlier. Iran then began to walk away from its commitments under the accord, and now says it will only return to them if the Biden administration lifts the sanctions.

Rouhani said Wednesday the latest decision was merely ceasing to observe a voluntary protocol, not ending cooperation with the IAEA entirely.

“The Additional Protocol is a step beyond the [standard] safeguards,” he said. “The safeguards will continue to be enforced and will be overseen by the agency,” he said. Rouhani repeated the regime’s position that its nuclear activity is purely a “research program.”

The Additional Protocol empowers the IAEA to carry out snap inspections in member countries of military or other sites suspected of nuclear-related activity.

When promoting the JCPOA to the American people and Congress in 2015, the Obama White House frequently pointed to the Additional Protocol arrangement as a further defense against Iranian cheating on its obligations.

IAEA director-general Rafael Grossi has scheduled an emergency trip to Iran on Saturday to discuss the decision before it is implemented.

The Biden administration has said returning to the nuclear deal would only be possible if the Iranians roll back uranium production and return to strict compliance, a stance Blinken reaffirmed on Tuesday.

“The path of diplomacy is now open,” he told NPR. “Iran is still far from meeting the agreement. So we have to wait and see what it does.”

Blinken reiterated that any return to the nuclear deal would only be a precursor to “a longer and tougher agreement.” He did not comment on the latest announcements from Iran.

The U.S. and European partners have called for the agreement to be revised or expanded to cover Iran’s ballistic missiles program, but Iran has repeatedly rejected this.

Laura Rockwood, director of the Vienna-based Open Nuclear Network, said the NPT rules are important for mitigating the chance of an outbreak of nuclear conflict.

“The rules are like adding more pieces of a puzzle for inspectors to work with,” she told Bloomberg on Wednesday. “If Iran chooses not to implement the Additional Protocol, the verification gap expands. Continuity of knowledge could decline.”

“It is not going to make Iran more secure and it doesn’t leave the Biden administration with many options,” said Rockwood, who headed the IAEA’s legal department for almost three decades. “Things can quickly spin out of control.”