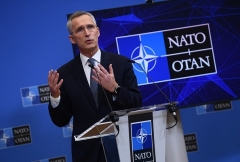 Brussels (CNSNews.com) – An agreement to resume dialogue in the first NATO-Russia Council meeting in two years is being viewed as a positive sign, although fears of potential armed conflict remain, given the deep divisions between the two sides.

“This was not an easy discussion,” NATO secretary general Jens Stoltenberg said on Wednesday, following the talks between representatives of the 30 NATO allies and Russian Deputy Foreign Minister Alexander Grushko and Deputy Defense Minister Alexander Fomin.

“There are significant differences between NATO allies and Russia,” he said. “But that is exactly why this meeting was so important.”

The U.S. and European allies reacted with alarm late last year after tens of thousands of Russian troops were reported to be amassing near Ukraine’s border, ostensibly for military exercises but stoking fears of an invasion.

Both sides agreed to resume dialogue and “explore a schedule of future meetings,” though no dates have yet been set. Nevertheless, Stoltenberg said the fact all NATO allies and Russia were able to engage again was a “positive sign.”

The meeting in Brussels was wedged between Russia-U.S. talks in Geneva on Monday, and a meeting of the OSCE permanent council, to take place in Vienna on Thursday.

He added that NATO would like to reestablish its office in Moscow and the Russian observer mission to NATO in Brussels, both of which were shuttered amid tensions in the relationship.

Despite the resumption of dialogue, the gulf between the sides remains wide.

Russia restated its December proposals for security “guarantees” from the West, including demands for a halt to further NATO expansion and for a withdrawal of forces and weaponry from eastern NATO members.

But Stoltenberg stressed that NATO would not renounce its commitment to protect and defend allies, and would not remove troops in the eastern part of the alliance.

“It is only Ukraine and 30 allies that can decide [on possible NATO membership],” he said during a press conference. “No one else has anything to say, and of course Russia doesn't have a veto on whether Ukraine can become a NATO member.”

“NATO allies are ready to engage in dialogue with Russia, but we will not compromise on core principles,” he said.

State Department spokesman Ned Price said in a statement Sherman had “stressed that while the United States is committed to diplomacy, it stands ready to impose significant economic and political costs, in close coordination with its allies and partners should Russia escalate its aggressive actions against Ukraine.”

The same day, Russian Deputy Foreign Minister Sergei Ryabkov said “no progress” was made in his talks with Sherman in Geneva, and declared that it is “absolutely mandatory to make sure that Ukraine never, never, ever becomes a member of NATO.”

Bruno Lété, a senior fellow in security and defense, at the U.S. German Marshall Fund in Brussels, said while the meeting showed both sides were ready to try diplomacy to prevent armed conflict, the way in which they resolve their competing visions could determine how the future order of Europe will be organized.

Reconciling the parties’ positions will be extremely difficult, however.

“There is no trust. There's even mutual dislike,” Lété said. “And both parties have a completely different vision on what the future of European security should be.  Russia believes it has the right to have a zone of influence (e.g. the post-Soviet area), whereas NATO supports the sovereign decisions of states to define their own future.”

Lété said that the question now was if diplomacy could succeed – but the chances appeared slim.

“NATO will not make any concessions on enlargement. The ‘open-door policy’ is the DNA of NATO. So these talks will be very difficult,” he said.

At the same time, he said it was in Russia’s interests to prevent war. Invading Ukraine would be a very costly venture, and the Kremlin is also engaged now in Kazakhstan and has concerns in Georgia.

“That's why we see the Russian side is trying to see what they can achieve through diplomacy,” said Lété. “My fear, however, is that if Russia feels that diplomacy will not deliver on its expectations, that war is still an option for the Kremlin.”

He emphasized the use of economic and political sanctions as a first response, however, and said that NATO would provide “support” to Ukraine.

He noted that Ukraine was a “partner” but not yet a member of NATO, alluding to Article 5 of the North Atlantic Treaty, which states an attack on one member is an attack on all.

Lété said that in the event of a conflict, NATO would be unlikely to engage militarily in Ukraine.

“What the West would do would probably be reacting with heavy sanctions, at least the United States,” he said. “I think Europe is still divided on what sanctions could be.”