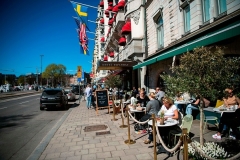 A Stockholm restaurant on April 22. (Photo by Jonathan Nackstrand/AFP via Getty Images)

Berlin (CNSNews.com) – Officials in Sweden say a relatively low coronavirus death toll justifies the country’s unusually relaxed pandemic response, but critics charge the approach offers poor protection to the vulnerable elderly population. There are also questions about the accuracy of the data being reported.

Some argue that this shows Sweden’s approach of limited restrictions is working. Authorities put in place social distancing measures and banned public gatherings of over 50. But only the sick and elderly are expected to stay at home, bars and cafes have not been closed, and neither have the borders.

On the other hand, Sweden’s death toll looks far less promising when compared to its Scandinavian neighbors – which have more restrictive measures in place – significantly higher than those reported in Denmark (443), Norway (207) and Finland (206).

Sweden’s state epidemiologist Anders Tegnell calls the country’s approach to the crisis “the only way forward.”

“Every country will have to achieve a degree of herd immunity, through vaccinations or otherwise," he said. “All [European] countries already have the virus, so why close the borders now?”

Tegnell said he believes a long-term lockdown would not be feasible, as COVID-19 is a disease that will only be eradicated once a vaccine is available, which might take years.

“So we have to come up with sustainable solutions that keep the virus’s circulation manageable for a long period to come,” he said.

Sweden’s more relaxed approach has raised particular concerns regarding the safety of the country’s elderly.

Tegnell at the weekend acknowledged there had been some problems with Sweden’s approach when it comes to the elderly.

“[W]hat we have failed to do is to protect our elderly,” he said in an interview with the Dutch newspaper Trouw. “At least half of the corona deaths have happened in care homes. This also explains the high fatality number compared with our neighboring countries.”

“We warned elderly care homes at an early stage, but something hasn’t worked out as it was supposed to,” said Tegnell. “We are starting an investigation into what exactly has gone wrong, but it seems that these homes in the Stockholm region are not adequately equipped to keep diseases out.”

A number of countries have been grappling with issues of data in the pandemic, as different countries have used varying criteria or methods in tabulating deaths blamed on COVID-19. In Sweden, too, there has also been some uncertainty over how accurate the reporting of deaths has been.

On Monday, Sweden’s National Board of Health and Welfare published new data on COVID-19 deaths, suggesting that the actual death toll could be 10 percent higher than previous Public Health Agency figures stated.

“The big difference is that we have also included cases which haven’t been tested in a laboratory, but where the doctor responsible has documented that it’s a patient with COVID,” a board representative explained at a press conference.

Deputy state epidemiologist Anders Wallensten said a clear picture can be difficult when there are different methods of reporting in operation.

Wallensten suggested instead comparing the total number of deaths over the recent period to the same period in previous years – known as excess mortality – as a way to identify cases which may not have been reported.

These figures show that Stockholm, the capital, has experienced twice the number of weekly deaths over the March 30-April 19 period this year compared to the same period for the past five years.

While many of the excess deaths may be unrelated to the current pandemic, this nevertheless suggests that actual COVID-19 death toll may be higher than previously thought.

In an op-ed for Euronews, Stockholm-based economics and geopolitical researcher Tae Hoon Kim warned that Sweden’s measures were also potentially problematic in that they don’t take into account the effect they could be having on nearby countries.

A policy implemented in one country can have repercussions for neighboring ones, especially when it comes to contagious viruses, he wrote.

“An outbreak of the virus in [the Danish capital] Copenhagen caused by a Swedish citizen or originating from Sweden will be a complicated issue for both to deal with,” Kim said.