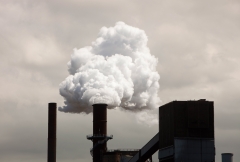 (CNS News) – A study by researchers at the Karlsruhe Institute for Technology (KIT) in Germany showed that because of the lockdowns imposed by COVID-19, CO2 emissions worldwide were estimated to be 8% lower in 2020, but measurements so far have revealed no CO2 decrease in the atmosphere. In addition, the study said that reaching the Paris Accord goal of limiting global warming to 1.5 degrees Celsius would require similar COVID-like lockdowns every year.

The study, entitled Can We Measure a COVID-19-Related Slowdown in Atmospheric CO2 Growth? Sensitivity of Total Carbon Column Observations, was published in the scientific journal Remote Sensing and produced by Dr. Ralf Sussmann, PD, with the Atmospheric Environmental Research Division of KIT's Institute of Meteorology and Climate Research, and KIT researcher Markus Rettinger.

In a statement, KIT said, “The corona pandemic has changed both our working and our private lives. People increasingly work from home, have video conferences instead of business trips, and spend their holidays in their home country. The lower traffic volume also reduces CO2 emissions. Reductions of up to eight percent are estimated for 2020.”

According to the Intergovernmental Panel on Climate Change (IPCC), “cumulative reductions of about this magnitude would be required every year to reach the goals of the Paris Agreement by 2030,” stated KIT. “Recent measurements by researchers of KIT revealed that concentration of carbon dioxide (CO2) in the atmosphere has not yet changed due to the estimated emission reductions.”

He continued, "The restrictions imposed during the corona crisis, however, are far from being sufficient. They have just resulted in a one-time reduction by eight percent. To reach zero emissions in the coming decades, cumulative reductions of the same magnitude would be required every year, i.e. 16 percent in 2021, 24 percent in 2022, and so on.”

“For this, political measures have to be taken to directly initiate fundamental technological changes in the energy and transport sectors,” said Sussmann.

On his first day in office, President Joe Biden issued several executive actions aimed at combating climate change. One of his first was to rejoin the Paris Climate Agreement, which aims to prevent average global temperatures from rising higher than 2 degrees Celsius by 2100.

Biden also halted construction of the Keystone XL pipeline and pledged to cut all net carbon emissions in the U.S. by 2050.

According to Reuters, the chief negotiator of the Paris Accord, Laurent Fabius, argues that we should fight climate change like we battle COVID 19. He contends that climate change “poses an even graver threat“ than the virus.