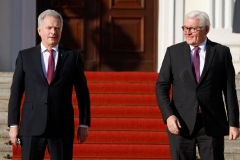 German President Frank-Walter Steinmeier (R) and his Finnish counterpat Sauli Niinisto pose in front of the presidential Bellevue Palace in Berlin during an official welcoming ceremony for the Finnish President on November 22, 2021. (Photo by ODD ANDERSEN/AFP via Getty Images)

(CNSNews.com) - Finnish President Sauli Niinisto characterized the current situation with Russia and the rest of the world as “colder” than during the traditional Cold War.

“You said recently that ‘The post-Cold War era is definitely over.’ So what era are we in now?” CNN’s Dana Bash asked.

“I think that we are actually almost in a colder situation than we were during that traditional Cold War, because, then, we had at least some agreements between the United States and Soviet Union limiting arms and so on. Now we do not have actually anything, no agreements anymore. So this makes the situation, in my opinion, much more vulnerable,” Niinisto told CNN’s “State of the Union” on Sunday.

When asked what the endgame is for Russian President Vladimir Putin, Niinisto said, “What we have seen so far -- and I'm a bit afraid it will continue -- we see Russia pushing forward, then taking a step backwards, then two steps forward, and with all this, like we have noticed, we have, well, been quite confused, and that's maybe the tactics.”

When asked whether he thinks Putin will invade Ukraine, Niinisto said, “I think there are still three alternatives. The first one is that, somehow, they could settle the issue of Eastern Ukraine, Minsk agreement, and all that. I think it's far away.

“Then, second option is that we will see a full-scale war, and the third one, which is as bad, is that we see this kind of, like I described, two steps forward, one back, that is increasing tensions all the time, and the third one might, at the moment, I would say that might be the nearest one, at least,” he said.

As to whether Russia’s aggression makes him concerned that his country could be next given that Finland shares an 830-mile-long border with Russia and is also not a member of NATO, Niinisto said, “First of all, we have to remember that Finland is a stable, long-lasting, more than 100 years, stable democracy, and we are a member of the European Union.

“We are surely part of the West, and the long border line, surely, you have to know geographics, and you can't do anything with that. So, we are not afraid, not at all. Actually, the situation in Finnish border line and in whole Baltic Sea area is now quite peaceful. We are not afraid of Russian tanks suddenly crossing Finnish border,” he said.

Asked whether his country is rethinking whether to join NATO, Niinisto said “There's a lot discussion about that just now” and it will depend on what happens in Ukraine.

“But if things do heat up and become more explosive, so to speak, in Ukraine, you think that your country will lean in to the notion of wanting to be in NATO?” Bash asked.

“At least some of our people are changing their mind. That's very obvious. A lot depends also what actually happens in Ukraine and how Russia is going to behave after that. If Russia sees that it's a big success story for them, that makes them more dangerous,” Niinisto said.