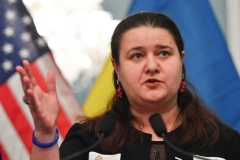 (CNSNews.com) - More citizens of Mariupol in Ukraine were killed by Russians in two months than were killed by Nazis during two years of Nazi occupation during WWII, Ukraine’s Ambassador to the United States Oksana Markarova told CBS’s “Face the Nation” on Sunday.

“Our brave defenders, lots of wounded, a lot of doctors are still there” in Mariupol, Markarova said. “So as of yesterday, we saw the reports and our president has done everything possible to evacuate civilians.

“Now, while that is a success, of course, to get the civilians, women and children out, we have to remember that 95% of Mariupol is destroyed, that tens of thousand civilians died in Mariupol, were killed by Russians. Actually, more Mariupol citizens were killed by Russians in two months than by Nazis during two years of Nazi occupation in- during the World War II,” she said.

“So we are calling on everyone to do everything possible and impossible to get our wounded soldiers, to get our heroes, to create all possible corridors, in order to get our people still out from Azovstal, where they bravely defend the Ukrainian flag and Ukraine in Mariupol,” the ambassador said.

“The U.S. said a few days ago that Russia is planning sham elections, and they're going to try to annex parts of your country, Donetsk, Luhansk in the east, also Kherson. They're already renaming schools and streets, teaching Russian curriculum, forcing the use of their currency,” host Margaret Brennan said.

“So what is dismantling this part of your country actually do? Because if you want to get to a peace negotiation, they're already sort of swallowing parts of your country and trying to integrate it,” she said.

“Well, in addition to all the war crimes they're doing in Ukraine, this is part of their M.O. We saw it in Donetsk and Luhansk, which they occupied in 2014. We saw it in Crimea. So they tried to create the sham elections,” Markarova said.