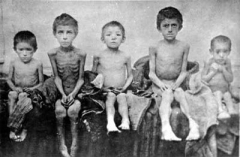 Victims of the Soviet-made famine in Ukraine, the Holodomor, 1932-33. (Screenshot)

(CNS News) -- President Joe Biden issued a statement to honor the victims of the Soviet-orchestrated famine in the Ukraine in 1932-33, a deliberate purge that killed an estimated 3.9 million people, although some death estimates go as high as 7 million.

The government-made famine was so bad that some Ukrainians resorted to cannibalism, and body parts were sold on the street. (Every fourth Saturday in November is Holodomor Remembrance Day.)

"Each November we solemnly honor and pay tribute to the millions of innocent Ukrainians who suffered and perished during the Holodomor – 'death by hunger' – in 1932 and 1933," said President Biden in his statement. 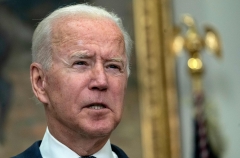 "The men, women, and children who lost their lives during this famine were victims of the brutal policies and deliberate acts of the regime of Joseph Stalin," he said.  "This month, as we commemorate those whose lives were taken, let us also recommit ourselves to the constant work of preventing such tragedies in the future and lifting up those who are suffering under the yoke of tyranny today."

"The Ukrainian people overcame the horror of the Holodomor, demonstrating their spirit and resilience, and eventually creating a free and democratic society," said Biden. "As we remember the pain and the victims of the Holodomor, the United States also reaffirms our commitment to the people of Ukraine today and our unwavering support for the sovereignty and territorial integrity of Ukraine."

Ukrainians trying to flee from their Soviet-controlled republic. (Screenshot)

After the communists took over Russia in 1917, myriad Marxist policies were implemented. In Ukraine, this included the collectivization of the private farms into government-supervised operations and setting high quotas on food production. In addition, wheat grain and other crops were confiscated by communist authorities, redistributed in other republics and sold to foreign markets.

Along with the confiscation of crops, Ukrainians who were considered enemies of the state were arrested or executed, and the Communist Party prohibited Ukrainians from emigrating.

The result was widespread famine, which had its most fatal effects in 1932-33.

As the Holodomor Research and Education Consortium reports,

Dead Ukrainians hauled away in a cart. (Screenshot)

The Holodomor Museum states that, "The question about quantity of human losses in Ukraine from Holodomor remains open. Most researchers advocate the number of victims over 7 million people in the Ukrainian Soviet Socialist Republic and 3 million of Ukrainians in other regions of the USSR: the Kuban, the Central Black Earth region, the Volga region and Kazakhstan."

"Grain and potatoes continued to be harvested in Ukraine, driven by the demand of Stalin's quotas," reported Radio Free Europe/Radio Liberty. "But the inefficiency of the Soviet transportation system meant that tons of food literally rotted uneaten -- sometimes in the open and within the view of those dying of starvation."

"In the countryside, entire villages were being wiped out," stated Radio Free Europe/Radio Liberty. "The hunger drove many people to desperation and madness. Many instances of cannibalism were recorded, with people living off the remains of other starvation victims or in some instances resorting to murder. Most peasant families had five or six children, and some mothers killed their weakest children in order to feed the others."

Melanie Schturyn, the granddaughter of a Holodomor survivor, said, "My grandfather, Stephen Horlatsch, who was himself a child at the time, spoke to me about the horrors he experienced every day: people dropping like flies all around him as he walked to school, communist activists beating women and children for not cooperating in handing over their last bits of food, and executions everywhere he looked. His own mother, my great-grandmother, was brutally beaten before his eyes – a memory which haunted him all his days. 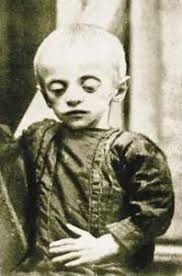 "In the spring, he was sent out to gather edible plants or bark on trees for food so that his mother could throw together some concoction to eat to keep their family alive. This was true for many families. For the people lucky enough to survive the Holodomor, a lasting trauma remained with them the rest of their lives."

Under the Soviets, the Holodomor largely was not reported on. It was hidden, and censored by western media sympathetic to the communist regime. Real research into the government-made famine started in the 1980s and particularly after the collapse of the Soviet Union in 1991.

In November 2006, the independent Ukraine passed a law that recognized the 1932-33 famine as an act of genocide. In 2018, the U.S. House and the Senate recognized the Holodomor as a genocide committed by the Soviet government against the Ukrainian people. Numerous other countries also recognize the atrocity as genocide.