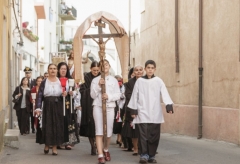 (CNSNews) -- At least eight bishops and three cardinals, including the head of the Congregation for the Doctrine of the Faith under Pope Benedict XVI, and thousands of lay people have signed an Appeal for the Church and the World, decrying how certain governments have used COVID-19 to "control people" and risk imposing "subtle forms of dictatorship."

This must be resisted, say the Church authorities, because "the imposition of these illiberal measures is a disturbing prelude to the realization of a world government beyond all control."

Cardinal Gerhard Mueller, head of the Congregation for the Doctrine of the Faith under Pope Benedict XVI. (Getty Images)

The Appeal to the Church and World was issued on May 7, 2020, to "all Catholics and all people of good will." Some of the main signatories on the document include Mgr. Carlo Maria Viganò, Archbishop, Apostolic Nuncio; Cardinal Joseph Zen, Bishop emeritus of Hong Kong; Cardinal Janis Pujats, Archbishop emeritus of Riga; and Cardinal Gerhard Ludwig Mueller, Prefect emeritus of Congregation of the Doctrine of the Faith.

As the document states at its beginning, "In this time of great crisis, we Pastors of the Catholic Church, by virtue of our mandate, consider it our sacred duty to make an Appeal to our Brothers in the Episcopate, to the Clergy, to Religious, to the holy People of God and to all men and women of good will. This Appeal has also been undersigned by intellectuals, doctors, lawyers, journalists and professionals who agree with its content, and may be undersigned by those who wish to make it their own."

"The facts have shown that, under the pretext of the Covid-19 epidemic, the inalienable rights of citizens have in many cases been violated and their fundamental freedoms, including the exercise of freedom of worship, expression and movement, have been disproportionately and unjustifiably restricted," reads the appeal.

"Public health must not, and cannot, become an alibi for infringing on the rights of millions of people around the world," they write. "Many authoritative voices in the world of science and medicine confirm that the media’s alarmism about Covid-19 appears to be absolutely unjustified."

With COVID-19, "there are powers interested in creating panic among the world’s population with the sole aim of permanently imposing unacceptable forms of restriction on freedoms, of controlling people and of tracking their movements," reads the document.

"The imposition of these illiberal measures is a disturbing prelude to the realization of a world government beyond all control," said the Catholic leaders.

As for controlling and tracking people, "those with governmental responsibility must stop these forms of social engineering," reads the appeal.

"In particular, citizens must be given the opportunity to refuse these restrictions on personal freedom, without any penalty whatsoever being imposed on those who do not wish to use vaccines, contact tracking or any other similar tool," states the appeal.

In a apparent veiled swipe at billionaire Bill Gates, the Catholic leaders write,  "Let us also consider the blatant contradiction of those who pursue policies of drastic population control and at the same time present themselves as the savior of humanity, without any political or social legitimacy."

In working toward a treatment for COVID-19, scientists, pharmaceutical companies, and politicians must be honest and focus on the common good, according to the appeal.

"Every effort must be made to ensure that shady business interests do not influence the choices made by government leaders and international bodies," states the appeal.  "Let us also remember, as Pastors, that for Catholics it is morally unacceptable to develop or use vaccines derived from material from aborted fetuses."

As for governments closing churches and imposing related restrictions, the document states "that the Church firmly asserts her autonomy to govern, worship, and teach. This autonomy and freedom are an innate right that Our Lord Jesus Christ has given her for the pursuit of her proper ends. For this reason, as Pastors we firmly assert the right to decide autonomously on the celebration of Mass and the Sacraments...."

"The State has no right to interfere, for any reason whatsoever, in the sovereignty of the Church," say the Catholic leaders.

The State has no authority to ban "public worship or the exercise of priestly ministry," reads the appeal.  "The rights of God and of the faithful are the supreme law of the Church, which she neither intends to, nor can, abdicate.  We ask that restrictions on the celebration of public ceremonies be removed."

In closing, the religious leaders state, "We are all called to assess the current situation in a way consistent with the teaching of the Gospel. This means taking a stand: either with Christ or against Christ."

"Let us not allow centuries of Christian civilization to be erased under the pretext of a virus, and an odious technological tyranny to be established, in which nameless and faceless people can decide the fate of the world by confining us to a virtual reality," reads the appeal.

"If this is the plan to which the powers of this earth intend to make us yield, know that Jesus Christ, King and Lord of History, has promised that 'the gates of Hell shall not prevail' (Mt 16:18)," they write.

"[J]ust as the Lord will judge us Pastors for the flock which he has entrusted to us," the appeal concludes, "so will He also judge government leaders for the peoples whom they have the duty to defend and govern."