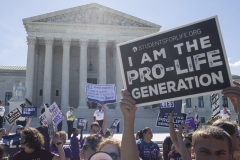 (CNS News) -- A new study shows that most European countries allow elective abortion (without restriction as to reason) prior to 15-weeks gestation of the baby. This is similar to a Mississippi law, now before the Supreme Court, which would limit most abortions to 15 weeks or earlier in a pregnancy.

If the high court rules in Mississippi's favor, it could upend Roe v. Wade by allowing states to restrict elective abortion to 15 weeks instead of the currently accepted 24 weeks, which is when a baby is considered viable.

“Mississippi’s law brings the United States a small step closer both to European and global norms,” said Angelina B. Nguyen, J.D., an associate scholar at the Charlotte Lozier Institute and the author of the new report, Mississippi’s 15-Week Gestational Limit on Abortion is Mainstream Compared to European Laws.

"The majority of European countries that allow elective abortion limit it to 12 weeks," states the report. "This finding demonstrates that Mississippi’s law limiting elective abortion to 15 weeks is neither extreme nor outside the norm in comparison to European practice."

In the study, Nguyen looked at the abortion laws in "50 European countries, independent states, and semi-autonomous regions with populations exceeding 1 million."

Among those states, 42 permit abortion "without restriction as to reason, otherwise known as elective abortion or abortion on demand." Eight of the states, including Great Britain and Finland, require a reason for the abortion.

The study shows the following,

Only three of the 42 states allow elective abortion after 15 weeks' gestation, and these three states are,

“No European nation allows elective abortion through all nine months of pregnancy, as is effectively permitted in several U.S. states, and America is one of only a small handful of nations, along with China and North Korea, to permit any sort of late-term elective abortion," said Nguyen.

"The Mississippi late-term abortion restriction at 15 weeks is not extreme by any measure when compared with European law," concludes the study.