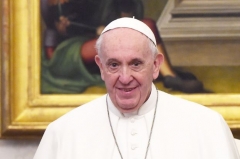 (CNS News) -- In a reaffirmation of the Catholic Church's 2,000-year-old teaching on marriage and on the intrinsic disorder of homosexual acts, the Vatican released a statement on Sunday explaining that the Church does not have the power to bless same-sex unions because it cannot "bless sin."

God "does not and cannot bless sin," reads the statement from the office of the Congregation for the Doctrine of the Faith (CDF). "[T]he Church does not have, and cannot have, the power to bless unions of persons of the same sex...."

The CDF is responsible for explaining and enforcing the teachings of the Catholic Church. The Mar. 15 statement notes that Pope Francis "was informed and gave his assent to the publication" of the statement, which was published in the form of a response and explanatory note (responsum ad dubium).

The responsum ad dubium was signed by Cardinal Luis Ladaria, the head of the CDF, and Archbishop Giacomo Morandi, the secretary of the CDF.

At the top of the document, the question posed to the CDF reads: "Does the Church have the power to give the blessing to unions of persons of the same sex?"

The response given: "Negative."

The document then explains that blessings are a means of conferring grace upon persons who are disposed to receive it. For instance, a married couple with children, adhering to the faith, may receive a blessing from a priest who, through his authority, calls upon God to bless the couple (confer His grace on them).

Or, an individual person may ask for a blessing, which is a request for grace, God's help or protection.

But the person or couple must be requesting the blessing as it adheres to God's moral order, which is distinguished in the natural order of the world. This is why gay unions (or gay marriages) can never be blessed or sanctioned by the Catholic Church in any way. They are outside the moral order established by God.

As the document states, "when a blessing is invoked on particular human relationships, in addition to the right intention of those who participate, it is necessary that what is blessed be objectively and positively ordered to receive and express grace, according to the designs of God inscribed in creation, and fully revealed by Christ the Lord. Therefore, only those realities which are in themselves ordered to serve those ends are congruent with the essence of the blessing imparted by the Church."

"For this reason, it is not licit to impart a blessing on relationships, or partnerships, even stable, that involve sexual activity outside of marriage (i.e., outside the indissoluble union of a man and a woman open in itself to the transmission of life), as is the case of the unions between persons of the same sex," states the CDF.

"The presence in such relationships of positive elements, which are in themselves to be valued and appreciated, cannot justify these relationships and render them legitimate objects of an ecclesial blessing, since the positive elements exist within the context of a union not ordered to the Creator’s plan," reads the document.

Same-sex unions are "not ordered to the Creator's plan." Therefore, they cannot be blessed.

The Catechism of the Catholic Church states, "tradition has always declared that 'homosexual acts are intrinsically disordered.' They are contrary to the natural law. They close the sexual act to the gift of life. They do not proceed from a genuine affective and sexual complementarity. Under no circumstances can they be approved."

The CDF statement further reads, "since blessings on persons are in relationship with the sacraments, the blessing of homosexual unions cannot be considered licit. This is because they would constitute a certain imitation or analogue of the nuptial blessing invoked on the man and woman united in the sacrament of Matrimony, while in fact 'there are absolutely no grounds for considering homosexual unions to be in any way similar or even remotely analogous to God’s plan for marriage and family."

Marriage "is a lifelong, faithful partnership between a man and a woman," teaches the Catholic Church. "It is ordered toward (made for) the good of the spouses and the procreation and education of children."

"At the heart of married love is the total gift of self that husband and wife freely offer to each other, becoming 'one flesh' and being open to children, 'who are a living reflection of their love,'" teaches the Church.

Jesus Christ at the wedding feast in Cana.

The CDF document notes, however, that persons with homosexual inclinations may receive blessings from a priest provided they are trying to live chastely, in conformity with God's moral commandments. The Catholic Church teaches that having same-sex attraction is not sinful but engaging in homosexual acts is sinful.

"The Church recalls that God Himself never ceases to bless each of His pilgrim children in this world, because for Him 'we are more important to God than all of the sins that we can commit," says the CDF. "But he does not and cannot bless sin: he blesses sinful man, so that he may recognize that he is part of his plan of love and allow himself to be changed by him. He in fact 'takes us as we are, but never leaves us as we are.'"

"For the above mentioned reasons, the Church does not have, and cannot have, the power to bless unions of persons of the same sex in the sense intended above," concludes the document.