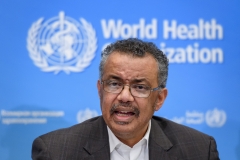 In addition, for children ages four to six, the WHO recommends they be given information "about friendship and love towards people of the same sex" and "same-sex relationships," and be guided to develop "an open, non-judgmental attitude."

These sex education recommendations are detailed in the Standards for Sexuality Education in Europe: A framework for policy makers, educational and health authorities and specialists, published by the WHO Regional Office for Europe and BZgA in 2010.

"The fear that sexuality education might lead to more or earlier sexual activity by young people is not justified, as research results show," according to the WHO.

Parental guidance also is limited according to the U.N. agency. "As argued," reads the document, "parents, other family members, and other informal sources are important for learning about human relationships and sexuality, especially for younger age groups.

"However, in modern society this is often insufficient, because these informal sources themselves often lack the necessary knowledge, particularly when complex and technical information is needed (such as that pertaining to contraception or transmission modes of STI)."

"The development of sexual behaviour, feelings and cognitions begins in the womb," according to the document.

The WHO symbol at the United Nations. (Getty Images)
donate
mrc merch