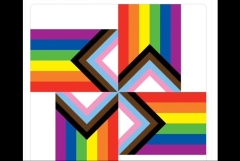 On June 26, former-actor-turned-conservative activist Laurence Fox tweeted a photo of four rainbow Pride flags rearranged to make a swastika. Fox was temporarily suspended from Twitter over the Tweet.

London Assembly member Caroline Russell called on the metro police to investigate Fox for his tweet.

You can openly call the 🇬🇧 a symbol of facism and totalitarianism on Twatter. You cannot criticise the holy flags 🏳️‍🌈🏳️‍⚧️. pic.twitter.com/goKvFHV7x2

“As a @LondonAssembly member and a member of the Police and Crime Committee I hope the Met police will look into Laurence Fox using pride flags to create nazi imagery and posting the images on a public platform,” she wrote. “This is a hate crime.”

As a @LondonAssembly member and a member of the Police and Crime Committee I hope the Met police will look into Laurence Fox using pride flags to create nazi imagery and posting the images on a public platform. This is a hate crime. pic.twitter.com/Xhwgr69r8x

“We cannot have elected officials calling for police forces to arrest political dissidents,” he said.  “I am deliberately provocative, that is the way I go about things. But it is very worrying that an official would call for me to be interrogated by the police. They want concentration camps for people like me – hence the swastika.”

Despite Russell’s hopes, Fox was not arrested for the controversial tweet.

Former police officer and CEO of the Bad Law Project, Harry Miller, explained to the Daily Mail that the police had initially showed up to Brady’s residence ten days prior to his arrest:

“Mr. Brady is British Army Veteran and they were trying to extort him for money by making him pay around £80 for educational course so he could downgrade from a crime to a non-crime, which would still show up in a basic Disclosure and Barring Service (DBS) check.”

According to the Daily Mail, Brady had told the officers he needed to give their ultimatum some time to think it over.

In the meantime, Brady contacted Harry Miller and Lawrence Fox, both of whom were present at Brady’s residence when the police returned on July 28. Both Miller and Fox run the Bad Law Project, which seeks to uphold individual freedoms in the UK.

When the police returned, they placed Brady in handcuffs after he informed them of his decision not to attend the “re-education” class and pay the fine, prompting Fox to begin filming the arrest, which has since gone viral.

While the police were handcuffing Brady, Fox criticized them for choosing to arrest a man for a supposed thought crime. “If you’re expecting a response unfortunately you’re not going to get one from me,” the arresting female police office told Fox.

“I don’t want a response from you. This isn’t about you, this is about this and what’s going on with the police” replied Fox.

Despite her comments beforehand, the female office did chime in. During the argument, Brady described the police officer’s decision to arrest him as “retarded,” prompting the female officer to interrupt the arrest to inform him how offensive his language was.

“You shouldn’t use that word in a public setting,” she lectured. “Again, someone else could find that very offensive.”

Fox summarized the situation to those watching the live stream he was recording, pointing the camera towards a handcuffed Brady, “that’s what happens when you upset someone in this country, nowadays.”

Then turning his camera to each of the three police officers, Fox said, “and these are the people who serve them. That’s your political police force.”

“It’s actually breaking my heart to see you acting like this,” Fox told the three arresting officers.

“They don’t serve without fear or favor. They serve a protected ideology. An untouchable ideology […] every single one of you guys is going to be famous as a result of it,” he said.

“‘And we were just following orders,’ is an excuse other people have used,” Fox reminded the cops.

“Someone has been caused, obviously, anxiety, based upon your social media post. That is why you have been arrested,” said the main police officer.

“Well, you believe the one on the internet but you don’t believe, me?” asked Brady, referring to the person who had reported feeling anxiety as a result of Brady sharing Fox’s post.

The female officer attempted to provide a justification for his arrest, equating expression with physical assault:

“Well, that’s the thing with allegations, isn’t it? Someone can say something and we have to respond to that. In a domestic situation, if a female could say that she’s been hit. Whether it’s happened or not, that’s the allegation that’s been made so we have to act on it.”

CNS News contacted the Hampshire Constabulary to ask if police officers are taught that words can equate acts of physical violence, as implied by the female officer’s comments. Additionally, CNS News asked for the number of years of experience for each of the three arresting officers.

The Constabulary’s press team did not answer either question but provided CNS with the following explanation of the arrest:

“Officers were making enquiries following a report that an offensive image had been shared online. They were investigating an alleged offence under Section 127 of the Communications Act (2003). As such, they attended an address in Aldershot in order to establish the exact circumstances around the social media post.

Following discussions, officers agreed to return to the address on July 28. When officers arrived they were prevented from entering the address to discuss a potential resolution to the matter. As a result, officers felt it was necessary to arrest a man at the scene so they could interview him in relation to the alleged offence.

A 51-year-old man from Aldershot was arrested on suspicion of sending by public communication network an offensive, indecent, obscene, menacing message or matter. He was released under investigation and no further action is being taken in regards to this matter.”

A full video of the arrest can be found here.

The police also arrested Miller for attempting to interfere with the arrest. Miller has since published an op-ed in the Spectator explaining his decision to put himself in between the police and his friend, Brady:

“‘You just conducted an illegal shakedown,’ I said, as I emerged to confront officers. We attempted to resolve the situation peacefully by handing the officers a letter before action addressed to their chief constable. ‘Take it yourself,' they said. 'We’re not postmen.’

"The officers then made their arrest. I immediately placed myself as a barrier between the war veteran and the officers. ‘To arrest this man, you will have to go through me,’ I warned. It may turn out to be the proudest moment of my life.”

Police and Crime Commissioner for Hampshire Donna Jones released the following statement on Friday in response to the arrest:

“I am aware of the video published on Twitter which shows the arrest of two men in Hampshire yesterday, one for malicious communications and one for obstruction of a police officer.

“I have taken this issue up with the Constabulary today and have been advised officers made the arrests following a complaint from a member of the public of an alleged hate crime.

“It follows a post on social media of Progress Pride flags in the shape of Swastika.

“I am concerned about both the proportionality and necessity of the police’s response to this incident. When incidents on social media receive not one but two visits from police officers, but burglaries and non-domestic break-ins don’t always get a police response, something is wrong.

“As Police Commissioner, I am committed to ensuring Hampshire Constabulary serves the public as the majority of people would expect. It appears on this occassion this has not happened.

This incident has highlighted a really topical issue which Hampshire Constabulary and other police forces need to learn from. In order to support this, I will be writing to the College of Policing to make them aware of this incident and encourage greater clarification on the guidance in order to ensure that police forces can respond more appropriately in the future.”

Brady has since been released from jail, according to the BBC.

A spokeswoman for the Hampshire Constabulary also told CNS News that, "it is important to say that our officers come to work every day to protect the public,” and that “they were acting in good faith after being deployed to investigate the report of an offensive image being shared online.”

The spokeswoman included a brief statement in defense of their officers who have since faced significant public scrutiny for their actions:

“Policing reports in relation to online content is a complex and challenging picture. We are engaging further with our Police and Crime Commissioner to make sure that we deploy our resource(s) in a way that reflects need in our local communities.”

At the end of her statement to CNS News, the spokeswoman provided details about the arrest of Harry Miller:

“A 57-year-old man from Market Rasen, Lincs, was arrested on suspicion of obstructing/resisting a constable in execution of duty. He was released under investigation, and our enquiries are ongoing. Due to this being a live investigation we cannot comment further.”

This latest viral incident comes amidst a trend in UK policing of logging so-called “hate incidents” that are not technically crimes but involve instances of wrong-think.

For example, the following tweet from the South Yorkshire Police encourages citizens to “report non-crime hate incidents, which can include things like offensive or insulting comments, online, in person or writing.”

In addition to reporting hate crime, please report non-crime hate incidents, which can include things like offensive or insulting comments, online, in person or in writing. Hate will not be tolerated in South Yorkshire. Report it and put a stop to it #HateHurtsSY pic.twitter.com/p2xf6OLoQZ