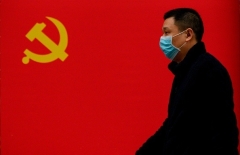 A man passes a Communist Party flag in Wuhan on March 31. (Photo by Noel Celis/AFP via Getty Images)

(CNSNews.com) – Eleven days. That’s how much time passed from the day a 61-year-old Wuhan man became the first known fatality of what would later be labeled COVID-19 – having evidently transmitted the disease to his wife as well – and the day a top Chinese epidemiologist admitted on state television that the new virus was spreading between humans.

During those 11 days, around five million people left the city, scattering across Hubei province, China, and beyond. Among them was a woman who flew from Wuhan to South Korea, where she became the third confirmed COVID-19 case outside of China. (The first two cases, in Thailand and Japan, were also people who had flown from Wuham to those countries, but had done so prior to the 11day period in question.)

The 61-year-old Chinese man who died on January 9 had frequented the Wuhan food market linked to many of the early cases. But when the city’s Municipal Health Commission announced his death on January 11, it did not make public the fact that his wife – who had not visited the market – had begun to display symptoms of the disease five days after he did.

That should have been a clear warning sign that human-to-human transmission was likely occurring.

“We trust our government, and if it’s serious, they’ll be telling us about it and shutting down places but, look, everything is going on normally,” a Wuhan resident told Singapore’s Straits Times on January 10, one day after the man died.

At the time the first death was reported, a University of Minnesota’s Center for Infectious Disease Research and Policy publication cited the center’s director, Dr. Michael Osterholm, as saying that “red flags” on possible human-to-human transmission in Wuhan could include “infections in patients’ family members who weren’t at the market.”

Chinese authorities chose not to wave a “red flag,” however, and the World Health Organization tweeted on January 14 that China’s preliminary investigations “have found no clear evidence of human-to-human transmission of the novel coronavirus identified in Wuhan.”

That same information was relayed in a European CDC statement.

Another week would pass before Chinese epidemiologist Zhong Nanshan, respected for his role during the SARS epidemic in 2003, told state television on January 21 that the new coronavirus was without doubt spreading between humans.

During the eleven days that passed between the first death and Zhong’s public acknowledgement of human-to-human transmission, officials did not warn residents of Wuhan or neighboring areas that the novel coronavirus was showing evidence of being highly infectious.

Instead the city, like the rest of China, was preparing to celebrate the lunar new year festival, a holiday marked each year by massive movements of people across the country. (An estimated three billion trips were made in China over the 40-day period last year.)

On January 18, the residents of a suburb in Wuhan held their 16th annual New Year potluck banquet, which saw tens of thousands of families bring and share food from their homes.

That same day, a Chinese woman visited a hospital in Wuhan and was diagnosed with a cold. Then she flew to the South Korean capital, Seoul, where it was confirmed she had been infected with the coronavirus. She was South Korea’s first confirmed case, and the third outside of China. South Korea today has almost 10,000 confirmed cases, and 169 deaths.

Over the following days – Wuhan’s mayor would later reveal – an estimated five million people, of a total city population of around 11 million, would leave the city.

Many would have been traveling for the new year, including students traveling home from a city with more than one million students at three dozen institutes of higher learning. But an unknown number would likely have left to  evade a looming lockdown, announced on January 22 and implemented from January 23.

When Mayor Zhou Xianwang disclosed the exodus, even the Communist Party-affiliated Global Times declared itself to be shocked.

“Where have these five million people gone?” it asked in an editorial. “How many of them are carriers of the new coronavirus? How many people will be infected because of them? These questions are disturbing.”

Zhou offered to resign, acknowledging anger at the slow release of information to the public about the virus – although he also subtly blamed the central government, attesting to the need for Beijing to approve any data before it was disseminated.

A recent study by researchers at the University of Southampton in Britain estimated that if the Chinese had acted three weeks earlier than they did, the number of COVID-19 cases there could have been reduced by 95 percent.

Specifically, the actions referred to in the research were so-called non-pharmaceutical interventions (NPIs), which include steps such as early detection, the isolation of cases, travel restrictions, and quarantines.

The researchers also found that if the NPIs had been put in place one week, two weeks, or three weeks later than they were, the number of cases across China could have been three, seven, or 18 times higher than they were reported to have been.

Beijing maintains that its actions were rigorous and effective.

“The Chinese government took the most comprehensive, thorough and rigorous prevention and control measures at the earliest time possible, which have been proven to be highly effective at the current stage,” foreign ministry spokeswoman Hua Chunying said on Wednesday.

“Our efforts bought precious time for the world to prepare for the pandemic.”