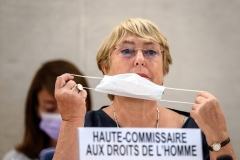 (CNSNews.com) – More than three years after the U.N.’s top human rights official first asked China to allow a visit to Xinjiang to investigate reports of mass-scale atrocities, her office says discussions on “parameters” continue, ahead of a hoped-for visit before the middle of this year.

Rights advocates had been hoping for a visit by U.N. High Commissioner for Human Rights Michelle Bachelet long before the Beijing Olympics – which open later this week – and have also been frustrated by delays in the release of her office’s own report on the western Chinese region.

More than one million minority Muslims are alleged to have been held in incarceration camps in Xinjiang, where both the Trump and Biden administration have said rights violations against Uyghurs and others amount to genocide.

Late last week, the South China Morning Post cited “sources” as saying Bachelet now had Beijing’s approval to visit after the Olympics, “on the condition that the trip should be ‘friendly’ in nature and not framed as an investigation.”

It said Beijing had also insisted that Bachelet’s Geneva-based Office of the High Commissioner for Human Rights (OHCHR) not publish its pending Xinjiang report.

OHCHR spokesman Rupert Colville characterized the South China Morning Post as incorrect, but shed little light on the timing of the publication of the Xinjiang report.

“There are still ongoing discussions about a possible visit during the first half of this year, but clearly it’s not going to take place before the start of the Olympics,” Colville told reporters in Geneva on Friday. “But the parameters of that visit are – are still very much under discussion, there’s no final decision or agreement.”

He said OHCHR had made clear that “it’s important that such a visit be meaningful, with unsupervised access to a wide range of civil society actors and locations, as well as high-level engagement with government officials.”

Colville, who on December 10 said the OHCHR Xinjiang report was expected within several weeks, could offer no update Friday on the timing of its release, but “it clearly is not going to come out before the Olympics start.”

He said there was no linkage between the requested visit and release of the report; “we see these as separate, parallel discussions.”

Colville described the compilation of such reports as a “long and complicated” process, with matters made more complicated by the fact the OHCHR has not been able to go to the location in question.

“My understanding is, we are very much in the last stages of the process, of finalizing such a report.”

Asked about China’s claims of politicization and interference by other governments, Colville said while there were plenty of queries from governments and “stakeholders” on the status of the report, the OHCHR has to “maintain our own integrity and our own credibility in our own products, and not become anybody’s puppet or tool.”

The International Oympic Committee’s decision to grant China the rights to host the Winter Olympics, which open this week, has stoked global controversy. (Photo by Sam Yeh/AFP via Getty Images)

In Beijing, foreign ministry spokesman Zhao Lijian said China had extended an invitation for Bachelet to visit “a long time ago.”

“China’s position is consistent and clear: The purpose of the visit is to promote exchange and cooperation. We oppose any attempt to exploit this matter for political manipulation.”

Asked about claims of a link between a visit and publication of the OHCHR report, Zhao sidestepped the question, and merely repeated Beijing’s talking points to the effect that “Xinjiang enjoys stability and prosperity and residents there lead happy and fulfilling lives with their human rights fully protected.”

(China bristles at any suggestion of outside probing into what it views as internal affairs. Zhao’s remarks on an envisaged Xinjiang visit being designed to “promote exchange and cooperation” echoes Beijing’s insistence that global attempts to determine the origins of the coronavirus outbreak that emerged in Wuhan in late 2019 constitute a “study, not an investigation.”)

‘I regret that I am not able to report progress’

China has been a member of the U.N.’s Human Rights Council for almost the entire 16-year existence of the Geneva-based intergovernmental body. The HRC over its lifetime has not passed a single resolution condemning or even voicing concern about rights abuses in that country.

In September 2018, just days after taking up her post, Bachelet first expressed hope the Chinese government would allow a visit to Xinjiang, citing “deeply disturbing allegations of large-scale arbitrary detentions” in the region.

Since then she has reported periodically to member-states on attempts to arrange a visit:

Jun. 2019: “I continue to raise issues related to Xinjiang and other matters bilaterally with the government of China, and discussions concerning unfettered access to the province by my office are ongoing.”

Sept. 2020: “Following an invitation extended by the government of China, I have been discussing with the authorities the conditions of a possible visit to Xinjiang when conditions are conducive.”

Feb. 2021: “I am confident that through our ongoing dialogue we will find mutually agreeable parameters for my visit to China.”

Jun. 2021: “I continue to discuss with China modalities for a visit, including meaningful access, to the Xinjiang Uyghur autonomous region, and hope this can be achieved this year, particularly as reports of serious human rights violations continue to emerge.”

(In response to that comment, China’s mission to the U.N. advised Bachelet “to stop making erroneous remarks against China, and refrain from interfering in China's sovereignty and judicial independence.”)

Sept. 2021: “I regret that I am not able to report progress on my efforts to seek meaningful access to the Xinjiang Uyghur autonomous region. In the meantime, my office is finalizing its assessment of the available information on allegations of serious human rights violations in that region, with a view to making it public.”

UN Leadership, Member-States Accused of ‘Silence, Fear and Timidity’ Over Xinjiang (May 13, 2021)