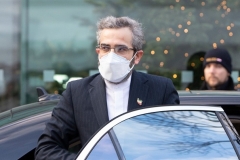 Iranian chief nuclear negotiator Ali Bagheri Kani arrives at the venue of the nuclear talks in Vienna, where participants are talking about finalizing a day within days. (Photo by Alex Halada/AFP via Getty Images)

(CNSNews.com) – More than 160 House Republicans have signed a letter to President Biden, signaling their intention to try to halt any deal made with Iran that is not approved by Congress.

With 32 Senate Republicans having sent a similar message last week, the fresh initiative means that 77 percent of Republicans in the House and 64 percent in the Senate are now warning the president that the agreement he is seeking could be in jeopardy unless Congress signs off on it.

Talks in Vienna aimed at salvaging the 2015 Joint Comprehensive Plan of Action (JCPOA), which President Trump exited in 2018, are approaching a point of decision, according to participants.

The French foreign minister said on Wednesday it was now “a matter of days,” not weeks, and White House principal deputy press secretary Karine Jean-Pierre said Thursday that “a deal that addresses the core concerns of all sides is in sight.”

Led by Reps. Mike Gallagher (R-Wisc.) and Michael Waltz (R-Fla.), the GOP lawmakers cited reports indicating that the Iranian regime is demanding a “guarantee” that the U.S. will not reimpose sanctions if Tehran complies with the terms of a nuclear agreement.

“As duly elected representatives of American citizens across the United States, sent to Washington to check and balance the executive branch as established by the separation of powers in our Constitution, we feel compelled to remind you that you do not have the power to provide any such ‘guarantee,’” they wrote.

Any agreement reached with the regime without congressional approval “will be temporary and non-binding, and will meet the same fate as the Joint Comprehensive Plan of Action.”

The Obama administration when finalizing a deal with Iran seven years ago decided not to pursue a treaty that would require Senate ratification.

Congress then passed the Iran Nuclear Agreement Review Act (INARA), requiring the president to send to Congress any Iran nuclear agreement documents, within five days of an accord being reached.

Congress would then have an opportunity to review and possibly vote on the deal in the form of a “resolution of disapproval.”

That process unfolded in the fall of 2015, but in a series of procedural votes in the Senate, opponents of the JCPOA failed to advance the resolution of disapproval.

Despite the renewed calls for the Biden administration to submit any nuclear deal to Congress, attempts to kill it via the INARA process will be an uphill battle.

Even if a resolution of disapproval should pass, overturning a likely presidential veto would require two-thirds majorities in both the House and Senate.

In 2015, only four Senate Democrats joined Republicans opposing the JCPOA.

The Gallagher-Waltz letter said that if the administration continues to “ignore Congress,” the signatories would view any agreement not submitted as a treaty for Senate advice and consent to be non-binding.

They would also insist that it be submitted to Congress as required by INARA, and “use the law’s 30-day review period to warn our colleagues, the American public and the private sector about any dangers and flaws of such an agreement.”

The signatories also pledged to work to restore and strengthen any Iran sanctions lifted or eased by an agreement, including those relating to the regime’s support for terrorism, missile programs, or human rights abuses; and to oppose any attempt to rescind the Trump administration’s 2019 designation of the Islamic Revolutionary Guard Corps as a foreign terrorist organization.

A key paragraph in the letter outlined the lawmakers’ view of what a nuclear deal should encompass:

“We will oppose any agreement that lifts U.S. sanctions on the Iranian regime without first verifying they have fully accounted for all past and present undeclared nuclear activities, fully dismantled their enrichment and reprocessing-related infrastructure and capabilities, verifiably ended all research and development on nuclear-capable missiles and fully dismantled all existing nuclear-capable missiles, verifiably halted all sponsorship of terrorism, released all American hostages and paid U.S. federal court judgements owed to the American victims of terrorism sponsored by the Iranian regime.”

None of those criteria was fully or even partially met by the Obama-Biden administration’s 2015 deal.

--Enrichment and reprocessing infrastructure was restricted but not fully dismantled under the JCPOA.

--Iran’s missile programs, terror sponsorship, and the imprisonment of Americans did not feature in the nuclear talks. The administration contended that a narrow focus on the nuclear issue was more likely to achieve an agreement that dealt with the biggest danger – Iran’s suspected nuclear weapons ambitions.

--Finally, the question of Iran’s accounting for “past and present undeclared nuclear activities” was never settled to the satisfaction of critics of the deal.

Under the JCPOA, Iran was expected to disclose to the International Atomic Energy Agency (IAEA) the so-called “possible military dimensions” (PMD) of its nuclear program activities, past and present.

The IAEA board in December 2015 agreed to close the PMD file, paving the way to JCPOA implementation a month later.

But opponents called the move a “whitewash,” frustrated among other things by the fact the U.N. agency had allowed the Iranians themselves to collect and hand over environmental samples from a military site near Tehran where some of the most serious nuclear weapon-related work was suspected to have been done.

A trove of documents and electronic files relating to the nuclear program, covertly acquired by the Israelis from a warehouse in Tehran in 2018, called into question the veracity of the regime’s earlier PMD disclosures.

In their letter, the GOP lawmakers also alluded to concerns that the administration’s desire to achieve success in Vienna may be linked to its response to Russia’s threatening activities around Ukraine.

They pointed out that the U.S. and Iran are not negotiating directly – at Iran’s insistence – and that as a result Russia is serving as an “intermediary.” (The other parties to the JCPOA, China, Britain, France, Germany, and the European Union are also involved in that capacity.)

“As part of our legislative oversight responsibility, we will investigate any connections between the negotiations in Vienna over Iran’s illicit nuclear program – in which we are relying upon the Russians as our intermediary because the Iranians refuse to negotiate with us directly – and the negotiations with the Russians regarding their invasion of Ukraine,” they wrote.

“If your dependency on the Russians to revive the JCPOA is weakening our deterrent posture with the Russians in other areas of the world, the American people deserve to know.”

See also:
After Biden Waives Iran Sanctions, Senators Remind Him They Must Sign Off on Any Deal (Feb. 8, 2022)