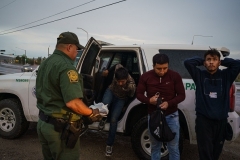 (CNSNews.com) – The number of “encounters” with migrants trying to enter the U.S. illegally at the southwest border, and coming from countries other than Mexico and the Northern Triangle, hit a new record high in December – 79,678 – more than ten times higher than the same month in each of the previous four years.

The headline figure in the data released by the CBP on Monday shows that total migrant encounters along the southwest border during December – irrespective of countries of origin – stood at 178,840, an increase of 141.6 percent from the same month in 2020, and up 340.8 percent from December 2019.

Mexico, predictably, accounted for the largest number of encounters along the southwest border last month – 51,285, compared to 39,370 in December 2020.

But the sharply climbing figures for the “other than” countries are in themselves significant, given the Biden administration focus on addressing what it calls the “root causes” of illegal migration specifically in the northern triangle countries – corruption, violence, and “the worsening impacts of climate change.”

Of the total 178,840 encounters in December, 44 percent of the individuals stopped were processed for expulsion under Title 42, the public health authority to expel migrants without a court hearing due to concerns about the spread of COVID-19, the CBP reported.

The other 56 percent were processed under Title 8, which “refers to the physical control or temporary detainment of a person who is not lawfully in the U.S. which may or may not result in an arrest.”

The CBP provides “encounter” figures rather than numbers of actual individuals apprehended along the border, because it says in many cases people who are stopped and sent back, try again.

Of the 178,840 encounters recorded in December and reported on Monday, 23 percent involved migrants who had been encountered at least once before over the previous 12-month period.