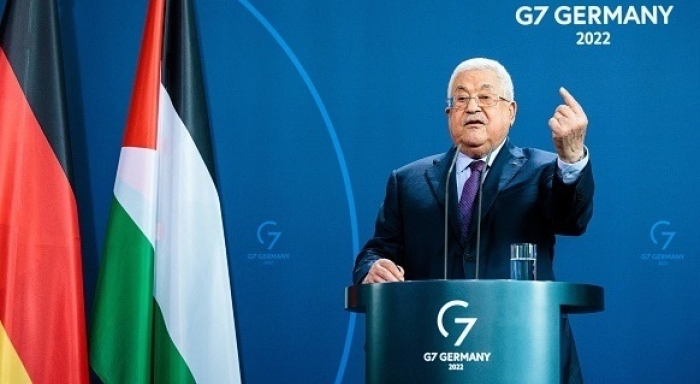 (CNSNews.com) – German Chancellor Olaf Scholz on Tuesday rejected Palestinian Authority chairman Mahmoud Abbas’ use of the term “holocausts” to describe the killing of Palestinians, after what a German opposition leader called “the most disgusting speech ever heard in the German Chancellery.”

It was the second time in the course of several hours that Scholz took issue with language used by Abbas. During a joint press conference in Berlin earlier, he had challenged the Palestinian leader’s use of the word “apartheid” to describe Israeli policies.

When he had the opportunity to respond, Scholz said the German government had “a different assessment of Israeli policy.”

“I want to say explicitly at this point that I do not adopt the word ‘apartheid’ and I do not consider it appropriate to describe the situation,” he said.

Apartheid (literally “apart-ness” in Afrikaans) was the policy of statutory racial discrimination in every facet of life, harshly enforced by South Africa’s white minority government from 1948 until dismantled ahead of the first democratic election in 1994.

In recent years its use by Palestinians and their backers in relation to the Israeli-Palestinian conflict has become increasingly commonplace. It is seen by Israel and its supporters as a ploy designed to delegitimize it – a multi-ethnic democracy in which the Arab minority actively participates in the political process.

If Abbas’ use of the word “apartheid” made waves, towards the end of the press conference he trod into significantly more sensitive territory when he declared – in the capital of Germany – that Israel has committed “holocausts” against Palestinians for decades.

He did so after being asked by a German reporter if he planned to apologize for the PLO’s terrorist attack at the Munich Olympic Games – 50 years ago next month – which killed 11 members of Israel’s Olympic team and a German policeman.

Abbas in response did not refer directly to the Munich massacre, but instead accused Israel of having committed “50 massacres, 50 holocausts” against Palestinians from 1947 until the present day.

“If we want to continue digging into the past, yes please!” he said. “I have 50 massacres committed by Israel.” 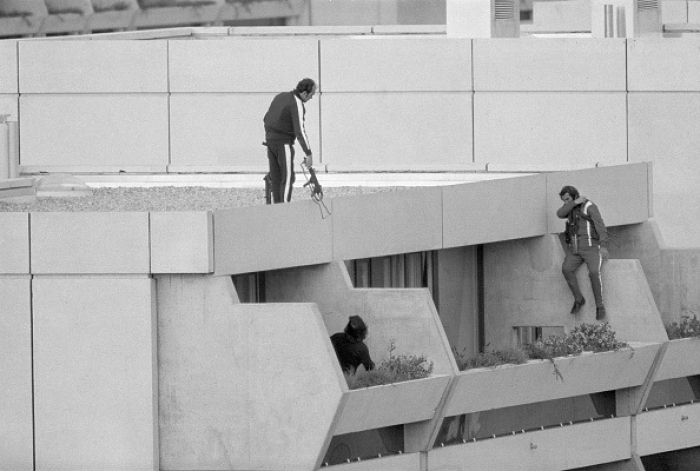 In an unsuccessful rescue operation, German police dressed as athletes drop into position on a terrace directly above the Munich apartments where PLO terrorists were holding members of the Israeli Olympic team hostage in September 1972. (Bettman/Getty Images)

Scholz grimaced but did not respond verbally, and the press conference was ended moments later, with the two shaking hands before exiting.

The chancellor’s response came later in the day, when he told the Bild newspaper, “For us Germans in particular, any relativization of the Holocaust is intolerable and unacceptable.”

Scholz later tweeted that same comment, adding that he was “disgusted” by Abbas’ “outrageous remarks,” and saying, ‘I condemn any attempt to deny the crimes of the Holocaust.”

“The PLO leader would have gained sympathy if he had apologized for the terrorist attack on Israeli athletes at the Munich Olympics 1972,” he tweeted. “Accusing Israel of ‘50 Holocausts’ instead is the most disgusting speech ever heard in the German Chancellery.”

“Six million Jews were murdered in the Holocaust, including one and a half million Jewish children. History will never forgive him.”

(Abbas’ 1982 doctoral thesis at a Soviet university, later published as a book, disputed what he called “the Zionist fantasy, the fantastic lie that six million Jews were killed” by the Nazis during World War II.)

Abbas chose on Tuesday not to comment on the 1972 Munich massacre, but when attack mastermind Mohammed Oudeh (aka Abu Daoud) died in 2010, Abbas hailed him as a national hero.

When another of the Munich attack planners, Amin Al-Hindi, died the same year, Abbas gave him a military funeral.

Abbas, 86, is a controversial figure who retains the title of “president of the state of Palestine” despite the fact his four-year term expired more than 13 years ago. Palestinian presidential elections have been postponed repeatedly since 2010, and the last legislative election was held in 2006.

Scholz on Tuesday alluded to the legitimacy issue: “We think that if you live in a country like Germany, where elections are held every four years, then it’s been a bit of a long time since 2006 and there could be another election.”

Abbas, as he frequently does, attributed the situation to Israel’s refusal to allow Palestinians living in eastern Jerusalem to vote in P.A. elections. There are about 6,000 Palestinian residents of Jerusalem eligible to vote, and around 2.8 million eligible voters in the West Bank and Gaza.

Biden: It’s Essential ‘That Abbas be Recognized as Leader of the Palestinian People, Which He Is’ (May 24, 2021)