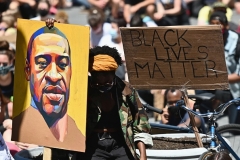 A "Black Lives Matter" protest in front of Borough Hall on June 8, 2020 in New York City. (Photo by ANGELA WEISS/AFP via Getty Images)

(CNSNews.com) – Relatives and supporters of African-Americans killed by police are calling for a U.N. inquiry – and in doing so are appealing to a body whose elected members include regimes accused of slavery, suppression of press freedom, and the sentencing to death of homosexuals and “blasphemers.”

In an initiative led by the ACLU and backed by hundreds of non-governmental organizations, the families of George Floyd, Breonna Taylor, Philando Castile, and Michael Brown are calling on the U.N. Human Rights Council (HRC) to convene an emergency session “on the escalating situation of police violence and the repression of protests in the United States.”

In a letter sent to Geneva on Monday, they said the session should lead to an independent inquiry into “the recent history of racist policing in cities across the country” and “allegations of excessive use of force against peaceful protesters and journalists.”

The signatories want the HRC to call on the U.S. to grant those carrying out the inquiry full access to witnesses, including police officers; as well as the right to inspect places of detention and to monitor trials.

“It is time the United States face the same scrutiny and judgment it is quick to pass on to other countries,” said ACLU Human Rights Program director Jamil Dakwar.

“As communities in the United States call on their leaders to divest from policing and end structural racism, the United Nations must support these domestic demands by holding the United States accountable for its human rights violations.”

The Geneva-based HRC is due to resume a regular session next Monday.

A spokesman for the HRC secretariat, Rolando Gomez, confirmed that the letter had been received, but explained that “in order for a special session of the HRC to be held, one-third of its 47 members must support the call.”

“For the moment, no official request has come in from states, yet it is likely this issue is raised at the upcoming resumed Council session proposed to start next week.”

Discussions are currently underway around how that session will look, given COVID-19 restrictions. Gomez said it was proposed that a reduced number of delegates meet – to allow for social distancing – while others take part via video..

During a virtual briefing on Monday to discuss how to proceed, he said, HRC member-states had “observed a minute of silence to express solidarity with the Black Lives Matter movement, at the request of South Africa.”

In looking to the HRC for support, the signatories are petitioning a body that includes among its members regimes frequently criticized for abusive policies and practices:

--The death penalty for same-sex sexual acts is effective in two HRC members, Sudan and Somalia, and is possible in four others, Afghanistan, Mauritania, Pakistan, and Qatar, according to the International Lesbian, Gay, Bisexual, Trans and Intersex Association.

--The death penalty for “blasphemy” is effective in two members, Pakistan and Mauritania, while in five – Afghanistan, Qatar, Somalia, Sudan, and Mauritania again – “apostasy” is punishable by death, either compulsorily or in principle, according to Humanists International’s latest Freedom of Thought Report.

--Mauritania, has “the world’s highest proportion of slaves, mostly the black Africans, in indenture that is socially justified with reference to Islam,” according to the Freedom of Thought Report. Another HRC member, Sudan, has a long and recent history of slavery, and efforts continue to free individuals from servitude.

--The effective enslavement of migrants, mostly black Africans and South Asians, has been reported in two HRC members, Libya and Qatar.

HRC members serve three-year terms. The composition changes partially every year, with elections held annually for one-third of the seats.

If the ACLU-led demand does lead to HRC action and the establishment of some sort of inquiry, by the time it reports back to the council the membership could well include additional countries that are frequently accused of severe rights abuses.

They include Cuba, Russia and Saudi Arabia, all of which have announced candidacies for a new term beginning next January; and China, which is expected to do so soon.