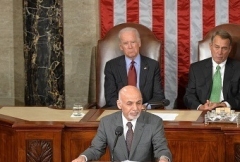 (CNSNews.com) –  During his first press conference on Thursday, President Biden within the space of 30 seconds made three gaffes when responding to a question about Afghanistan.

He got a name wrong; he implicitly questioned the status of an elected U.S. ally who is Afghanistan’s head of state and commander-in-chief of the armed forces; and he corrected himself on “if” troops leave to “when we leave.”

When asked about one of the three gaffes, Biden reversed himself. The other two raised no comment.

“You face a May 1st deadline for the withdrawal of U.S. troops” from Afghanistan, said Ken Thomas of the Wall Street Journal. “As a candidate, in Foreign Affairs, you wrote that it is past time to end these forever wars. Can you commit to the American people that by May 2nd the U.S. will no longer have forces in Afghanistan?”

“The answer is that it’s going to be hard to meet the May 1 deadline,” Biden began. “Just in terms of tactical reasons, it’s hard to get those troops out.”

Biden said he and Secretary of State Antony Blinken have been meeting with NATO and other allies with troops in Afghanistan.

“We will leave,” Biden interjected. “The question is, when we leave.”

Asked whether he thought it possible that U.S. troops could still be deployed in Afghanistan next year, Biden replied, “I – I can’t picture that being the case.”

During his remarks on Afghanistan, Biden noted that Defense Secretary Gen. Lloyd Austin had visited the country this week.

“General Austin is – just met with Kayani and I’m waiting for the briefing on that,” he said. “He is the – the, uh, the ‘leader,’ quote, in Afghanistan and Kabul.”

It’s not clear why Biden described the president as “the ‘leader,’ quote, in Afghanistan and Kabul,” although it may have had something to do with two consecutive disputed elections.

Ghani assumed the post of president after a 2014 whose outcome was contested. He began a second term in March 2020, again after a drawn-out dispute. The Obama and Trump administrations respectively sought to break the logjams in 2014 and in 2019-2020. In 2014, Ghani’s main rival Abdullah Abdullah was given the newly-created post of “chief executive,” akin to a position of prime minister – a post Abdullah held until March last year.

Biden’s reference to “Kayani” rather than “Ghani” may have been a slip of the tongue.

The most prominent person by that name in South Asia is Ashfaq Kayani, the military general who headed Pakistan’s controversial Inter-Services Intelligence (ISI) agency from 2004-2007, was army chief of staff from 2007-2013, and was widely viewed at the time as the most powerful man in Pakistan.

Biden’s foreign policy credentials have been burnished over a long political career. During his 36 year as a senator, he served as chairman of the Senate Foreign Relations Committee from 2001-3 and again in 2007-8. As vice president under President Obama he played an important foreign policy role, and when campaigning for the White House Biden frequently drew attention to the wide extent of his engagements with world leaders.

He also has a record of making gaffes over the years, including on foreign policy issues – and Afghanistan has been among them.

In late 2011, Biden was quoted as telling Newsweek magazine in an interview that the Taliban “is not our enemy.”

“Look, the Taliban per se is not our enemy. That’s critical,” he continued. “There is not a single statement that the president [Obama] has ever made in any of our policy assertions that the Taliban is our enemy because it threatens U.S. interests.”

Mitt Romney, then running for the Republican nomination in the 2012 presidential election, called the comment “bizarre, factually wrong, and an outrageous affront to our troops carrying out the fight in Afghanistan.”

According to the Pentagon, 1,913 U.S. military personnel have been killed in combat in Afghanistan since Operation Enduring Freedom was launched in October 2001, after the Taliban’s al-Qaeda allies attacked America on 9/11. The vast majority of those fatalities were attributed to the Taliban and its affiliate, the Haqqani network.