Afghanistan IG: ‘No One in the Government Has Been Held Accountable’ 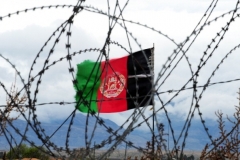 Afghanistan’s national flag flies behind barbed wire at a military base in Nangarhar province in 2014. (Photo by Roberto Schmidt/AFP via Getty Images)

(CNSNews.com) – The special inspector general for Afghanistan reconstruction told lawmakers on Wednesday that his office has issued 11 reports and 600 audits since its creation in 2008, but that despite “all of the reports we’ve done, no one in the government has been held accountable.”

“I always joke that the only person who’s ever going to get fired over Afghanistan is probably going to be me,” John Sopko told the House Foreign Affairs subcommittee that deals with international development.

“Nobody else,” he said. “Not the generals who came up [to the Hill] and spun and spun and spun, and the ambassadors and aid administrators who gave bogus data to you. None of them have been held accountable.”

“You have to hold people accountable, ma’am,” Sopko told Rep. Sara Jacobs (D-Calif.), who was questioning him at time during the virtual hearing.

“It is the role of Congress to protect the taxpayers’ purse – and it’s through oversight and withholding funds and sending messages to certain errant bureaucrats. Bring ’em up. Hold people accountable, congresswoman.”

SIGAR was created as a result of legislation signed into law in 2008, mandate to audit U.S.-funded reconstruction programs and operations and to investigate allegations of waste, fraud, and abuse relating to those programs. Sopko has led the office since 2012.

He told the panel reconstruction efforts in Afghanistan had cost U.S. taxpayers more than $145 billion over 20 years.

“Our work demonstrates that no single policy decision nor administration led to the failure of our reconstruction effort,” he said. “Rather, it was a series of decisions made over two decades that led us to this point.”

First, he described as one the reconstruction missions most significant failures the U.S. government’s “inability to get the right people into the right jobs at the right time.”

“While the State Department has statutory authority, for example, to lead security sector assistance efforts overseas, it does not have the personnel, expertise, or resources to do so,” he said. “This left the Defense Department to fill that void, resulting in less qualified and poorly trained personnel undertaking key diplomatic and development roles.”

“If better monitoring and evaluation processes had been in place to evaluate programs, to combat corruption, develop the economy, build the Afghan security forces, many of the problems that contributed to the rapid collapse of the Afghan state could have been corrected.”

Thirdly, Sopko argued that the U.S. government did not understand the political and cultural context in Afghanistan.

He said this led to “empowering corrupt power brokers and politicians, forcing inappropriate western technocratic models on Afghan institutions, imposing formal western rule of law on a country that addressed most disputes through informal means, and struggling to understand and mitigate cultural barriers to supporting women and girls.”

As a result, he said, projects that were intended to mitigate conflict often made it worse.

Asked if SIGAR had seen any successes during its monitoring, Sopko said there had been some.

“So there were successes,” he said. ‘But overall there were a lot of failures.”