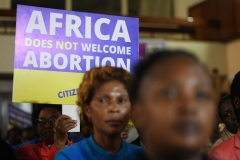 Pro-life activists rally near the U.N. International Conference on Population and Development in Nairobi, Kenya, in November 2019. (Photo by Simon Maina/AFP via Getty Images)

(CNSNews.com) – President Joe Biden’s refunding of organizations that carry out or advocate for abortion around the world has prompted appeals by pro-life African women – stop imposing abortion on our pro-family, pro-faith culture by financing the activities of giant abortion providers.

In a recent online video produced by Culture of Life Africa, African women from different countries and walks of life urged Biden not to “sponsor” abortion in Africa.

Last week Biden, mirroring the actions of  the previous two Democratic presidents as they took office, rescinded the Mexico City Policy, a Reagan-era measure that bars federal funding to organizations carrying out or promoting abortions abroad. The move was welcomed by organizations like the International Planned Parenthood Federation (IPPF) and Marie Stopes International (now MSI Reproductive Choices), which lost millions of dollars in U.S. funding during the Trump administration as a result of the policy.

Biden said in a memorandum had prohibiting the funding had undermined U.S. “efforts to advance gender equality globally by restricting our ability to support women’s health and programs that prevent and respond to gender-based violence.”

In the video, Culture of Life Africa founder Obianuju Ekeocha recalled Biden’s appearance in 2019 at a Planned Parenthood Action Fund forum for 2020 presidential candidates, where he described people like himself as “saviors” of those living in developing countries.

Biden was talking about the fact that President Trump in 2017 had broadened the Mexico City policy, making it provisions applicable to all U.S. foreign health assistance, not just funding for family planning programs as had been the case under previous Republican administrations.

“We have over $8 billion dollars in health care assistance around the world, and he’s trying to apply Mexico City standards to that. It’s dead wrong. People are dying around the world.”

“We are their saviors around the world,” Biden added, pointing towards himself.

Moments later, he continued, “I think you don’t get nearly enough credit, Planned Parenthood. That – you are the ones who are providing for all of the healthcare for poor women in ways that nobody else has been able to. That’s why Barack [Obama] and I fought so hard to continue to see you’re funded.”

“So, watching this man who is praising the work of Planned Parenthood, talking about getting rid of the Mexico City Policy altogether, and talking about himself and his pro-abortion peers as being the saviors of people in the developing world, talking about funding abortion overseas. This I find quite horrifying, to be honest, because I know what exactly that means.”

The video featured short statements from Africans, directed at the Biden administration.

“This is a request, actually a plea, to the incoming American president, Joe Biden, to please not fund abortion in African countries,” said a young woman named Amaka, while Ellen, a student, said, “In my culture, we support life from the beginning till the end.”

“I am an African and an African woman,” said Chisom, a project manager. “I do not believe in taking life, destroying it, nor killing it. We do not need abortion. Why must abortion be funded, and given priority in my country?”

“Abortion is murder, and funding it makes you an accessory,” said Mary Esther, a banker. “Please, don’t do it.”

“Please, we don’t want funding, any form of funding for abortion,” said Uchechi, a student nurse. “We’re not interested, it’s not our priority.”

“This is an appeal to the U.S. government, not to fund abortion in the African states,” said Marion Lisa, a lawyer. The African community, she said, was built on principles including “the sanctity of life, equal dignity for all, protecting the weak and the vulnerable.”

“God will never bless a nation that destroys its children,” said Rose, a student teacher, while Nigerian beauty entrepreneur Stella Maris, after outlining some of the pressing needs in Africa including poverty alleviation and education, concluded, “Please help us, don’t kill us.”

Wrapping up the clip, Ekeocha said that whenever Africans are surveyed on the matter, they reject abortion.

“The question now is this: Will President Joe Biden listen to us? Will he recognize the voice of the African people? Will he respect the cries of the heart of the ordinary African person? Or, will he just be the neo-colonial master, like many other Western leaders?”

“I hope not,” she said. “Please President Joe Biden, listen to the voice of the Africans.”