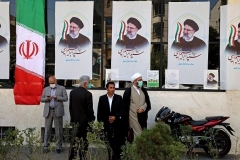 (CNSNews.com) – As Iran’s presidential election approaches, polling inside the country indicates that calls from various organizations for voters to stay away to show their disapproval of the clerical establishment and its version of “democratic” elections may be making headway.

The latest survey by the Iranian Students Polling Agency (ISPA), conducted early this week, found that 37.7 percent of respondents who were eligible said they would “definitely” vote on June 18, down from 43.7 percent two weeks earlier.

Earlier this year, polling by IranPoll and the Center for International and Security Studies at the University of Maryland found 52.7 percent of Iranian respondents said they would “definitely” vote.

Even the highest of those three figures, 52.7 percent, would be the lowest turnout in a presidential election in Iran since the 1979 revolution.

Boycott calls have come from students inside the country, and dissidents at home and in exile, driven by a range of agendas but all targeting its regime’s ability to point to a high voter turnout as proof of legitimacy and national unity in the face of outside criticism.

As is routine in Iran, in the run up to the election the Council of Guardians, a judicial-religious body partly appointed by supreme leader Ayatollah Ali Khamenei ruled on which candidates could run. On this occasion it disqualified more than 580 hopefuls – including all women applicants – approving just seven candidates.

Evidently concerned about the possiblity boycott calls may be gaining traction, Khamenei’s office has placed on its official website’s homepage a lengthy article about a speech Khamanei gave three months ago, under the headline, “The Leader: High voter turnout is crucial in electing the right president”

It said Khamenei stressed the importance of a high election turnout, drawing attention to “the extensive effort of the enemies to make the nation apathetic towards voting.”

“Ayatollah Khamenei said that the participation of people in the elections will highlight the power of the nation to the world and demonstrate national authority and power,” it said.

Khamanei accused the “spy apparatuses of some countries,” notably the U.S. and Israel, of “trying to destabilize the elections” by criticizing the electoral process and discouraging people from voting.

In a speech last week, Khamenei again touched on the subject.

“Everyone should consider himself to be responsible for encouraging others to participate [in the election] and he/she must participate as well,” he said, invoking a verse from the Qur’an.

‘Slap in the face’

High levels of participation in presidential and legislative elections have long been a point of pride for the regime, with officials typically calling strong turnouts “a strong message to hegemonic powers” or “a slap in the face” and “a punch in the mouth” of Iran’s foes.

Turnout in legislative elections has also been relatively high in past years.

After legislative polls in 2016, Kayhan, a hardline publication whose editor is appointed by the supreme leader, called the 62 percent turnout “a popular, firm and strong riposte to outside powers pressuring Iran over its perfectly normal democracy and human rights record, as well as to their smear campaigns, especially in the United States, accusing Iran of having no democracy at all.”

Legislative elections in February last year, however, saw fewer than 43 percent of eligible voters turnout, the lowest recorded rate since 1979.

Khamenei at the time accused enemies of exaggerating the threat of the still-emerging coronavirus epidemic in a bid to discourage people from voting. (Iran reported its first COVID-19 death two days before the election. Today the official death toll exceeds 81,000, and the real number is suspected to be significantly higher.)

When Foreign Minister Javad Zarif, the regime’s “moderate” face to the outside world, has been challenged by Western audiences about regime abuses or a lack of democratic freedom, he sometimes points to election turnout in rejecting the allegations.

He did so at an event in Sweden in 2019, for example, after a local reporter asked about the regime’s mistreatment of those whose lifestyles or politics do not “fit the Islamic law, according to the ayatollah.”

“If our government was trampling upon the rights of its people, as you seem to claim, 73 percent of the population would not turn out to vote,” Zarif replied. “These same people would not be supporting the government.”

Recalling that then-Defense Secretary Jim Mattis had said Iran presidential elections were “a sham” because of the Guardian Council candidate vetting and approval process, Zarif told Rose that Mattis had overlooked the fact “that people in Iran waited in line for ten hours – to vote for a sham?”

“Iranians could have stayed home,” he added.