Ahead of US-Iran Soccer Clash, WH Distances Itself From Altered Iran Flag Controversy 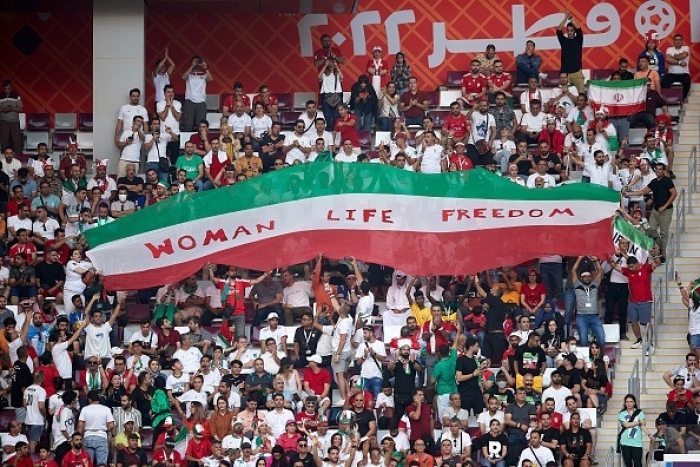 Iranian soccer fans hold up a banner in support of the protests in their homeland, during last week's World Cup game between Iran and England in Doha. (Photo by Juan Luis Diaz/Quality Sport Images/Getty Images)

(Update: The United States beat Iran 1-0 in Tuesday’s game, and advances to the next round of the World Cup. Iran has been eliminated.)

(CNSNews.com) – National Security Council Coordinator for Strategic Communications John Kirby on Monday distanced the Biden administration from a decision by the U.S. Soccer Federation to temporarily post an altered version of Iran’s national flag on social media in support of Iranian protesters.

“I am not aware of any conversations by anybody in the U.S. government that had anything to do with their decision either to post that image previously, and then to take it down and replace it,” Kirby told reporters at a White House press briefing.

He said the USSF was a “private entity” that makes its own decisions “about those kinds of things.”

State-affiliated media in Iran voiced outrage over the weekend incident, in which the U.S. soccer body posted on its social media feeds a flag featuring the green, white, and red stripes of Iran’s national banner but missing the emblem of the Islamic Republic, which represents part of the Islamic creed known as the shahada – “There is no god but Allah.”

Also missing were the two lines of stylized text along the edges of the green and red stripes, repeating the phrase Allahu Akbar (Allah is greater).

The USSF included the altered flag in a points table graphic looking ahead to Tuesday’s World Cup match in Qatar between the United States and Iran.  It said in a statement it had wanted to post the image for 24 hours in a show of support for “the women in Iran fighting for basic human rights.”

The federation subsequently took down the image, but Iran’s soccer governing body demanded that the world governing body, FIFA, expel the U.S. Men’s National Team (USMNT) from the World Cup, claiming a “violation of international and ethical rules.” 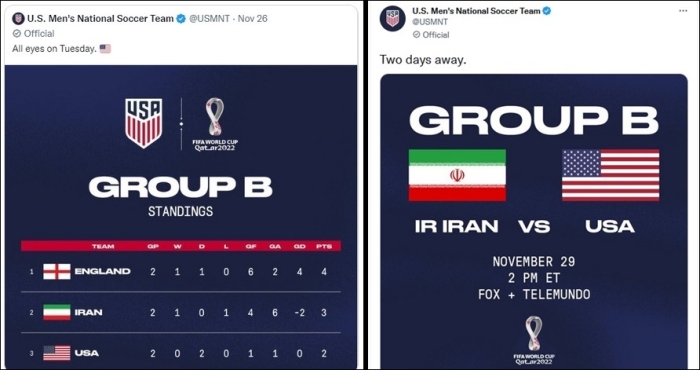 Tweets posted by the U.S. Soccer Federation over the weekend show (left) an altered version of the Iranian flag, and (right) an image of the actual flag. (Screen grabs: Twitter)

The regime-affiliated Tasnim news agency weighed in: “By posting a distorted image of the flag of the Islamic Republic of Iran on its official account, the US football team breached the FIFA charter, for which a 10-game suspension is the appropriate penalty,” it tweeted. “Team USA should be kicked out of the World Cup 2022.”

Asked at the briefing if the White House had any comment on the decision to post the altered Iranian flag, Kirby demurred.

“No, actually, we don’t,” he said, adding that it wasn’t “the kind of thing” that the White House would comment on.

“USA Soccer is a private entity, and they – they make their own decisions about those kinds of things,” Kirby said.

“We wouldn’t comment on that,” he said. “We wish them all the best tomorrow.”

Iranians have been protesting against the regime for more than two months, in a movement sparked by the death in custody of a 22-year-old woman arrested by the “morality police” for allegedly infringing strict Islamic dress regulations.

Members of the Iranian national soccer team, in an apparent show of solidarity with their protesting compatriots, did not sing their country’s national anthem at the start of their opening game. 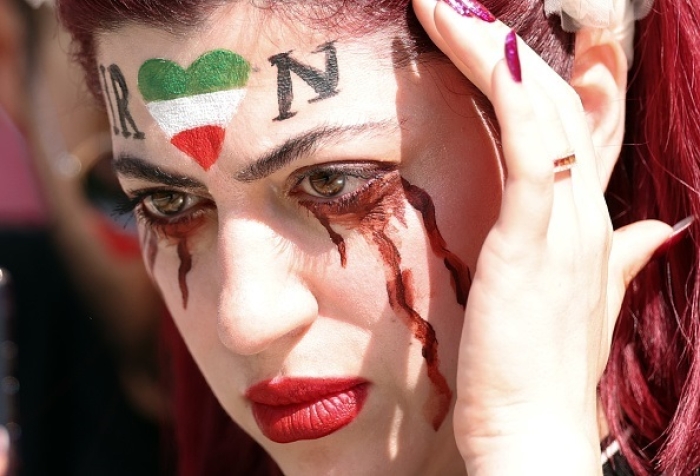 An Iranian fan during Iran’s World Cup game against Wales on Friday. (Photo by Getty Images)

Altered versions of the Iranian flag have been seen in the stands at the World Cup venues, in some cases with the word IRAN replacing the Islamic Republic emblem, in others, with the words “Women, Life, Freedom” painted across the three stripes – a reference to the slogan being chanted by protestors at home.

Also in evidence have been “lion and sun” flags, Iran’s national flag before the 1979 Islamic revolution.

At least one Iranian fan was photographed outside a stadium carrying an Iranian flag, sporting a large hole in the center where the Islamic Republic emblem would normally have been.

‘In the U.S. we’re continuing to make progress every single day’

At a press conference ahead of Tuesday’s clash, U.S. Coach Gregg Berhalter said the players and staff were not party to the USSF decision to post the image, and “all we can do on our behalf is apologize on behalf of the players and the staff.”

Berhalter said the team was focused on the game.

“Of course, our thoughts and – are with the Iranian people and the whole country, the whole team, everyone. But our focus is on this match.”

Seated alongside Berhalter, USMNT captain Tyler Adams faced some loaded questions from a reporter with Iran’s state-funded Press TV, who first chided the U.S. representatives for mispronouncing “Iran,” and then asked him about racism in America.

“Are you okay to be representing a country that has so much discrimination against black people in its own borders,” the Press TV journalist asked Adams, who is black.

“My apologies on the mispronunciation of your country,” Adams responded. “Yeah, that being said, you know, there’s discrimination everywhere you go. You know, one thing that I’ve learned, especially from living abroad in the past years and having to fit in in different cultures and kind of assimilating to different cultures, is that in the U.S. we’re continuing to make progress every single day.”

A game that was always going to be politically charged because of the history and state of relations between the U.S. and Iran took on higher stakes when it became clear that a loss or draw for the U.S. will mean its elimination from the world’s most widely viewed sports event. The U.S. must win to advance to the next round, which reduces the original 32 national teams to 16.

Iran will also be eliminated if it loses to the U.S., although an Iranian draw could see it edge through to the next round, depending on the outcome of another, simultaneous game, between England and Wales.

Iran has been in six World Cups, but has never advanced to the second round, so much is riding on the game.

The U.S. has reached 11 World Cups, frequently advancing to the knockout stage, and reaching the quarterfinals in 2002 and the semifinals in 1930. Iran knocked the U.S. out of the 1998 competition.

The U.S. is in 16th place in FIFA’s current world men’s rankings; Iran is ranked 20th.