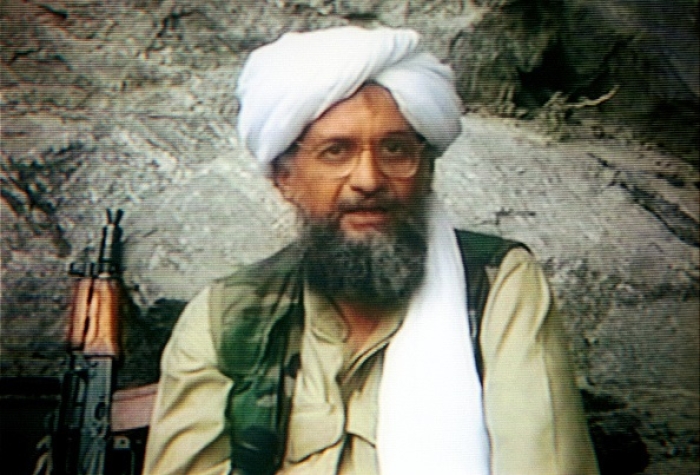 (CNSNews.com) – Ayman al-Zawahiri, the Egyptian terrorist who served as Osama bin Laden’s deputy before taking over as al-Qaeda leader after bin Laden’s death 11 years ago, was killed in a weekend U.S. drone strike in Taliban-ruled Kabul, where he had been living since earlier this year, President Biden confirmed on Monday night.

“He carved a trail of murder and violence against American citizens, American service members, American diplomats, and American interests,” Biden said in remarks from the Blue Room balcony at the White House, citing Zawahiri’s central role in major terrorist attacks targeting America, including 9/11.

“From hiding he coordinated al-Qaeda’s branches and – all around the world, including setting priorities, providing operational guidance, called for and inspired attacks against U.S. targets.”

“Now, justice has been delivered. And this terrorist leader is no more,” Biden said. “The United States continues to demonstrate our resolve and our capacity to defend the American people against those who seek to do us harm.”

With the death of the 71-year-old, the terrorist network’s senior most surviving leaders are two men believed by U.S. intelligence agencies to be based in Iran.

Zawahiri, an Egyptian physician with Muslim Brotherhood links, in the late 1990s merged his own terrorist faction, Egyptian Islamic Jihad, into bin Laden’s network. He was one of five Islamist radicals to sign bin Laden’s 1998 fatwa announcing the “International Islamic Front for Jihad Against the Jews and Crusaders,” and declaring war on America.

With a $25 million U.S. reward on his head, Zawahiri was linked to al-Qaeda’s deadliest attacks, including the bombing of the U.S. embassies in Nairobi, Kenya, and Dar es Salaam, Tanzania on Aug. 7, 1998 (224 killed, including 12 Americans); the bombing of the USS Cole in Yemen’s Aden port on Oct. 12, 2000 (17 U.S. sailors killed); and most notably the September 11, 2001 attacks (2,977 people killed when planes hijacked by al-Qaeda terrorists flew into the World Trade Center in New York, the Pentagon, and a field in rural Pennsylvania).

He became al-Qaeda leader after U.S. Navy SEALS raided a compound in Abbottabad, Pakistan on May 2, 2011 and killed bin Laden.

As that operation raised questions about bin Laden’s ability to live undetected in a house less than half a mile from a top Pakistani military academy, so the drone strike that killed Zawahiri in a house he was living in in downtown Kabul raises questions about the Taliban’s role in providing safe haven for the fugitive terrorist.

According to reports from the capital, the drone strike early Sunday morning local time targeted a house in Sherpur, an upscale neighborhood close to foreign embassies – including the closed U.S. Embassy – and major ministries of the Taliban regime that seized power almost a year ago.

A senior administration official briefing on background said that after the CIA drone strike, members of the “Haqqani Taliban” took steps to conceal Zawahiri’s former presence there, including moving his wife and other family members to another location.

Earlier on Monday, a Taliban interior ministry spokesman, Abdul Nafi Takoor, denied that a drone strike had occurred, but said that a “rocket” had hit an “empty” house in Sherpur.

Just hours before Biden spoke, Taliban spokesman Zabihullah Mujahid issued a statement complaining about a drone strike in Kabul – without mentioning the target – and charging that it was a violation of the February 2020 U.S.-Taliban Doha agreement.

That same agreement included a Taliban pledge not to allow Afghanistan’s territory to be used by groups bent on attacking the U.S. or its allies. Biden in his remarks Monday said that Zawahiri had “made videos – including in recent weeks – calling for his followers to attack the United States and our allies.” 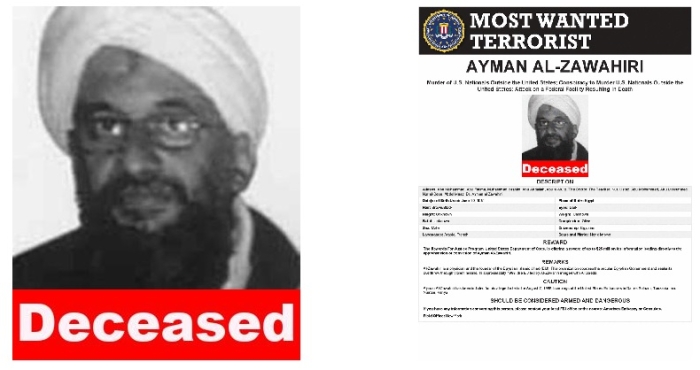 The FBI wasted no time Monday in adding the word “Deceased” to its “most wanted terrorist” web page for Ayman al-Zawahiri. (Screengrab: fbi.gov)

Western security experts were widely skeptical that the group would in fact sever its longstanding ties with al-Qaeda. Those ties triggered the U.S. invasion in the first place, after the Taliban regime then controlling most of Afghanistan refused to surrender the al-Qaeda terrorists following 9/11.

Just a fortnight ago, a U.N. sanctions monitoring committee report stated that Zawahiri was “confirmed to be alive and communicating freely,” issuing regular video messages.

The report said Zawahiri’s “apparent increased comfort and ability to communicate has coincided with the Taliban’s takeover of Afghanistan and the consolidation of power of key al-Qaeda allies within their de facto administration.”

“Al-Qaeda leadership reportedly plays an advisory role with the Taliban, and the groups remain close,” it said, but assessed that al-Qaeda and affiliates would not likely seek to carry out direct attacks outside the country in the short term, “owing to a lack of capability and restraint on the part of the Taliban, as well as an unwillingness to jeopardize their recent gains.”

It maintained, however, that al-Qaeda “is considered a significant threat to international security over the long term.”

The committee’s report also listed the next most senior al-Qaeda leaders after Zawahiri, in order as:

--Saif al-Adl, a senior terrorist indicted by a federal grand jury in 1998 for his involvement in the 1998 embassy bombings in East Africa, believed to be located in Iran. The State Department is offering a reward of up to $10 million for information on him.

--Abdal-Rahman al-Maghrebi, Zawahiri’s son-in-law, also believed to be based in Iran. The State Department is offering a reward of up to $7 million for information.

--Al-Qaeda in the Islamic Maghreb (AQIM) leader Yazid Mebrak (aka Abu Ubaydah Yusuf al-Anabi). The State Department is offering a reward of up to $7 million for information.

--Al-Shabaab leader Ahmed Diriye (aka Abu Ubaidah). The State Department is offering a reward of up to $6 million for information.