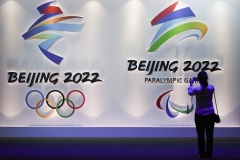 A visitor in Beijing takes pictures of logos for the 2022 Winter Olympic Games. (Photo by Wang Zhao/AFP via Getty Images)

(CNSNews.com) – The International Olympic Committee’s decision to allow Beijing to host next year’s winter Olympics has drawn criticism around the world, but the body’s head said Wednesday it must remain politically neutral if the games are to retain their “unifying power.”

But as a non-governmental organization, he said, “we have neither the mandate, nor the capability, to change laws of sovereign countries.”

“We cannot solve human rights issues which generations of politicians were unable to solve.”

Bach was speaking in a video message relayed to the U.N. Human Rights Council in Geneva, during a discussion on “Sport and the Olympic ideal.”

“At the Olympic Games, we are all equal, everybody respects the same rules, standing together in solidarity,” he said. “This universality and inclusiveness that define the Olympic Games require the IOC to be politically neutral.”

During interventions by non-governmental organizations, the IOC’s awarding of the 2022 Winter Olympics to Beijing came under fire.

Vincent Metten of the Helsinki Foundation for Human Rights recalled that when the Chinese capital hosted the summer games in 2008, the IOC declared that hosting the event would “encourage China to embrace transparency and human rights.”

“Instead, the 2008 Olympics emboldened policies of the Chinese Communist Party that are fundamentally adverse to human rights principles and norms,” he said in a statement submitted to the HRC.

Metten said a coalition of human rights groups called on the IOC last September to revoke its awarding of the 2022 games to Beijing, and last February more than 180 civil society organizations urged governments to commit to a diplomatic boycott of the event.

“Will heads of state go to China in light of the genocide that is ongoing against the Uyghur people, while they are sitting there in their seats?” he asked.

“What moral authority do they have to speak about human rights any place in the world, clapping for the Chinese government as they commit genocide?” 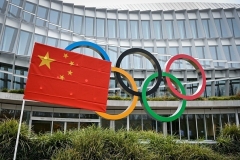 A Chinese national flag is seen in front of IOC headquarters in Lausanne, Switzerland, during a protest against the Beijing 2022 Winter Olympics. (Photo by Fabrice Coffrini/AFP via Getty Images)

Neuer also criticized American and other companies planning to sponsor the Beijing games.

“Many today in corporate America have declared themselves as supporters of human rights yet Bridgestone, Intel, Visa, Airbnb, Coca Cola, Omega, Panasonic, P&G, Samsung, and Toyota will all be represented in Beijing as Olympic partners, the highest level of sponsorship available,” he said.

“Mars [Wrigley] will be there too, handing out Snickers, the official chocolate of the 2022 Winter Olympics,” he added. “Madame President, will corporate sponsors of the games look the other way on China’s gross and systematic abuses, out of concern for their bottom line?”

Governments allied to China spoke out against what they called attempts to politicize sport.

“Unfortunately, we have to note that attempts to use sport as a tool of pressure in international politics have increased recently,” said Russia’s representative. “Under the pretext of alleged human rights violations, individual countries are calling for boycotts of international sports forums.”

“We appreciate China’s efforts to host the Beijing 2022 Olympic and Paralympic Winter Games, in a safe and splendid Olympic event,” said the representative of Venezuela’s Maduro regime, while Cuba’s delegate said the Havana regime “reiterates our rejection of attempts to politicize sport.”

“Western countries are actively using the theme of sport to pursue their political goals against undesirable countries under the specious pretext of ‘caring for human rights,’” said the representative of Belarus.

“The DPRK [Democratic People’s Republic of Korea] reiterates its unequivocal stand to oppose all acts and attempts of abusing sport for despicable political purposes under the pretext of human rights, which are contrary to the desire and aspiration of humankind for building a more peaceful world through sport,” declared North Korea’s delegate, using the Stalinist-ruled country’s official name.

The HRC has in recent years become a platform for competing statements by liberal democracies deploring Beijing’s policies against minority Muslims in Xinjiang and its stifling of democratic freedoms in Hong Kong; and governments supporting China and criticizing outside “interference in its domestic affairs.”

See also:
State Dept: ‘Not Going to Offer Advice to US Companies From This Podium’ on Boycotting Beijing Games (April 7, 2021)