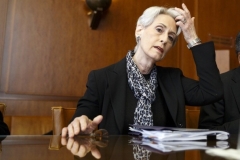 Wendy Sherman, now deputy secretary of state, during her previous posting as undersecretary for political affairs in the Obama administration. (Photo by Valentin Flauraud/AFP via Getty Images)

(CNSNews.com) – The State Department is being “hamstrung” by delays in confirming the administration’s nominees for a range of important diplomatic posts, a senior official told the Senate Foreign Relations Committee on Tuesday.

Deputy Secretary of State Wendy Sherman did not address reasons for the delays, a key one being “holds” placed by Sen. Ted Cruz (R-Texas) on all State Department nominees in response to the administration’s approach to the Nord Stream 2 gas pipeline from Russia to Germany.

Cruz has led bipartisan criticism on Capitol Hill to the administration’s decision to waive sanctions against the company behind the pipeline, followed by its deal with Germany essentially allowing the project to go ahead.

“I look forward to lifting the holds just as soon as they impose the sanctions on Nord Stream 2 that are required by federal law,” he told CNN last month.

“We are currently hamstrung in our ability to advance America’s interests around the world, without confirmed ambassadors and senior leaders,” she said.

Sherman noted that among numerous nominees yet to be confirmed are Daniel Kritenbrink, nominated as assistant secretary of state for East Asian and Pacific affairs, and Jose Fernandez, nominated as undersecretary for economic growth, energy, and the environment.

Menendez told Sherman the committee would continue to work to see nominees confirmed.

“It’s incredibly important for any administration to have their nominees to be able to conduct foreign policy on behalf of the United States.”

Menendez did not mention the holds placed by Cruz, although the two have clashed before over the issue.

At a committee meeting in late June, Menendez deplored the practice of holding up the process for reasons not related to the positions to which nominees have been named.

“I cannot recall a time when there was a blanket holdover on career nominees, people who sacrifice to serve their country and then are held in limbo – presumably because of an unhappiness over policy that has nothing to do with the positions for which they have been nominated and over which they have no influence,” he said.

During an exchange later in the meeting, he said, “Senator Cruz, this committee has had a long history which you are blackening by virtue– by virtue of turning– of turning the committee’s business for a political purpose.”

“Mr. Chairman, what political purpose is that?” Cruz asked.

Cruz pointed out that he had done so in support of a policy that Menendez has himself agreed with – the need to sanction of the Nord Stream 2 pipeline in line with U.S. law.

He said it was a policy “that the Biden administration has deliberately undercut and given a gift to – to Putin and Russia.”

“And, at least in the prior administration, you agreed with that,” Cruz told Menendez.

When Secretary of State Antony Blinken in May announced the decision to waive sanctions against the consortium led by Russia’s state-owned gas giant, which is leading the pipeline project, Menendez sharply criticized the move.

As recently as Monday, Menendez joined eight European counterparts – the chairs of parliamentary foreign affairs committee in Britain, Ireland, Estonia, Latvia, Lithuania, Czech Republic, Poland, and Ukraine – in a statement opposing the Biden administration’s deal with Germany over the pipeline.

“We consider Nord Stream 2 a geopolitical project geared towards expanding Russia's influence on Europe by dominating the energy market,” they said. “The completion of the pipeline will strengthen the impact of Russian gas in the European energy mix, endanger the national security of E.U. member states and the United States, and threaten the already precarious security and sovereignty of Ukraine.”

The administration argues that it opposes Nord Stream 2 but the project was 90 percent complete by the time it took office and there was nothing sanctions could have done to prevent its completion.

(Under the Trump administration, the threat of sanctions alone saw contractors abruptly stop work on the pipeline for most of last year, only resuming after last November’s U.S. election.)

The State Department says the U.S.-Germany agreement aims to mitigate the risks of Russia using the new pipeline as leverage in future disputes with Ukraine, which depends on transit revenue from Russian gas now crossing its territory through existing pipelines.