Amid Tensions With Iran, US Air Force B-52s Fly With Israeli, Saudi, and Qatari Fighters 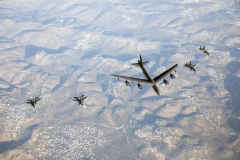 (CNSNews.com) – In a mission designed to “deter aggression and reassurepartners and allies,” two U.S. Air Force B-52 strategic bombers flew across the Middle East early this week, accompanied at various times by warplanes from Israel, Saudi Arabia, and Qatar.

Ten days after President Biden ordered retaliatory airstrikes against Iran-backed militia near the Iraq-Syria border, the B-52H Stratofortress bombers flew to the region from the Minot Air Force Base, North Dakota, in what U.S. Central Command (CENTCOM) said was the fourth temporary bomber deployment to the Middle East this year.

“These missions reiterate the U.S. Air Force’s global reach capability and commitment to regional security,” said U.S. Air Force Central Command, while CENTCOM said the aim of the multinationalpatrol missionwas to “deter aggression and reassurepartners and alliesof the U.S. military’s commitment to security in the region.”

The bombers’ joint operation with Saudi F-15s came on the same day Iran-backed Houthi militia in Yemen carried out drone and missile attacks against Saudi oil infrastructure. The kingdom’s defense ministry said the exercise with the U.S. aircraft focused on “capabilities, air control and operational integration.”

Israeli F-15s accompanied the American bombers through Israeli airspace, in what the Israeli Defense Forces (IDF) called “another layer in the strategic cooperation with American forces, which is a cornerstone in maintaining the security of the skies of the State of Israel and the Middle East.”

Tensions between Iran and Israel, always relatively high, flared again at the weekend after Israeli Defense Minister Benny Gantz told Fox News that the IDF was updating its plans to strike Iranian nuclear facilities if it was deemed necessary. Iranian defense minister Brig. Gen. Amir Hatami said in response Iran would raze the cities of Tel Aviv and Haifa to the ground if Israel makes “a mistake.”

The latest B-52 patrol in the region comes less than two months after the Pentagon announced that it was moving Israel to CENTCOM’s area of responsibility (AOR), from that of the U.S. European Command – a shift reflecting the widening circle of acceptance of Israel in the Arab world, and a shared perception of the threat posed to regional stability by the Iranian regime.

When CENTCOM was established in 1983, with an AOR that stretches from Egypt to Pakistan, Israel was not included under its purview because the Arab world, with the exception then of Egypt, did not recognize or have relations with the Jewish state. Israel as a result fell within the AOR of European Command, based in Stuttgart, Germany.

After normalization agreements last year with the United Arab Emirates, Bahrain, Morocco and Sudan, the Trump administration decided the time was right to amend the anomaly and include Israel with the rest of its neighborhood.

“The easing of tensions between Israel and its Arab neighbors subsequent to the Abraham Accords has provided a strategic opportunity for the United States to align key partners against shared threats in the Middle East,” the Pentagon said in mid-January.

“Israel is a leading strategic partner for the United States, and this will open up additional opportunities for cooperation with our U.S. Central Command partners while maintaining strong cooperation between Israel and our European allies.”

Prior to Sunday’s mission, previous U.S. bomber missions over the Central Command region took place on January 27, 17, and 7, on December 10, and on November 20. In each case they originated from Minot AFB or Barksdale AFB in Louisiana, more than 7,000 miles away from the Saudi peninsula, and in some cases the B-52s flew with partner nations’ fighters.

After the December mission, a senior Iranian air force commander said the bombers had flown to around 150 kilometers (93 miles) from the country’s borders, and warned that any violation of Iran’s airspace would be “among our red lines.”

“The smallest violation will be met with the air defense forces’ crushing and fiery response,” said Brig. Gen. Qader Rahimzadeh of the Khatam al-Anbia Air Defense Base, the division oversees the regime’s land-based air defense operations.