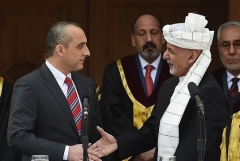 (CNSNews.com) – As the Taliban seeks to consolidate its hold on Afghanistan, signs of a nascent resistance are starting to appear, centered around men with close links to the fundamentalist militia’s historical foe, the Northern Alliance.

Vice President Amrullah Saleh, one of the country’s most outspoken critics of the Taliban, declared on social media Tuesday that under the constitution he is acting head of state.

He noted that the constitution provides for the first vice president to become caretaker president in the event of the “absence, escape, resignation or death” of the president.

President Ashraf Ghani flew out of the country at the weekend as the Taliban advanced on Kabul. He is thought to be either in Tajikistan or Oman.

In a posted audio clip, Saleh said Ghani had “effectively left his responsibilities vacant and his position vacant. I am currently the legitimate caretaker president of Afghanistan, because I am inside the country. I am reaching out to all leaders of Afghanistan to consolidate this position and this statement that I have just made.”

“I want to make it very clear that there are many factors why this situation happened,” he continued. “I am not ready to be part of the humiliation and shame that the foreign militaries have endured. I am standing for my country and the war is not over.”

Saleh’s tweets, in English and Pashto, were receiving tens of thousands of likes, with responses from Afghans ranging from derision to declarations of ardent support, including from military personnel.

Saleh did not identify his location, but still and video footage posted on social media Tuesday showed him in Panjshir, a picturesque valley and province three hours’ drive from Kabul that had the distinction of never falling under either Taliban control during the jihadists rule from 1996-2001, or that of the Soviet Union during its decade-long occupation.

Panjshir reportedly is the once province in Afghanistan that has not been taken over by the Taliban in recent weeks. 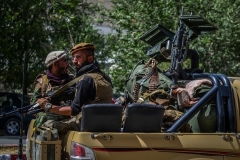 Panjshir, Saleh’s birthplace, is most famously associated with Ahmed Shah Massoud, the veteran Northern Alliance leader known as the “Lion of Panjshir” who fought the Soviets and the Taliban before his assassination, evidently by al-Qaeda, on the eve of the 9/11 terror attacks.

Saleh was an aide to Massoud – both were ethnic Tajiks – and he fostered significant ties then and later with U.S. and allied intelligence agencies.

After the Taliban was toppled by U.S. and Northern Alliance forces, Saleh became head of Afghanistan’s National Security Directorate intelligence agency from 2004 until 2010, when he resigned amid differences with President Hamid Karzai over how to deal with the Taliban threat.

He is known both for his opposition to the Taliban and his sharp criticism of the Pakistani ISI military intelligence agency’s longstanding colluding with the terrorists.

After Ghani fled and Kabul fell to the Taliban at the weekend, Saleh posted a defiant message on Twitter:

“I will never, ever & under no circumstances bow to [the] Talib terrorists. I will never betray [the] soul & legacy of my hero Ahmad Shah Massoud, the commander, the legend & the guide. I won’t disappoint millions who listened to me. I will never be under one ceiling with the Taliban. NEVER.”

Back in May, as the withdrawal of U.S. and coalition forces moved ahead, Ahmad Massoud announced the establishment of a new anti-Taliban “Second Resistance” movement comprising several thousand fighters.

Massoud’s appearance in Panjshir with Saleh, in conjunction with Saleh’s claims to be “caretaker president,” suggest they will be working together.

Another figure to watch will be Gen. Bismillah Khan Mohammadi, who was appointed defense minister by Ghani last June.

“We will liberate Afghanistan from these terrorists,” he tweeted on Monday, whereabouts unknown. “I am not so unscrupulous as to sit around a table with the killers of thousands of defense forces and innocent civilians, and declare my support for this terrorist group.”

Mohammadi, who served as a senior commander in Massoud’s Northern Alliance during the civil war, is also a Panjshir-born ethnic Tajik. He recently survived a Taliban assassination attempt – an attack on his Kabul home that killed eight people.

Saleh, too, has survived two deadly assassination attempts, in 2019 and 2020.