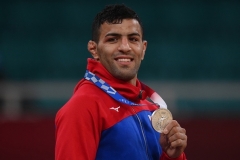 Iranian-born Saeid Mollaei, competing for Mongolia, wins a silver medal in his judo category at the Tokyo Olympics on Tuesday. (Photo by Franck Fife/AFP via Getty Images)

(CNSNews.com) – In a tale of contrasts from the Tokyo Olympics, two Arab judokas (judo practitioners) have withdrawn to avoid facing an Israeli opponent, while a former Iranian judoka who defected several years ago after facing anti-Israel pressure from the regime dedicated his silver medal win to Israel.

The much-hyped Olympic spirit was nowhere in sight when Mohamed Abdalrasool of Sudan chose not to turn up rather than fight Israel’s Tohar Butbul on Monday. Butbul won by default, and went on to beat a Moldovan before being eliminated in a quarterfinal match by a South Korean judoka.

The International Judo Federation responded by suspending Nourine and his coach pending a disciplinary hearing and sanctions. It said they had acted “in total opposition to the philosophy of the International Judo Federation,” which has “a strict non-discrimination policy, promoting solidarity as a key principle, reinforced by the values of judo.”

The IJF has yet to announce any action regarding Sudan’s Abdalrasool.

Arab and Islamic governments’ hostility towards Israel has resulted in similar incidents at sporting events in past years, although Sudan late last year recognized and established diplomatic relations with Israel, one of four Arab states to do so under agreements brokered by the Trump administration.

The Olympic Charter states, “Any form of discrimination with regard to a country or a person on grounds of race, religion, politics, gender or otherwise is incompatible with belonging to the Olympic Movement.”

Two years ago, Iranian-born judoka Saeid Mollaei, a 2018 world champion in his class, was ordered by the regime in Tehran to throw a match at the World Judo Championships, also in Tokyo, so that he would not advance to meet Israel’s Sagi Muki in a subsequent round.

The instruction, which came in a phone call from a regime minister, was reportedly accompanied by threats against him and his family at home.

Mollaei defied the order, beat his Russian opponent, and advanced to beat a Canadian in the next round. Meanwhile, pressure increased, with unauthorized visits to a restricted part of the venue by Iranian Embassy officials, and a phone call from the head of Iran’s national Olympic committee, warning Mollaei that security officials were at his parents’ home.

He advanced to the semifinal, but after losing to a Belgian admitted that he had not performed his best. (Muki went on to win the final.)

After the championships, Mollaei sought asylum in Germany, and was later granted Mongolian citizenship. 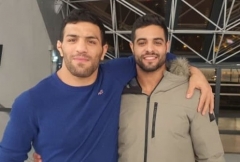 The IJF slapped a four-year ban on Iran’s judo federation, citing the incident.

Last February Mollaei took part in an IJF competition in Israel, where he was warmly received. In Tehran, the head of Iran’s judo federation accused him of having turned his back on his homeland and said he should be ashamed.

This month Mollaei returned to the Olympics in Tokyo under the Mongolian flag. After winning the silver medal on Tuesday, he told an Israeli sports channel his medal was “dedicated also to Israel,” thanking Israelis for their support.

Muki, who was knocked out earlier, said he was “super happy” for Mollaei, who he called a “very close friend.”

“He deserves it – his journey is incredibly inspiring,” Muki told reporters.

Hailing Mollaei’s success and recalling his plight and defection, U.N. Watch executive director Hillel Neuer tweeted, “When Ayatollah Khamenei’s poisonous regime falls, millions of Iranian men and women will finally be free to embrace Israelis and all of humanity.”

Len Khodorkovsky, a former senior advisor to the Trump administration’s special representative for Iran Brian Hook, congratulated Mollaei for his achievement and for “personifying the true camaraderie between the people of Iran and Israel.”

Israeli Athletes Barred From Competing Under Their Own Flag at UAE Judo Event (Oct. 27, 2017)