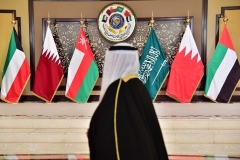 The flags of the six Gulf Cooperation Council countries on display at a previous GCC summit, in Kuwait City. (Photo by Giuseppe Cacace/AFP via Getty Images)

(CNSNews.com) –  Secretary of State Mike Pompeo on Sunday welcomed a call by the six Arab Gulf states for the soon-to-expire U.N. arms embargo on Iran to be renewed, days before the U.S. pushes for a U.N. Security Council vote to achieve that goal.

China has already indicated that it opposes the move – and as a permanent UNSC member it enjoys veto power – but the support of the six members of Gulf Cooperation Council (GCC) strengthens the U.S. case that the Iranian regime is a security threat.

In a joint letter to the U.N., the governments of Saudi Arabia, the United Arab Emirates, Kuwait, Qatar, Oman, and Bahrain urged the Security Council to extend the embargo, now due to expire on October 18.

“It is inappropriate to lift restrictions on the supply of weapons from and to Iran until Iran gives up its destabilizing activities in the region and stops supplying terrorist and sectarian organizations with weapons,” the GCC said.

“The U.S. will introduce a resolution this week to extend the embargo after years of diplomacy,” he tweeted. “The Council must choose between arming terrorists or standing by the Gulf.”

It was significant that Qatar joined its GCC partners in making the call. Qatar has been embroiled in a serious rift with some of its neighbors for three years over its support for the Iranian regime, and for terrorist and radical groups including Hamas and the Muslim Brotherhood.

(Saudi Arabia, UAE, Bahrain, and Egypt imposed a blockade against Qatar, which was in turn supported by Turkish President Recep Tayyip Erdogan, himself a strong backer of Hamas and the Muslim Brotherhood, backed Qatar in the spat.)

The embargo’s five-year lifespan is one of the outcomes of Obama-era nuclear agreement, the Joint Comprehensive Plan of Action (JCPOA), which was enshrined in a 2015 UNSC resolution, 2231. President Trump withdrew from the JCPOA in May 2018.

Although the U.S. plans to introduce a resolution this week extending the embargo, chances of passage look slim, given China’s opposition.

“We don’t agree with the U.S. in pushing for the extension of the arms embargo against Iran in the Security Council,” foreign ministry spokesman Wang Wenbin told a briefing in Beijing on Thursday. “All the provisions of resolution 2231, including the relevant arrangements with regard to arms embargo, should be implemented in earnest.”

China is in the front of the line of prospective suppliers of new weaponry to Iran once the embargo is gone. Beijing and Tehran are reportedly close to finalizing a $400 billion, 25-year agreement on enhanced defense cooperation.

Russia, also a major arms supplier and Iran ally, has for months been advising the U.S. not to waste its time trying to extend the embargo.

“It is ridiculous that the country which has violated the resolution [by withdrawing from the JCPOA] is now proposing to extend its provisions, while at the same time trying to prevent other countries from honoring it,” Russia’s foreign ministry said last March.

Last week, Pompeo tweeted, “Iran remains the world’s largest state sponsor of terror, and for the Iranian regime to have access to weapons systems, money, and commerce from the Chinese Communist Party only compounds risk for the region.”

That drew an acerbic response from Russia’s number two diplomat at the U.N. in New York, Dmitry Polyanskiy.

“You need to add, Mr. Secretary of State, that U.S. remains world’s largest state sponsor of instability, unpredictability and chaos,” he tweeted. “And such a behavior compels every state to think how to protect itself. Like a chain reaction with U.S. as an engine – stop it, let the world breathe!”

To secure passage in New York, the U.S. would need the support of at least nine of the 15 UNSC members. In addition, all five permanent members would have to vote in favor or abstain.

Pompeo has warned that in event of failure, the U.S. still has the ability to invoke so-called “snap back” sanctions under the JCPOA, which would restore all U.N. sanctions on Iran that had been lifted – effectively extending the arms embargo, among other measures.

Critics of the U.S. decision to withdraw, most notably Iran itself but also other JCPOA parties, contend that because the U.S. left the agreement it no longer has the right to push the “snap back” option.

But the State Department, in a legal opinion late last year, argued that the U.S. retains the right to do so, despite having withdrawn from the deal.