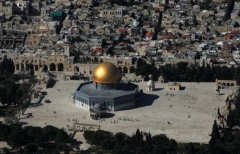 An aerial photo shows part of the Temple Mount/ Haram al-Sharif in Jerusalem, with the Dome of the Rock mosque in the center. The Al-Aqsa mosque is off camera, to the left. (Photo by Menahem Kahana/AFP via Getty Images)

(CNSNews.com) – A local Israeli court finding in favor of a Jewish Israeli who quietly prayed on Jerusalem’s Temple Mount has prompted a clamor among Arab and Islamic critics, who charge that the move will provoke the world’s Muslims.

Israeli police had barred Rabbi Aryeh Lipo from visiting the Temple Mount for 15 days for praying at the site – the most sacred location in Judaism – but the court lifted the ban early, on the grounds his quiet and private prayer was not sufficient to violate relevant police regulations.

“The appellant stood in the corner with a friend or two, there was no crowd around him, his prayer was quiet, whispered,” the Times of Israel quoted Judge Bilhah Yahalom as saying in her ruling, after she viewed a recording of the incident. “I have not found that the religious acts carried out by the appellant were externalized and visible.”

The Temple Mount, a 35-acre, open-air hilltop platform in Jerusalem’s Old City that was the location of the biblical Temples, is home to the al-Aqsa and Dome of the Rock mosques. Al-Aqsa is the third-holiest site in Islam.

Reaction from Arab and Islamic leaders was swift and angry, with claims that a Jew’s quiet, outdoor prayer amounted to desecration of the sacred Islamic site.

“Such illegal decisions constitute an unprecedented assault on the inalienable religious rights of the Islamic ummah [global community] and its heritage, a provocation to the feelings of Muslims all over the world, and a violation of freedom of worship and the sanctity of holy places,” said Al-Othaimeen, a Saudi whose organization represents 57 Muslim-majority nations and territories.

He went on to talk about violations of international law and U.N. resolutions, and said the OIC holds Israel “fully accountable for the consequences of these decisions, which would destabilize the region and ignite a religious conflict there.”

Turkey’s foreign ministry called on the international community to “strongly oppose this wrong, illegal and dangerous decision and all provocations against the Al-Aqsa mosque.”

“It is an alarming possibility to be taken into account that this decision will further embolden fanatic circles that attempt to erode the status quo at the Al-Aqsa mosque and will lead to new tensions,” it said in a statement.

The Egyptian and Jordanian foreign ministry both condemned the court ruling, with Egypt demanding that the Israeli government not implement the court ruling or change the status quo of the site, which Muslims call Haram al-Sharif (Noble Sanctuary).

Hamas, the U.S.-designated foreign terrorist organization that controls Gaza, called the court decision “a blatant aggression against the blessed Al-Aqsa mosque, and a clear declaration of a war that goes beyond political rights to an aggression against religion and sanctities.”

The Temple Mount has been under Israeli sovereignty since the 1967 Six Day War (prior to which it was occupied by Jordan for 19 years), but Israeli governments since then have ceded its administration to an Islamic trust.

The nearest point observant Jews are generally able to pray publicly is the Western Wall, the remnant of a retaining wall on the platform’s western flank. Some rabbinical authorities also forbid Jews to go onto the site, lest they accidentally step on the place where the “holy of holies” was once located.

Moshe Polsky, an attorney with an Israeli legal aid group that represented Lipo, welcomed the decision.

“It is inconceivable that Jews in the Temple Mount area should not be allowed to mumble and pray even silently when Muslims on the mountain are allowed to do everything – pray, demand, play football, and riot while the police do not prevent this – and Jews should feel like strangers in the holy place,” the Jerusalem Post quoted him as saying.

Also protesting the court decision, the Palestinian Authority’s chief shari’a judge, Mahmoud Habbash at a press conference in Ramallah called it “a dangerous decision, a new aggression against Al-Aqsa mosque, and a flagrant violation of international law.”

“This Israeli behavior could open the door wide to the outbreak of a dangerous and destructive religious war that will not stop at the borders of Palestine and the region,” the official P.A. news agency WAFA quoted Habbash as saying.

The Grand Mufti of Jerusalem, Mohammad Hussein, speaking at the same event, said any decision by an Israeli court relating to al-Aqsa was “rejected by every Muslim in this world and every free person who believes in respecting the beliefs of others.”

Habbash declared that al-Aqsa is “a purely Islamic place.”

Arab and Islamic leaders routinely conflate “al-Aqsa” with the entire Temple Mount/Haram al-Sharif compound. While it is the mosque itself that is deemed holy – based on the belief that Mohammed stopped there during his “night journey” from Mecca to heaven – they contend that the whole area is sacred and dispute any Jewish claim to heritage there.

As attested by historical, archeological, and biblical sources, the two ancient Jewish Temples stood at the site. The second of those Temples, which features prominently in the New Testament, was destroyed by the Romans in 70 AD, some 500 years before the birth of Mohammed.

The future status of Jerusalem remains one of the most sensitive issues in decades-long attempts to resolve the conflict between Israel and the Palestinians.