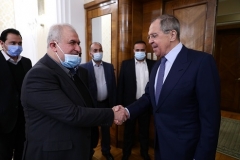 Asked during a teleconference briefing about Foreign Minister Sergei Lavrov’s meeting with the Hezbollah delegation, the department’s deputy spokesperson, Jalina Porter, offered a comment that made no mention of Hezbollah or Russia.

“Generally speaking, we’re concerned about the developments in Lebanon and the apparent inaction of the country’s leadership in the face of multiple ongoing crises,” Porter said. “Lebanon’s political leaders need to put aside their partisan brinkmanship and form a government that will quickly – quickly implement critical and long-needed reforms, restore investor confidence, and rescue the country’s economy.”

Lavrov on Monday welcomed a delegation led by senior Hezbollah leader Mohammed Raad for discussions on the situation in Lebanon and in neighboring Syria, where Russia, Hezbollah and Iran are deeply engaged in the 10-year-old civil war in support of the Assad regime.

Hezbollah operates both as a terrorist militia and a political party, holding seats in Lebanon’s parliament and positions in the cabinet. Raad heads Hezbollah’s “Loyalty to the Resistance” bloc in parliament.

No mild-mannered legislator, Raad is a leading Hezbollah ideologue who after Iranian Qods Force commander Qassem Soleimani was killed in a U.S. airstrike early last year, warned that revenge against the U.S., by the “axis of resistance” from Lebanon to Yemen, would be decisive.

Monday was not the first time the State Department under the Biden administration has parried questions relating to Hezbollah and its malign influence in Lebanon.

On February 5, spokesman Ned Price was asked whether the new administration in its dealings with Lebanon would prioritize “Hezbollah and its arms” – a reference to the fact the militia continues to hold and stockpile arms in violation of U.N. Security Council resolutions.

In response, Price pointed to a statement issued a day earlier by Secretary of State Antony Blinken and his French counterpart Jean-Yves Le Drian, marking the sixth-month anniversary of the massive explosion that destroyed Beirut’s port. But while that statement referred to Lebanon’s endemic political and economic crises, it said nothing about Hezbollah.

At a briefing three days later, Price again fielded a question alluding to Hezbollah’s failure to disarm – specifically, whether the U.S. backed calls from some political and religious leaders in Lebanon for an international conference to “put at end to the multiplicity of arms.”

Once again, Price pointed to the earlier Blinken-Le Drian statement – which was silent on Hezbollah – adding, “If we have any additional comment, we’ll be able to provide that.”

The contrast with the previous administration’s policy is striking. The Trump administration made a priority of applying pressure on Hezbollah and its Iranian patrons, launching a multi-country “counter-Hizballah international partnership” in 2019 to target the terrorist group’s global financial networks.

Between 2018 and 2020, the administration imposed sanctions on Hezbollah lawmakers – including Raad – financiers, financial network in the Middle East and Africa, “enablers,” companies, and high-ranking military officials.

During a visit to Lebanon two years ago, then-Secretary of State Mike Pompeo spoke out repeatedly against Hezbollah, even when standing alongside then-Foreign Minister Gebran Bassil, a Hezbollah ally. Last fall, the Trump administration imposed sanctions on Bassil for “corruption.”

In his last engagement with Le Drian last November, Pompeo “highlighted Hezbollah’s malign influence in Lebanon,” the department said at the time.

‘Moscow’s appreciation of the party’s role’

The Hezbollah delegation’s three-day visit will include meetings with lawmakers in Russia’s lower and upper houses.

Raad told Lebanon’s Al Manar TV network after meeting with Lavrov that Moscow was looking to Hezbollah to maintain stability in Lebanon and the region.

He said the invitation reflected “Moscow’s appreciation of the party’s role in defeating Israeli hostility and takfiri terrorism” – the latter a reference to Sunni insurgents in Syria.

According to the Russian foreign ministry, Lavrov at his meeting with the Hezbollah delegation, “reaffirmed Russia’s consistent line in support of the sovereignty, unity and territorial integrity of Lebanon. He emphasized the need to resolve acute issues on the national agenda on the basis of a broad dialogue with the participation of representatives of all leading confessional groups of Lebanese society, exclusively in the legal field and without foreign interference.”

Lebanon is in the throes of a drawn-out political crisis that shows little sign of resolution. After last summer’s huge blast in Beirut threw the already battered economy into freefall, Lebanon’s ceremonial president appointed Mustafa Adib as prime minister, but when he was unable to form a government – due in part to a disagreement over Hezbollah’s demands for cabinet posts – he stood down in favor of Saad Hariri, a two-term former prime minister.

Months later, Hariri too has been unable to cobble together a government. With the national currency collapsing, fresh demonstrations erupted last week, with citizens protesting the state’s inability to tackle the economic and political crises.

The Lebanese state’s failure to disarm Hezbollah violates U.N. Security Council resolution 1559 of 2004, which calls for “the disbanding and disarmament of all Lebanese and non-Lebanese militias”; and resolution 1701 of 2006, which calls for “the disarmament of all armed groups in Lebanon, so that … there will be no weapons or authority in Lebanon other than that of the Lebanese state.”