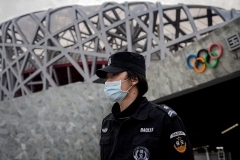 Update:  Asked on Thursday about the possibility of a diplomatic boycott of the Beijing Olympics, President Biden told reporters that it was “something we are considering.”

(CNSNews.com) – Amid growing indications that the administration is leaning towards a diplomatic boycott of the Beijing Winter Olympics over Chinese human rights abuses, President Biden himself threw no light on the matter when asked this week if a government delegation would be sent to the games.

“Sir, will there be a government delegation to the Olympics?” a reporter asked Biden as he prepared to fly back to Washington from New Hampshire on Tuesday night.

“I’m the delegation, and I dealt with it,” he replied.

It was not clear whether Biden properly heard or understood the question, but when White House deputy press secretary Chris Meagher was asked Wednesday if he could clarify what Biden intended to say, he replied, “The president was not providing an update in his answer last night, and that’s all I got for you on that one.”

A reporter then suggested that were Biden to hold a press conference after his Thursday summit with Canadian Prime Minister Justin Trudeau and Mexican President Andrés Manuel López Obrador – rather than a simple “pool spray” as scheduled – then questions like that could be asked and matters clarified.

“The most recent data point is yesterday, where you guys had to clean up not only this Olympic comment but his comment on the timing for the [announcement on the nominee to lead the] Fed and his Taiwan comment,” the reporter remarked.

“Is the worry that you don’t want the president taking questions? And if not, I think the best way to satisfy that would be to have the president out there tomorrow.”

Both the U.S. and Chinese governments said the Beijing games did not come up during the three-and-a-half hour virtual meeting between Biden and Chinese President Xi Jinping on Monday night.

The following day, Washington Post columnist Josh Rogin was first to report that the United States would not have a diplomatic presence at the games, which open on February 4.

Citing administration sources, Rogin said “a formal recommendation has been made to the president and he is expected to approve it before the end of the month.”

Unnamed sources have since confirmed to Reuters, CNN and other media outlets that a diplomatic boycott is under consideration.

Calls to boycott the games either diplomatically or totally – that is, with athletes staying away as well – have mounted through the year, with those advocating the stance pointing to Beijing’s widely-condemned abuses in Xinjiang, Tibet and Hong Kong.

Boycott supporters include members of Congress from both sides of the aisle, lawmakers from the European Union and other Western democracies, and hundreds of human rights advocacy groups.

Biden administration officials since last February have responded to queries by saying repeatedly that the U.S. is consulting with “partners and allies” on the matter.

In the U.S. Congress, lawmakers introduced half a dozen resolutions this year, calling on the U.S. to lead a boycott, targeting corporate sponsors, or urging the International Olympic Committee (IOC) to move the games to “a country that recognizes and respects human rights.”

“Dictators love the Olympics,” the sponsor of one such resolution, Rep. Mike Waltz (R-Fla.), told Fox Business on Wednesday.

“And our preference was that the IOC, the International Olympic Committee, move the games,” he said. “But since they’ve refused despite repeated requests for years now, I think at this point, we put a full boycott in place.”

Waltz recalled the boycott of Pretoria during the apartheid era. (South African athletes did not take part in the Olympic Games from 1964 to 1988.)

“I would tell you the massive and grotesque human rights abuses that are going on [in China] are disgusting,” he said. “COVID unleashed on the world, stamping out freedom on Hong Kong – how can we wave the American flag there?”

China’s capital is the first city to be selected by the IOC to host both the summer and winter games. When it hosted the Summer Games in 2008, human rights groups accused the IOC of wasting the opportunity to use its influence to press the Chinese Communist Party (CCP) to make reforms.

U.S. Commission on International Religious Freedom (USCIRF) vice chair Nury Turkel reiterated on Wednesday that the commission has long been calling for a U.S. diplomatic boycott of the games.

“Attending the Beijing Olympics could be seen as endorsing the CCP and its horrific religious freedom and human rights abuses of Uyghurs, Tibetans, Hong Kongers, and many others,” he tweeted.

“As such, the United States and like-minded international partners should NOT send official delegations to the Beijing Olympics unless the CCP discontinues its religious freedom violations, especially its genocidal campaign against Uyghurs,” said Turkel, himself a Uyghur American.

When Will Biden Make a Decision on Beijing Olympics? Blinken: Sometime Before They Start (Nov. 12, 2021)

Blinken: We’ll Hear What Other Countries Are Thinking Before Deciding on Beijing Olympics Boycott (Mar. 18, 2021)