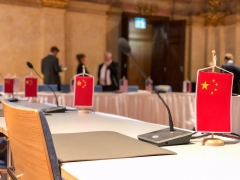 (CNSNews.com) – The head of the U.S. delegation to nuclear arms control talks with the Russians in Vienna this week reproached China for not turning up, and said he plans to share with NATO on Wednesday information about Beijing’s “crash nuclear build-up.”

U.S. and Russian negotiators began talks in the Austrian capital on Monday, exploring the possibility of extending the New START nonproliferation treaty beyond it expiry date next February. The Trump administration wants it expanded into a three-way agreement, to include China.

China, whose growing nuclear arsenal is not covered by the 2010 treaty, has displayed no interest in seeing that change, and was never expected to turn up for the talks.

Still, U.S. presidential envoy for arms control, Marshall Billingslea, said earlier this month there would be a seat waiting for China in Vienna.

On Monday, he made a point of highlighting its absence, posting on Twitter a photo showing empty places at the negotiating table adorned with small Chinese flags.

“Vienna talks about to start. China is a no-show,” he tweeted above the image. “Beijing still hiding behind #GreatWallofSecrecy on its crash nuclear build-up, and so many other things. We will proceed with #Russia, notwithstanding.”

The talks then got underway, with Billingslea and Russian deputy foreign minister Sergei Ryabkov leading their respective delegations in sessions that stretched late into Monday night.

In a fresh tweet on Tuesday, Billingslea again swiped China for not taking part.

U.S. envoy for arms control, Marshall Billingslea speaks at a briefing in Vienna on Tuesday after U.S.-Russia talks on the New START Treaty. (Photo by Joe Klamar/AFP via Getty Images)

“Why is China avoiding talks? What is it trying to hide?” he asked. “Tomorrow we will provide more information to @NATO on China’s crash nuclear build-up.”

Beijing was not amused by Billingslea’s earlier “no-show” tweet and the photo of the empty seats.

“China has on many occasions stated its position on opposing trilateral negotiations of arms control,” foreign ministry spokesman Zhao Lijian told a briefing. “It is unserious, unprofessional and unappealing for the U.S. to try getting people’s eyes in this way.”

“We urge the U.S. to stop playing such dull tricks,” he added.

There was similar criticism from Moscow, which has long rejected what its foreign ministry calls “the entirely contrived issue of pulling China into bilateral Russian-U.S. mechanisms.”

Konstantin Kosachev, chairman of the Federation Council’s foreign affairs committee, said of the symbolic empty China seats, “This is not the way serious negotiators behave.”

“They needed to put on some kind of show to demonstrate that the Chinese presence at the talks is desired, to say that they had been invited, but declined to attend the talks,” Kosachev, a close ally of President Vladimir Putin, told Izvestia.

“However, this looks more like an ultimatum, and no self-respecting country can react positively to such an invitation.”

Time is running out for the treaty, set to expire in February unless replaced by a new document – or unless extended by a maximum of five years, to 2026, by mutual consent of both governments.

The Trump administration, which withdrew last year from the 1987 Intermediate-Range Nuclear Forces (INF) treaty, and last month signaled plans to exit the Open Skies Treaty – in both cases alleging Russian violations – has not committed to extending New START.

Billingslea told reporters in Vienna on Tuesday that during Monday’s marathon talks both sides agreed the strategic environment had changed significantly in the decade since New START was signed.

“We can all remember back ten years ago. The world is, in fact, a radically different place.”

Billingslea said any new agreement must include all nuclear weapons – not just strategic ones covered in the soon-to-expire treaty – and must also include China in a trilateral arrangement.

(Russia has been developing new nuclear weapons not covered by the treaty, including a nuclear-capable cruise missile boasting “unlimited range” and a nuclear-powered and nuclear-armed unmanned underwater vehicle.)

Ryabkov in a Russian television interview last month predicted that the Trump administration intends to allow New START to expire, and accused it of “using Russia in order to draw China into these talks.”

While concerned at the prospect of another key arms-control treaty collapsing, some European NATO allies are voicing support for China joining the talks, with the foreign ministries of Norway, Poland, Latvia, Lithuania, Estonia and the Netherlands all doing so again in recent days.

Last week Rep. Liz Cheney (R-Wyo.) and 40 Republican colleagues in a letter to President Trump supported the effort to bring China to the arms control table.

They recalled a warning from Defense Intelligence Agency director Lt. Gen. Robert Ashley last May that China is “implementing the most rapid expansion and diversification of its nuclear arsenal” in its history, and that it will likely at least double the size of its stockpile over the next decade.

“As the Chinese regime continues to engage in pernicious behavior in the Indo-Pacific and around the world, we reiterate our support for your efforts to protect freedom and stability through meaningful arms control,” the lawmakers wrote.