With Beijing Olympics 15 Weeks Away, Still No US Decision on Calls to Boycott 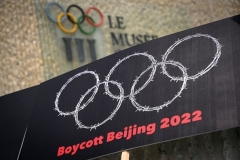 Tibetan and Uyghur activists hang a protest sign outside the Olympics Museum in Lausanne, Switzerland in June. (Photo by Fabrice Coffrini/AFP via Getty Images)

(CNSNews.com) – The opening of the Beijing Winter Olympics is now just 15 weeks away, but as the Olympic flame was handed over to the Chinese organizers at a ceremony in Greece on Tuesday there was still no indication from the Biden administration on whether it will support a full or diplomatic boycott of the games.

Administration officials have spoken repeatedly since February about consulations with “partners and allies” over the Beijing games. Asked whether the State Department could provide any update on those consulations a spokesperson on Wednesday referred queries “regarding U.S. participation” to the U.S. Olympic and Paralympic Committee.

The ritual handover of the torch to the Beijing 2022 organizing committee took place in the Athens arena that hosted the first modern Olympics in 1896, and it came a day after the flame was lit in Ancient Olympia.

Alluding perhaps to calls for the International Olympic Committee to take a firmer stand on human rights in countries selected to host the games, IOC president Thomas Bach said at the flame-lighting ceremony that “the Olympic Games cannot address all the challenges in our world.”

“But the Olympic Games set an example for a world where everyone respects the same rules and one another,” he said. “They inspire us to solve problems in friendship and solidarity.”

Bach said the games must “stand above any political conflict” and “be respected as politically-neutral ground.”

Police rushed to intervene when protestors waved a Tibetan flag and a banner bearing the words “No Genocide Games.” Five activists were detained, as were two others who displayed a “Free Hong Kong” banner at the Acropolis a day earlier.

Greek police intercept protestors holding a Tibetan flag and a "No Genocide Games" banner during a flame-lighting ceremony for the Beijing 2022 Winter Olympics at the Ancient Olympia archeological site on Monday. (Photo by Aris Messinis/AFP via Getty Images)

She said the IOC at the ceremony invoked “the ideals of the Olympic truce of peace, unity and humanity, when the reality is that once again they’re handing over the Olympic torch to a host government that is so far removed from upholding any of these ideals. It seems we’re living in a kind of warped reality.”

Human rights advocacy groups across the world have appealed for a stayaway from the games, citing mass-scale human rights abuses against minority Muslims in Xinjiang, and Beijing’s stifling of democracy in Hong Kong.

Calls for various levels of boycott are also coming from lawmakers in more than a dozen Western nations.

Britain’s House of Commons in July voted unanimously for a diplomatic boycott unless Beijing ends the “atrocities” taking place against minority Uyghurs and others in Xinjiang.

Earlier that same month, the European Parliament voted 578-29 for diplomats and officials from the bloc’s 27 member-states to decline invitations to attend the Olympics, “unless the Chinese government demonstrates a verifiable improvement in the human rights situation in Hong Kong, the Xinjiang Uyghur region, Tibet, Inner Mongolia and elsewhere in China.”

On Capitol Hill, half a dozen resolutions have been introduced this year calling variously on the IOC to move the games to “a country that recognizes and respects human rights,” or expressing the sense of Congress that the U.S. should lead an international boycott if Beijing remains the host city.

“Beijing has also historically used the Olympics as an opportunity to expand domestic surveillance, repression, and control. Participation in the Beijing Games does not only make the U.S. complicit and signal a lack of competitive will. It also means idly standing by in a way that forfeits a strategic opportunity to convey values-based leadership in the face of CCP atrocities.”

For the past nine months, State Department officials have responded to questions about the games by saying repeatedly that the administration was consulting with other governments on reaching a “shared” or “common” approach to the question of participation.

In some cases, they have argued that the Olympics were still some time away, implying that there was no hurry to reach a decision.

The countdown to the February 4 opening ceremony will move into double digits next week.

Some administration officials’ responses this year to questions on Beijing 2022 appear below:

Feb. 3:  White House press secretary Jen Psaki: “We’re not currently talking about changing our posture or our plans as it relates to the Beijing Olympics. We consult, of course, closely with allies and partners at all levels to define our common concerns and establish a shared approach.  But this is – there’s no discussion underway of a change in our plans from the United States at this point in time.”

Feb. 11: State Department spokesman Ned Price: “We are consulting closely with our allies and our partners at all levels to define our common concerns and to establish our shared approach to China. I wouldn’t want to get ahead of things. We are in early 2021. We will have plenty of time to talk about 2022 as – in the ensuing months.”

Mar. 16: State Department deputy spokeswoman Jalina Porter: “The Olympics are in 2022, and that’s – we’ll deal with that when that comes up, but right now that hasn’t been at the forefront of our conversations.”

Apr. 6: Price: “It is something that we certainly wish to discuss and that it is certainly something that we understand that a coordinated approach will be not only in our interests but also in the interests of our allies and partners. So this is one of the issues that is on the agenda both now and going forward, and when we have something to announce, we will be sure to do that.”

May 3: Blinken: “We’re still a ways away from the Beijing Olympics, something that we’ll look at in the months ahead.  We’ll certainly talk to other countries, to allies and partners, to get their perspective, but that’s not something we’ve focused on yet.”

May 21: Psaki, asked if President Biden agreed with House Speaker Nancy Pelosi’s call for a boycott, said the administration was “quite outspoken on human rights” in its engagement with the Chinese, “but our position on the Beijing Olympics has not changed.”

Jul 13: Price, asked if the U.S. would consider following the example of the European Parliament which voted for a diplomatic boycott of the games, “We are closely consulting with allies and partners, as well as other actors, including the business community, to identify common concerns and, ideally, to establish a common approach regarding the 2022 Winter Olympics.”

Aug. 10: Price: “It is still mid-2021 – August is still mid, I suppose – so we are not – don’t want to wade in just yet on 2022 Olympics. We are, as we have said, consulting closely with our allies and partners to, in the first instance, define those common concerns and to establish a shared approach. But again, I don’t want to get ahead of where we are, given that we still have some time to go.”