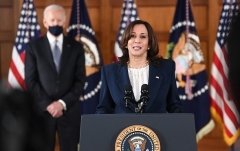 (CNSNews.com) – Vice President Kamala Harris’ recent words about racism in America received a fresh airing at a press conference at the Chinese foreign ministry on Monday, with a ministry spokeswoman declaring that Harris “was telling the truth about the United States.”

The reporter also pointed to another comment by Harris at Emory – an apparent dig at former President Trump: “For the last year, we’ve had people in positions of incredible power scapegoa – scapegoating Asian Americans,” she said. “People with the biggest pulpits spreading this kind of hate.”

Harris and President Biden were visiting Georgia to meet with Asian-American leaders to discuss threats against the community, three days after a white man shot dead eight people – six of them Asian women – at three massage parlors in the state. The 21-year-old suspect told police he was motivated by a sex addiction, not racial hatred.

Invited to comment on Harris’ remarks, foreign ministry spokeswoman Hua Chunying began by saying China was saddened to hear that a Chinese citizen was among the victims of the shooting, and urged the U.S. “to punish the perpetrator according to law at an early date and do justice to those killed and their beloved ones.”

“In the meantime, the U.S. should take concrete measures to protect the safety and legitimate rights and interests of Chinese citizens in the U.S.,” she added.

“Vice President Harris was telling the truth about the United States,” Hua continued. “In recent years, hate crimes and racism against Asians have been on the rise in the United States, and many tragedies have taken place.”

“It’s been 58 years since Dr Martin Luther King Jr. delivered his iconic ‘I Have a Dream’ speech, however, George Floyd still ‘can’t breathe,’” she said, referring to the 46-year-old African American man who died after a white policeman knelt on his neck during an arrest in a Minneapolis city street last May.

Turning to the coronavirus pandemic, Hua accused the Trump administration of having “spread false information and racist remarks, leading to systematic racial discrimination and hate crimes against Asian-Americans.”

Trump drew widespread criticism for using terms like the “China virus” or “Wuhan virus” for the respiratory pathogen that first emerged in Wuhan, China, in late 2019 before spreading across the globe, killing more than 2.7 million people to date.

At the briefing in Beijing, the reporter for the CCP mouthpiece also cited a statement issued by Biden on Sunday, marking the International Day for the Elimination of Racial Discrimination.

In that statement, Biden said that Americans “acknowledge that systemic racism and white supremacy are ugly poisons that have long plagued the United States.”

“We will not shy away from engaging in the hard work to take on the damaging legacy of slavery and our treatment of Native Americans, or from doing the daily work of addressing systemic racism and violence against Black, Native, Latino, Asian American and Pacific Islander, and other communities of color,” the statement said. “Neither will we fail to speak out against the horrific mistreatment of the Rohingya in Burma, the Uyghurs in China, or any racial discrimination we see in the world.”

In her response, Hua said China hoped the U.S. would “match its words with deeds, and take concrete actions to truly protect the legitimate rights and interests of ethnic minorities, including the Asian community, and prevent them from being discriminated, attacked, hated or even killed.”

However, Biden’s reference in the statement to Uyghurs, the Muslim minority living in China’s Xinjiang region, brought a sharp rebuke from Beijing’s spokeswoman.

“Xinjiang-related issues are not about the treatment of the Uyghurs, but about lies and truth,” Hua said. “It’s nothing short of absurdity that the U.S. side bases its accusations against China on lies and rumors. If the U.S. government could truly care and safeguard the lawful rights of ethnic minorities as China does with the Uyghur and other ethnic groups in Xinjiang, the problem of racial discrimination in the US would have been solved long ago.”

The U.S. and Canada have determined that the Chinese state’s abuses in Xinjiang amount to genocide. The U.S. and European Union on Monday announced new sanctions against officials there for “serious human rights abuses against ethnic minorities.”

China denies the claims of atrocities, describing its mass incarceration of Muslims in Xinjiang as an education and vocational program targeting Islamic radicals.

Since the shootings in Georgia last Tuesday, China has stepped up its accusations of racism in America, in some cases – like at the U.N. General Assembly on Friday – while defending itself against accusations of atrocities in Xinjiang.

In an editorial on Sunday, China Daily – also a CCP organ – said the United States, “the self-claimed champion of human rights, is, in fact, a dungeon of hate crimes and racial discrimination.”

“Before accusing others of abusing human rights, it should get its own house in order,” it said.