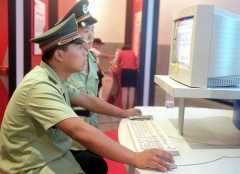 (CNSNews.com) – Chinese Communist Party’s censors appear to have blocked access in China to CNSNews.com, at a time when the website’s audience numbers in the country evidently have been increasing.

A system monitoring Chinese censorship detected the blockage at around noon U.S. eastern time on April 26 (just after midnight on April 27 Beijing time).

Google Analytics audience data show that the number of daily CNSNews.com users in China, which averaged 467 over the period April 10-25, dropped from that average by 79.2 percent on April 26, and by a further 94.8 percent on April 27.

Although modest, readership appears to have been growing in China. Compared to 56,615 users in all of 2020, the first four months of this year alone (through April 28) have already seen 44,143 users recorded.

CNSNews.com has reported on China for many years, but more extensively since early 2020. China’s handling of the coronavirus pandemic, religious freedom abuses, trade and labor-related disputes, the crackdown in Hong Kong, the Taiwan question, and mass violations of human rights in Xinjiang have been among the issues covered.

(To see a list of--and links to-- some of CNSNews.com's recent reports and commentaries on China click here.)

The CCP oversees a vast network of online censorship and control, dubbed the “Great Firewall.” Only through the use of virtual private networks (VPNs) that circumvent firewalls can users access many sites, including popular social media platforms like Twitter and YouTube.

The blockage of the CNSNews.com domain was first detected by researchers at Citizen Lab, a project focused on Internet censorship and human rights at the Munk School of Global Affairs and Public Policy at the University of Toronto.

Several online tools that enable a user to check if a website is blocked in China, including vpnmentor.com and AppInChina Inc., indicate that CNSNews.com cannot be accessed inside the country.

The AppInChina tools finds the URL unreachable in the four major centers it monitors – Beijing, Shanghai, Shenzhen in the south, and Chengdu in central China.

Comparitech, a tech research consumer website, finds that CNSNews.com cannot be accessed in Beijing and Shenzhen, as well as in Heilongjiang and Yunnan provinces, and the Inner Mongolia autonomous region.

Among a selection of mainstream, liberal, and conservative sites, those evidently blocked in China as of Friday include BBC News, the Washington Post, New York Times, The Guardian, USA Today, NBC News, MSNBC, Free Beacon, National Review, and Daily Mail.

AppInChina Inc., a Beijing-based marketing firm that helps foreign apps distribute in China, says although there is no official published list of sites and services blocked in China, “Internet traffic can be blocked based on DNS, IP address, URL keywords, and actual site content. Some of this is maintained in blacklists, while real-time content monitoring is also employed, both automated and manual.”

According to Comparitech, a tech research consumer website, an estimated 10,000 domains in China are believed to be blocked at any one time, although the number changes regularly.

“Websites are censored in China at the behest of the government and the ruling Communist Party,” it says. “Any websites or apps that undermine party rule, or have the potential to, are typically blocked. This consists largely of western news media, social networks, and sites built on user-generated content. Other content deemed vulgar, pornographic, paranormal, obscene, or violent is also blocked. Some western websites, apps, and services are blocked in order to prevent competition with domestic, homegrown alternatives.”

Comparitech ranks China second worst in the world (after North Korea) when it comes to Internet censorship, and in Reporters Without Frontiers press freedom index for 2021, China is in 177th place out of 180 countries assessed.

Not only are websites heavily restricted in China, journalists face severe prison sentences if they publish material the government finds objectionable, and members of the public can be jailed simply for sharing of commenting on certain news posts. (In 2018 the government announced new bans on unauthorized VPNs in a bid to stop users from bypassing firewalls.)

The government also relies on citizens to report offensive material, providing phone and email hotlines to facilitate the process.

A guide issued by the Office of the Central Cyberspace Affairs Commission’s “Illegal and Bad Information Reporting Center” urges citizens to report online material that endangers national security, honor and interests; incites subversion of state power and the overthrow of the socialist system; incites division and undermines national unity; promotes terrorism and extremism; and promotes ethnic hatred, among other things.