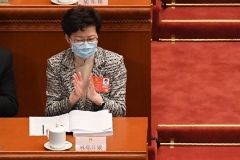 (CNSNews.com) – Less than a year after a proposal to allow extradition to mainland China sparked massive protests in Hong Kong, Beijing is planning a new national security law for the territory expected to be even more contentious, and worsen an already deeply troubled relationship with the United States.

Even before the draft legislation was submitted on Friday for China’s rubber-stamp legislature to review, the Trump administration and lawmakers from both parties warned that the U.S. will not take the move lightly.

The draft, introduced in the National People’s Congress by NPC Standing Committee chairman Wang Chen, said that more than 20 years after the former British colony reverted to Chinese rule, efforts to enact security laws there have been sabotaged by troublemakers within and “external hostile forces.”

That’s a likely reference to the United States, which Chinese officials last year sought to blame for months of street protests, sometimes violent, against the extradition bill.

Wang’s document said forceful measures were needed to prevent, stop, and punish activities that have harmed the rule of law in Hong Kong and threatened national sovereignty.

The bill aims to establish a legal framework and “enforcement mechanisms” to safeguard national security.

The draft says the new law, which includes “enforcement mechanisms,” is needed to strengthen the “one country, two systems” principle. But critics see it as threatening to do precisely the opposite.

“One country, two systems” is the formula under which Hong Kong returned to communist Chinese rule in 1997: Beijing promised it would enjoy limited autonomy under a capitalist system for at least 50 years.

Instead, Hong Kong has witnessed a slow erosion of its freedoms, met by strong resistance from an active pro-democracy movement. 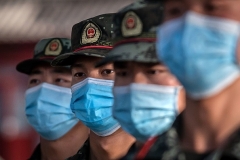 Article 23 of Hong Kong’s mini constitution, the Basic Law, states that the territory must enact its own national security law, to prohibit treason, secession, sedition, subversion against the central government, and other activities.

In 2003, attempts to implement Article 23 saw an estimated half a million people take to the streets in protest, prompting the territory’s Beijing-backed government to postpone and then scrap the plans.

The new legislation introduced on Friday seeks to revive them.

President Trump told reporters at the White House on Thursday that while no-one yet knows the details of the Chinese plan, “if it happens, we’ll address that issue very strongly.”

Sen. Marco Rubio (R-Fla.), whose Hong Kong Human Rights and Democracy Act passed last year with near-unanimous support, noted that it contains “powerful tools” and said the U.S. government should use them to hold China accountable.

The legislation, signed into law last November, requires the secretary of state to certify to Congress annually whether Hong Kong is “sufficiently autonomous” to merit special U.S. trading privileges.

That’s significant, because under 1992 legislation, the president is authorized to suspend the favorable U.S. trading terms enjoyed by the territory if it’s determined that Hong Kong is not “sufficiently autonomous” from the mainland.

Pompeo said earlier this month he was delaying certification, pending the NPC session – which began on Friday, after a two-month postponement due to the coronavirus pandemic.

He repeated that on Wednesday, telling reporters, “we’re closely watching what’s going on there.”

In response to a question Thursday about the remarks, Chinese foreign ministry spokesman Zhao Lijian said Pompeo should “figure out the territorial scope of the U.S. and stop poking his nose into China’s internal affairs, otherwise his attempts will be countered.”

The CCP-affiliated Global Times in an editorial Friday called the proposed new law “a move aimed at preventing external forces from meddling in HK affairs” and at deterring “extremists” in Hong Kong.

During 2009, it said, Hong Kong had been “like a city in an undeveloped country engulfed in turmoil.”