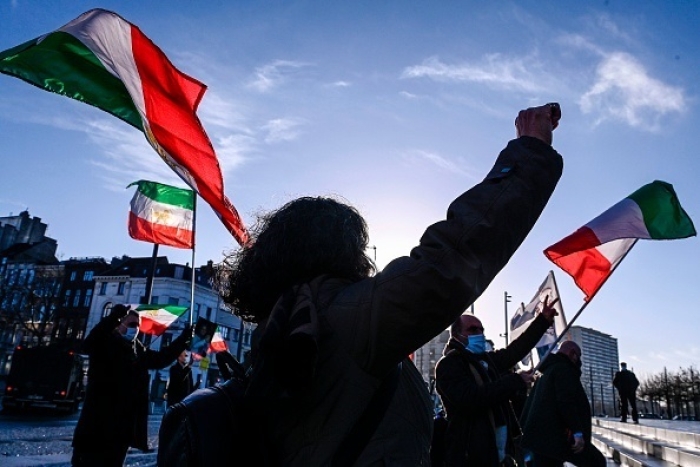 Iranian dissidents protest outside the courthouse in Antwerp, Belgium, in Februry 2021, on the day the court sentenced Iranian diplomat Assadollah Assadi to 20 years’ imprisonment. (Photo by Dirk Waem/ Belga /AFP via Getty Images)

(CNSNews.com) – The government of Belgium is seeking passage of a bill that could allow an Iranian diplomat serving a lengthy prison sentence for terrorism to be return home, fulfilling a long-standing demand by the regime in Tehran.

The government is characterizing the move – which would allow criminals convicted of offenses in Belgium or Iran to serve their sentences in their home countries – as a humanitarian gesture.

But the most obvious direct beneficiary of the arrangement would be Assadollah Assadi, the Iranian diplomat sentenced early last year to 20 years’ imprisonment, after being convicted for his role in a plot to bomb a prominent gathering of Iranian dissidents near Paris in 2018.

The plan is sparking outrage from opposition legislators in Belgium, and some U.S. and British lawmakers are also calling for the country’s parliament to reject it.

The target of the plot was the National Council of Resistance of Iran (NCRI), an exiled group reviled by the regime, which boasts some high-profile supporters in the U.S. and Europe.

Assadi, who was based at Iran’s embassy in Vienna, abused diplomatic privilege to smuggle the powerful explosive TATP from Iran to Europe, where he delivered it to Belgium-based accomplices.

The plan to attack the NCRI rally, which was attended by tens of thousands of people, was foiled after police intercepted a Belgian couple en route to Paris, and found in their car 500 grams of TATP and an ignition mechanism. Assadi was arrested in Germany and extradited to Belgium. A fourth suspect was arrested in France.

The four were put on trial in Belgium, where the court found that they were “part of a larger terrorist group within a specific Iranian intelligence service.” All were convicted, with Assadi’s co-accused sentenced to 17-18 years’ imprisonment.

Throughout the affair the Iranian regime hotly rejected the accusations against its diplomat and demanded his return.

The regime has a long history of using imprisoned foreigners to secure concessions from their governments. It has been accused of trying to use Europeans in Iranian prisons – including Iranian-Swedish physician Ahmadreza Djalali, on death row for “spying for Israel” – as leverage to obtain Assadi’s release. On Monday, Belgian media outlets reported that Iran is also holding a Belgian citizen. 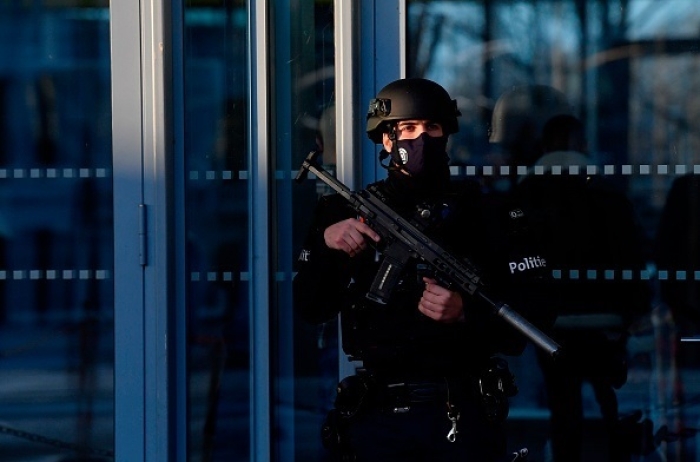 A Belgian police officer stands guard outside the courthouse in Antwerp, Belgium, in Februry 2021, on the day the court sentenced terror-convicted Iranian diplomat Assadollah Assadi to 20 years’ imprisonment. (Photo by John Thys/AFP via Getty Images)

The Belgian parliament’s foreign relations committee is scheduled Tuesday to debate a bill that would enshrine a recently-signed protocol with Iran (and two others, relating to agreements with India and the UAE) providing for the transfer of sentenced citizens.

N-VA leader Theo Francken said it was “unacceptable” to have an agreement with Iran that would enable convicted terrorists to be sent back to Iran – not to serve out their sentences but to receive amnesty and a hero’s welcome.

“Tomorrow I will join the protest against the extradition of terrorists to the rogue state of Iran,” he tweeted on Monday.

“The approval of the government's bill on prisoner exchanges with Iran will make Belgium a dream country for terrorists, sent by the Iranian regime, who want to carry out attacks on European soil,” said Darya Safai, an N-VA lawmaker who is also an expatriate Iranian.

Recalling that several prominent Americans were at the targeted rally, another N-VA lawmaker, Michael Freilich, said one way to “stop this travesty” would be for the U.S. Justice Department to apply for Assadi’s extradition to the U.S.

U.S. Rep. Randy Weber (R-Texas) said he was “shocked” to learn Belgium had reached an agreement with “the world’s largest sponsor of terrorism,” that it was now trying to get parliament to ratify.

He urged Belgian lawmakers in a video message to “reject any language in the bill that would allow terrorists to go back to their terrorist nests.”

Weber recalled that the House of Representatives had taken the bomb plot seriously.

Just days after the Belgian trial ended, more than 250 lawmakers co-sponsored a bipartisan resolution condemning Iranian state-sponsored terror attacks against U.S. citizens and Iranian dissidents, and calling for Iranian embassies to be closed to prevent them from being used for malign activities.

Weber, together with Reps. Louie Gohmert (R-Texas) and Brian Fitzpatrick (R-Pa.), wrote at the weekend to Belgian Prime Minister Alexander De Croo, urging him to reconsider.

The praised the Belgian government both for “preventing a heinous tragedy” and ensuring the perpetrators were held accountable, calling its actions “a testament to the rule of law and a commitment to ridding the world of the scourge of terrorism.”

“Therefore, we implore you to uphold these precious principles and reject any cynical ploy by Iran’s current ‘diplomats’ to trade terrorists for dubiously detained Belgians.”

Members of the British Parliament’s Committee for Iran Freedom called on the government in Brussels to withdraw the bill, saying that “releasing Assadi under any pretext will be a major blow to the efforts to combat and counter Iran’s state terrorism on European soil and undermine the counterterrorism cooperation which led to Assadi’s arrest and conviction.”

The NCRI called the initiative “shameful,” charging that Assadi had been assigned by the intelligence ministry to carry out a plot approved by supreme leader Ayatollah Ali Khamenei and the regime’s top leadership.

NCRI leader Maryam Rajavi said that if the bombing had been carried out successfully, “it would have been the biggest terrorist incident in Europe.”

“Today, if this legislation is approved, no one in Europe will have security and immunity from the murderers ruling Iran,” she said.