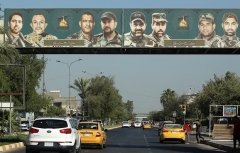 (CNSNews.com) – Facing its first deadly rocket attack targeting Americans in Iraq, the Biden White House said Tuesday it was engaging with Iraqi counterparts amid efforts to determine responsibility and “reserves the right to respond in the time and the manner of our choosing” once attribution is ascertained – but also stressed the “diplomacy is a priority with this administration.”

And State Department spokesman Ned Price suggested that an uptick in rocket attacks was linked to the Trump administration’s policy of pressuring rather than talking to the Iranian regime.

“I think the sad reality is that these kinds of rocket attacks have been more commonplace in recent years,” he told a briefing.

“With the implementation of the so-called ‘maximum pressure’ strategy, a strategy that at the same time did not engage in – did not have accompanied – was not accompanied by diplomatic engagement of any sort with the Iranian government, we have seen this spiral of attacks in recent months and beyond.”

White House Press Secretary Jen Psaki said the president and administration “reserves the right to respond in the time and the manner of our choosing, but we’ll wait for the attribution to be concluded first before we take any additional steps or obviously have any additional announcements.”

She added, “I will convey to you that obviously diplomacy is a priority with this administration and something that is front and center to our engagement with our global partners around the world.”

The Iranian regime earlier in the day rejected Iraqi accusations linking it to Monday night’s rocket attack in Erbil in Iraqi Kurdistan, which killed a civilian contractor with the U.S.-led anti-ISIS coalition and injured several coalition personnel, including an American service member.

A coalition spokesman, U.S. Army Col. Wayne Marotto, confirmed that the civilian contractor was not an American national, without elaborating. He said about fourteen 107 mm rockets had been launched, with three of them impacting an airbase hosting U.S. troops. Eight civilian contractors and one U.S. service member had been injured.

The attack was claimed by a Shi’ite group calling itself Saraya Awliya al-Dam (“Guardians of Blood Brigade”). Little is known about the group, but experts say there's evidence that it's a front for the Iran-backed militia Kata’ib Hezbollah (KH). Iran rejected claims by Iraqi officials that it has links to Saraya Awliya al-Dam.

Iran’s sponsorship of Shi’ite militias in Iraq whose aim is to drive out U.S. forces has been a source of tension between the U.S. and Iran since long before President Trump withdrew from the nuclear deal in May 2018 and reimposed sanctions under what became known as the “maximum pressure” campaign.

KH has a history of deadly attacks on U.S. forces dating back to the Iraq War. (The Obama administration designated it as a foreign terrorist organization in 2009, accusing it of responsibility for numerous attacks against U.S., Iraqi and other targets since 2007.)

Still, rocket attacks by the militias did flare up again after the sanctions pressure increased, especially from May 2019.

The Trump administration said the aim of its maximum pressure campaign on Tehran (which mirrored a similar strategy against North Korea) was not to bring about regime change, but to bring about a change in the regime’s behavior.

Tensions deepened after a U.S. contractor was killed in rocket fire targeting a base near Kirkuk in late 2019. A weeks later, Trump ordered the drone strike that killed the Iranian general overseeing the militias, Qods Force commander Qassem Soleimani, as well as KH leader Abu Mahdi al Muhandis, near Baghdad airport.

Two months later, U.S. forces carried out airstrikes against KH targets following another rocket attack on an Iraqi base which killed two U.S. troops and a British soldier.

As diplomatic efforts got underway after the Erbil rocket attack, Secretary of State Antony Blinken spoke to the prime minister of the Kurdistan Regional Government, Masrour Barzani, and Iraqi Prime Minister Mustafa ­al-Kadhimi, while Defense Secretary Mark Esper was speaking with his Iraqi counterpart, “to offer assistance with the investigation and to help hold accountable those responsible for this attack,” Psaki said.

In New York, acting U.S. representative Richard Mills told a U.N. Security Council virtual meeting that challenges posed by “Iran-backed militias and Iran’s destabilizing activities in Iraq” must be addressed to create a conducive environment for elections scheduled for October, as the U.S. strives to “help Iraq assert its sovereignty in the face of enemies, at home and abroad.”