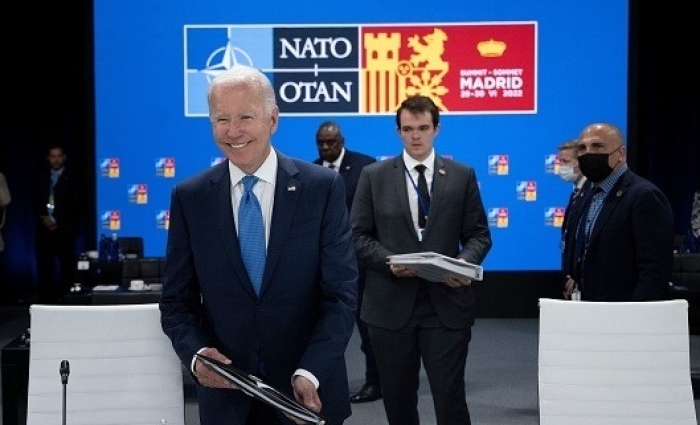 President Biden at the NATO summit in Madrid on Wednesday. (Photo by Brendan Smialowski / Pool / AFP via Getty Images)

(CNSNews.com) – The United States will “establish a permanent headquarters for the U.S. Army Fifth Corps” in Poland, President Biden said on Wednesday, as he laid out plans to boost the U.S. military presence in Europe in response to Russia’s invasion of Ukraine.

Biden’s announcement in Madrid was warmly welcomed by Poland, which has been calling for a permanent presence of NATO forces since 2014, when Russia annexed Crimea and began supporting armed separatists in eastern Ukraine.

“Something that for many seemed impossible came true today – we now have a permanent U.S. military presence in Poland,” tweeted Polish deputy foreign minister Marcin Przydacz. “This sends a clear signal to Moscow. We are committed to our joint security and we will continue to push for the strengthening of Poland’s defenses.”

Speaking alongside NATO Secretary-General Jens Stoltenberg at the NATO summit, Biden said the U.S. “will enhance our force posture in Europe and respond to the changed security environment, as well as strengthening our collective security.”

In addition to the Poland plan, he said the U.S. would increase the number of U.S. Navy destroyers based at a NATO naval facility in Rota, Spain, from four to six.

The Arleigh Burke-class destroyers are equipped with the Aegis missile defense system, capable of detecting, tracking and destroying ballistic missiles.

Further, Biden said the U.S. would have an additional rotational brigade stationed in Romania, enhance rotational troop deployments in the Baltic states, “and station additional air defense and other capabilities in Germany and in Italy.”

Biden said the U.S. had surged 20,000 forces to Europe earlier this year, taking the number of troops currently stationed in Europe to an estimated 100,000.

“We’re going to make sure that NATO is ready to meet threats from all directions, across every domain: land, air, and the sea,” he said.

“In a moment when Putin has shattered peace in Europe and attacked the very, very tenets of the rules-based order, the United States and our allies – we’re going to step up. We’re stepping up. We’re proving that NATO is more needed now than it ever has been and it’s as important as it has ever been.”

In response to Russia’s actions in Ukraine in 2014, NATO established four multinational “battlegroups” on NATO’s “eastern flank,” led by the U.S. in Poland, Britain in Estonia, Canada in Latvia, and Germany in Lithuania – on a rotational basis.

This year NATO agreed to double the number of battlegroups, and is setting up four more in Bulgaria (led by Bulgaria), Romania (led by France), Slovakia (led by Germany), and Hungary (led by Hungary).  The U.S. Army will also contribute one cavalry troop each to the new battlegroups in Hungary, Bulgaria, and Romania.

Poland and the Baltic states have been at the forefront of NATO’s response to Russia’s invasion of Ukraine, and among Kyiv’s most ardent backers. Poland has also taken in a record number of Ukrainians displaced by the war, almost 1.2 million.

In the 1997 NATO-Russia Founding Act, the alliance pledged that it would not pursue “additional permanent stationing of substantial combat forces” on the territory of countries that formerly fell within the Soviet sphere but were on track to join NATO (in 1999, 2004 and 2009).

However, that assurance was tied to “the current and foreseeable security environment,” and to a Russian undertaking to “exercise similar restraint in its conventional force deployments in Europe.”

NATO leaders have argued that the security environment has changed dramatically since 2014 – and especially, since last February.

Stoltenberg said earlier this year that as NATO looked to enhance its presence in along the eastern flank, “the NATO-Russia Founding Act is not something that will create problems or hindrance for NATO to make the necessary decisions.”

In a teleconference briefing on Wednesday, U.S. Assistant Secretary for Defense Celeste Wallander called the decision to permanently station the U.S. Army Fifth Corps headquarters in Poland “a significant decision precisely because of the changed security environment and the recognition that the United States needs to have a longer-term capability to sustain our presence, our training, our activities, and our support to the countries of the eastern flank, both bilaterally and through the NATO battlegroups.”

Asked about the question of “permanently” stationing the headquarters in Poland in the light of the NATO-Russia Founding Act, Wallander said it was her understanding that the move would comply with the 1997 document, which refers specifically to “substantial combat forces.”

The U.S. Army Fifth Corps’ history dates back to World War I. It took part in the D-Day landings and liberation of Europe in World War II, helped to defend Europe during the Cold War, and fought in the Balkans, Iraq and Afghanistan.

The Corps’ headquarters in Ansbach, Germany was deactivated as a result of a Pentagon defense posture review in 2012 but it was reactivated in 2020, became fully operational late last year, and last spring moved from Fort Knox, Ky. back to Germany.