Biden Designates Qatar, a Close Ally of Hamas, As a ‘Major Non-NATO Ally’ 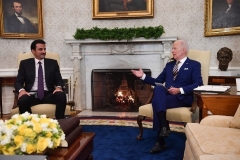 (CNSNews.com) – With President Biden’s decision to designate Qatar as a major non-NATO ally, the oil- and gas-rich Gulf state joins a small group of countries eligible under U.S. law for special military and economic privileges.

Biden hosted Emir Sheikh Tamim Bin Hamad al-Thani in the Oval Office on Monday, and praised Qatar as “a good friend and a reliable and capable partner.”

Administration officials made a point of noting that al-Thani was not only the first foreign head-of-state to visit the White House this year, but also the first Gulf leader to visit since Biden took office.

Biden announced his intention to designate Qatar as a major non-NATO ally (MNNA), a move which he said reflected “the importance of our relationship.”

(During the last months of the Trump administration, a senior State Department official said the U.S. hoped to move ahead with according Qatar the special status.)

The State Department describes MNNA status as “a powerful symbol of the close relationship the United States shares with those countries and demonstrates our deep respect for the friendship for the countries to which it is extended.”

In a notification to congressional leaders after the meeting, Biden wrote, “I am making this designation in recognition of Qatar’s many years of contributions to U.S.-led efforts in the U.S. Central Command area of responsibility and in recognition of our own national interest in deepening bilateral defense and security cooperation with the State of Qatar.”

Qatar is home to the Al-Udeid Air Base, the forward headquarters of Tampa, Florida-based U.S. Central Command.

The small peninsular state has a long history of involvement in Afghan affairs, and took in the “Taliban Five” after the Obama administration released the terrorists from Guantanamo Bay in 2014 in exchange for U.S. Army Sgt. Bowe Bergdahl.

Qatar for eight years hosted a political office for the Taliban, and helped to broker talks aimed at ending America’s longest war.

It played a key role in helping the U.S. military’s rushed withdrawal from Afghanistan last August after Kabul fell to the terrorist group, accommodating evacuees and supporting ongoing efforts to locate Americans and others still in the country.

More recently, Qatar is reported to be trying to play a role in U.S. efforts to get Iran to release Americans and third-country nationals incarcerated in that country. (Unlike its Gulf neighbors, Qatar maintains cordial relations with the regime in Tehran, and just last week Qatar’s foreign minister held talks in the Iranian capital with President Ebrahim Raisi.)

In the Oval Office on Monday, Biden underlined Qatar’s contribution in Afghanistan, and also credited the emirate for “maintaining stability in Gaza and providing lifesaving assistance to the Palestinians.”

The president did not, in his public comments, refer to Hamas, the U.S.-designated foreign terrorist organization that seized the Gaza Strip violently in 2007. Hamas has been responsible for the deaths of hundreds of Israelis and others – including at least 15 Americans killed between 1993 and 2002 – in suicide bombings and rocket attacks.

As well as being a leading provider of humanitarian and financial aid to Gaza, Qatar has for years been a major supporter of Hamas, and the emir personally meets regularly with Hamas leaders – including a meeting last May, a phone call the same month, and meetings in January 2021 and December 2019.

Qatar’s sympathies with radical Islamists, including Hamas and the Muslim Brotherhood (out of which Hamas emerged in 1987) caused a serious rift with some of its Gulf neighbors, and from 2017 until early last year it was subjected to punitive sanctions by Saudi Arabia, the United Arab Emirates (UAE), Bahrain, and Egypt.

In a 2014 speech, a senior U.S. Treasury Department official described Qatar – along with Kuwait – as “more permissive jurisdictions” for individuals collecting funds for terrorist groups in Syria, including ISIS and the al-Qaeda affiliate, al-Nusra.

He also pointed out that Qatar “has for many years openly financed Hamas, a group that continues to undermine regional stability.”

Still, a senior Biden administration official, briefing on background ahead of al-Thani’s visit, praised Qatar’s counterterrorism cooperation, noting its participation in the coalition to defeat ISIS and the fact that Qatar last fall joined the U.S. in designating for sanctions a Hezbollah financial network in the Arabian peninsula

--Afghanistan (designated by Obama administration in 2012) is now controlled by the Taliban, which after overrunning Kabul last summer installed an unelected regime that includes U.S.- and U.N.-designated terrorists.

--Pakistan (designated by the George W. Bush administration in 2004) has a documented history of support for terrorists in Afghanistan and Kashmir, enforces some of the world’s most notorious blasphemy laws, and forfeited hundreds of millions in U.S. military aid in 2018 over collusion with terrorists. Over the past decade, several pieces of legislation have been introduced in Congress to strip Pakistan of its MNNA status, most recently last April.

--Thailand (designated by the George W. Bush administration in 2003) underwent military coups in 2006 and 2014, since when some military elites have looked increasingly for support to China – which unlike the U.S. does not speak out against authoritarian tendencies.

--The Philippines (designated by the George W. Bush administration in 2003) is a longstanding U.S. ally although relations took a rocky turn after the autocratic President Rodrigo Duterte took office in 2016, and later threatened to scrap a 20-year-old agreement governing the deployment of U.S. troops in the Philippines. Duterte’s exit after presidential elections this spring could usher in a change of tone and policy direction.