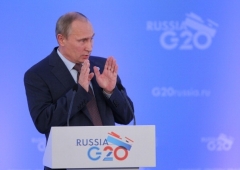 (CNSNews.com) – President Biden said Thursday he thinks Russia should be expelled from the G20, but that if doing so proves not possible, then Ukraine should be invited to the club’s summit as an observer.

He did not mention another option – for the U.S. and other democracies to boycott this year’s G20 summit in November, if President Vladimir Putin attends.

Indonesia is hosting the summit for the first time this year. Russian Ambassador to Jakarta Lyudmila Vorobieva confirmed this week that Putin is planning to take part.

Asked during a press conference in Brussels whether he thought “Russia needs to be removed from the G20,” Biden replied, “my answer is yes,” then added that the decision “depends on the G20.”

Biden, who was in the Belgian capital for NATO, European Union, and G7 meetings, said the matter had been raised during the day’s talks.

He said he had raised the possibility that, if Russia could not be removed – “if Indonesia and others do not agree” – then the G20 should invite Ukraine “to attend the G20 meeting, and observe.”

Cameron said a pre-emptive stayaway announcement by the U.S. and Britain, preferably joined by European members of G20, “would have a big impact,” and that Canada, Japan, South Korea and Australia would also not likely attend “if Mr. Putin is still in place and continuing his war.”

German finance minister Christian Lindner was quoted as saying early this month in connection with the G20 that it was “hardly imaginable” Russian and Western officials could sit together at international summits “as if nothing has happened.”

Earlier on Thursday – unrelated to Biden’s comments – Australian Prime Minister Scott Morrison expressed the view that Putin should not be allowed to take part in the 2022 summit.

Calling the invasion of Ukraine “a violent and aggressive act that shatters the international rule of law, Morrison said that for him, “the idea of sitting around a table with Vladimir Putin … is a step too far.”

He noted that the United States has already assessed that Russian has committed war crimes in Ukraine.

Morrison said Australia has been making clear its “very strong concerns about the involvement of Russia in the G20 this year.”

Australia wants Indonesia’s hosting of the summit to be a success, he said, but “we need to have people in the room that aren’t invading other countries.”

The Indonesian government minister responsible for the summit, Airlangga Hartarto, told the Jakarta Post this week that the government wants to maintain the G20’s economic focus, and would not amend the agenda to accommodate “political and security issues.”

A statement issued after Thursday’s G7 meeting in Brussels did not refer specifically to the G20, but said that, “[i]nternational organizations and multilateral fora should no longer conduct their activities with Russia in a business as usual manner.”

“We will work closely with our partners to act as appropriate, based on shared interests, as well as rules and regulations of respective institutions.”

Referring to the G7 statement a senior U.S. administration official said in a background briefing, “Our purpose here is to methodically remove the benefits and privileges Russia once enjoyed as a participant in the international economic order.”

After Putin annexed Crimea in 2014, the then-G8 kicked Russia out of the grouping.

But while the G7 are all democracies and close partners – the U.S., Britain, Canada, France, Germany, Italy, and Japan – the G20 includes countries that are supportive of Russia or who take a more non-aligned approach.

G20 members that have not joined a campaign of sanctions against Moscow over the invasion of Ukraine include China, India, Indonesia, Argentina, Brazil, Mexico, Saudi Arabia, South Africa, and Turkey.

China has already rejected calls for Russia to be expelled from the G20.

“It brings together major economies in the world, including Russia, which is an important member of the group. No member has the right to strip another country of its membership.”

Poland, which according to World Bank data had the 21st biggest economy by GDP in 2020, has proposed that it should replace Russia on the G20.

Putin Downplays Suggestions He Came Under Fire at G20 Summit Over Ukraine (November 17, 2014)