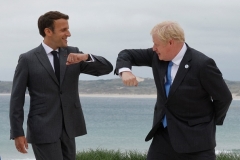 (CNSNews.com) – Implying that French President Emmanuel Macron is overreacting to the newly-announced U.S.-U.K.-Australia security partnership, British Prime Minister Boris Johnson said it was time for critics of the arrangement to “get a grip.”

And lest there be any doubt about the target of his words, he threw in some schoolboy French, inviting them to “prenez un grip” and adding, “donnez-moi un break.”

“I just think it’s time for some of our dearest friends around the world to, you know, prenez un grip about all this,” Johnson said in Washington, where he engaged with lawmakers a day after meeting with President Biden at the White House.

“Uh, donnez-moi un break,” he continued. “Because this is fundamentally a great step forward for global security. It’s three very likeminded allies standing shoulder-to-shoulder, creating a new partnership for the sharing of technology.”

“It is not exclusive. It is not trying to shoulder anybody out. It is not adversarial towards China, for instance. It is there to intensify links and friendship between three countries and – in a way that I think will be beneficial for things that we believe in.”

“Good for the protection of democracy, freedom, human rights, equalities, the rule of law, which underpins the free trade that we’ve just been talking about,” Johnson said. “So I, you know, I – I find it very hard to see in this agreement anything not to like.”

At its core the AUKUS initiative entails the U.S. and Britain helping Australia to acquire nuclear-powered, conventionally-armed submarines to help the allies confront what Biden called “rapidly evolving threats” in the Indo-Pacific.

The announcement infuriated the French, who in 2016 concluded a multi-billion dollar contract to supply Australia with conventionally-propelled submarines – a deal that has now been scrapped in favor of boats better equipped to patrol the expansive Pacific.

Beyond the financial blow, the French government was also caught unawares, having been given notice just a few hours before the announcement was made by Biden, Johnson and Australian Prime Minister Scott Morrison last Wednesday.

In a bid to patch up a rift that saw the unprecedented recalling of the French ambassador from Washington, Biden requested a phone conversation with Macron, which finally took place on Wednesday.

A carefully-worded “joint statement” issued afterwards said the two “agreed that the situation would have benefitted from open consultations among allies on matters of strategic interest to France and our European partners,” adding that “President Biden conveyed his ongoing commitment in that regard.”

Macron’s office put out the same statement in English, although a French version contained a small but pointed difference – instead of saying the situation would have “benefitted from” consultation, it said consultations would have “avoided [d’éviter] this situation.”

The statement offered no indication of a direct Biden apology. It did say the two leaders would meet in Europe late next month, and that the French ambassador would return to D.C.

(There has been no word yet on whether the ambassador to Australia, also recalled, would return to Canberra. Morrison, who is also visiting Washington, told reporters at the Australian Embassy that he has tried to call Macron, with no success yet.)

Asked twice whether Biden had apologized during the call, she replied both times that he had “acknowledged that there could have been greater consultation.”

Psaki declined to comment when asked whether Johnson’s “get a grip” remark had been helpful.

“I can’t speak to the comments, and whether they’re constructive or not, from other countries,” she said.

If Johnson’s remarks directed at the French raise eyebrows, they come against a backdrop of a long history of cross-Channel friendship and rivalry.

During the current row, French Foreign Minister Le Drian did not bother recalling the ambassador from London, contemptuously dismissed Britain’s role in the AUKUS as one of “constant opportunism” and likening Britain’s part to that of a superfluous “third wheel.”