Biden Heads to Asia, As Senators Press Him to Include Taiwan in New Regional Economic Partnership 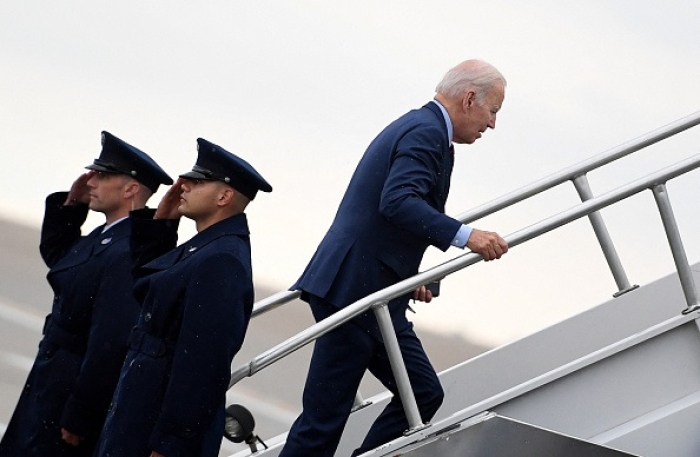 President Joe Biden boards Air Force One on May 6, 2022. (Photo by OLIVIER DOULIERY/AFP via Getty Images)

(CNSNews.com) – Dozens of U.S. senators from both parties are urging President Biden to include Taiwan in the major new Indo-Pacific economic initiative that he plans to launch during his first presidential trip to Asia.

As Biden heads to the region on Thursday, the administration has given no public indication yet whether Taiwan will be invited to join the proposed Indo-Pacific Economic Framework (IPEF).

In the face of Chinese economic coercion, the IPEF aims to align regional countries in labor and environmental standards, supply chain security, clean energy, and the development of a modern digital economy, among other areas.

Taiwan has expressed its hope to be a member of the IPEF, a status that would rile Beijing. The Chinese Communist Party regards Taiwan as a renegade province and prioritizes isolating the island democracy and severely limiting its diplomatic space.

Taiwan supporters were troubled when U.S. Trade Representative Katherine Tai while testifying before the Senate Finance Committee at the end of March declined to say whether Taiwan would be invited to take part.

A month later, Secretary of State Antony Blinken was asked about Taiwan and the IPEF while testifying before the House Foreign Affairs Committee.

Blinken did not directly address the issue of Taiwan’s potential membership, but did say that the IPEF is “going to be open, it’s going to be inclusive, and I imagine we’re going to be engaging virtually every country in the region.”

On the eve of Bidens’s trip 50 senators – 36 Republicans and 14 Democrats – joined the chairman and ranking member of the Senate Foreign Relations Committee, Sens. Bob Menendez (D-N.J.) and Jim Risch (R-Idaho) in a letter Wednesday urging him to include Taiwan.

“Excluding Taiwan from IPEF would significantly distort the regional and global economic architecture, run counter to U.S. economic interests, and allow the Chinese government to claim that the international community does not in fact support meaningful engagement with Taiwan,” they wrote.

The senators highlighted both the importance of Taiwan as an economic and trading partner, and the strategic aspect, arguing that it is “critical for U.S. security interests that Taiwan is embedded in the region’s economic architecture.”

“The more economic engagement U.S. and allies and partners have with Taiwan, the stronger our collective resilience against coercion,” they wrote.

“Russia’s invasion of Ukraine shows the value of tangible economic support by the United States and like-minded allies and partners, and the same is true for Taiwan,” the senators said. “Including Taiwan in the IPEF would be an invaluable signal of our rock-solid commitment to Taiwan and its prosperity and freedom.” 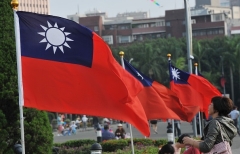 The senators’ appeal follows an earlier one signed by 200 members of the House, led by the co-chairs of the bipartisan Congressional Taiwan Caucus.

After laying out reasons why they believed that “Taiwan should be at the front of the line to be invited to participate in the IPEF,” the signatories in that letter – addressed to Tai and Commerce Secretary Gina Raimondo – said that including Taiwan “would also send a clear signal that the United States stands with its allies and partners, and will not be bullied by the PRC.”

National Security Advisor Jake Sullivan on Wednesday confirmed that Biden will launch the IPEF while in Japan, his second stop after a visit to South Korea.

“President Biden will be joined in person by the Prime Minister of Japan [Fumio Kishida] for the launch of IPEF and virtually by leaders from a number of Indo-Pacific partners, from Down Under to Southeast Asia to Northeast Asia,” he said.

Sullivan did not name specific countries that would become partners in IPEF.

He said the IPEF launch, as well as items of the itinerary such as a meeting of the leaders of the Quad – the U.S., Japan, Australia, and India – would put on display “an affirmative vision of what the world can look like if the democracies and open societies of the world stand together to shape the rules of the road, to define the security architecture of the region, to reinforce strong, powerful, historic alliances.”

Sullivan said that would send a powerful message that “will be heard everywhere,” including in Beijing.

“But it is not a negative message, and it's not targeted at any one country,” he said. “It’s targeted at an audience the world over about what American leadership, working flanked by allies and like-minded partners, can deliver for people everywhere.”

In the Heritage Foundation’s 2022 Index of Economic Freedom, it is ranked the sixth freest economy of the 184 countries evaluated.