(CNSNews.com) – In the first known such action of the Biden administration, U.S. military forces have carried out “airstrikes against infrastructure utilized by Iranian-backed militant groups in eastern Syria,” Pentagon press secretary John Kirby said on Thursday evening, confirming that the president authorized the strikes in response to recent attacks on U.S. and coalition forces in Iraq.

The strikes came ten days after Iraqi Shi’ite militias fired several dozen rockets at a base in Erbil housing U.S.-led coalition troops, killing a civilian contractor and injuring an American service member among others. On Monday, rockets landed in Baghdad’s Green Zone, where the U.S. Embassy and other diplomatic missions are located.

“This proportionate military response was conducted together with diplomatic measures, including consultation with coalition partners,” he said. “The operation sends an unambiguous message: President Biden will act to protect American and coalition personnel. At the same time, we have acted in a deliberate manner that aims to de-escalate the overall situation in both eastern Syria and Iraq.”

Earlier, administration officials blamed Iran for the actions of its proxy militias in Iraq and said it would hold Iran responsible for them.

“We do hold Iran accountable for the actions of their proxies,” White House press secretary Jen Psaki on Wednesday. “And, of course, we reserve the right to respond in a manner and at a time of our choosing, but we will respond in a way that’s calculated, on our timetable, and using a mix of tools seen and unseen.”

In an apparent dig at the Trump administration, she added, “What we will not do – and what we’ve seen in the past – is lash out and risk an escalation that plays into the hands of Iran by further destabilizing Iraq. And that is our priority.”

The airstrikes reportedly occurred near the city of Al-Bukamal, just inside Syrian territory near a major border crossing linking Iraq’s Anbar province with Deir ez-Zor province in Syria.

A media organization in eastern Syria tweeted that unidentified aircraft had targeted “sites near the Imam Ali base.” 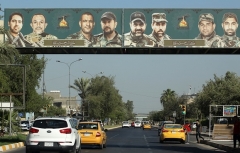 Designated as a foreign terrorist organization in 2009, KH has a record of deadly attacks against U.S. forces dating back to the Iraq War. A top KH leader, the U.S.-sanctioned Abu Mahdi al Muhandis, was killed together with Iran’s Islamic Revolutionary Guard Corps-Qods Force general Qassem Soleimani in a U.S. drone strike in Baghdad early last year.

Although the February 15 attack in Erbil was claimed by a Shi’ite group calling itself Saraya Awliya al-Dam, experts say there is evidence that it is merely a front for KH.

KSAS, another Iranian proxy militia, was formed in 2013 to fight in Syria in support of the Assad regime. It also operates in Iraq and, like KH, forms part of the so-called Popular Mobilization Forces (PMF), a mostly-Shi’ite umbrella established with IRGC backing to help Iraqi government troops fight the Sunni jihadists of ISIS.

According to interrogation reports cited by Foundation for Defense of Democracies senior fellow Bill Roggio, KSAS leader Abu Mustafa al-Sheibani and KH’s slain leader Muhandis were handpicked by the Iranian regime as early as 2003 to play a leading role in pushing its agenda in Iraq.

Five years ago the Obama-Biden administration played down concerns about the PMF. Kirby, at the time spokesman for the State Department, said then that the “vast majority” of Shi’a militias fighting ISIS in Iraq had no connection with Iran or the IRGC.

“This idea that every Shi’a militia – or Popular Mobilization Force, that is another way they’re talked about – is controlled by Tehran and is therefore nefarious in nature, is just false,” he said.

Biden Administration 'Reserves the Right to Respond' to Rocket Attack in Iraq, But Diplomacy First (Feb. 17, 2021)