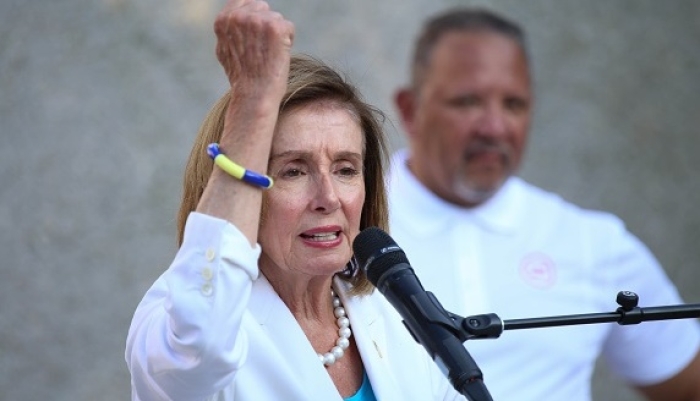 (Update: Asked Thursday about President Biden’s remarks regarding her possible visit to Taiwan, Speaker Pelosi said, “I think what the president was saying is the – maybe the military was afraid our plane would get shot down or something like that by the Chinese. I don’t know exactly. I didn’t see it. I didn’t hear it. You’re telling me, and I’ve heard it anecdotally, but I haven’t heard it from the president.” Pelosi also said she never discusses her travel plans, for security reasons.)

(CNSNews.com) – The White House has skirted around reports that House Speaker Nancy Pelosi plans to travel to Taiwan next month, but on Wednesday President Biden said in response to a question on the issue that “the military thinks it’s not a good idea right now.”

Speaking to reporters after returning to Joint Base Andrews from Massachusetts, Biden also disclosed that he expects to speak to Chinese President Xi Jinping “within the next ten days.”

While officials have been signaling a possible Biden-Xi call for several weeks now -- National Security Advisor Jake Sullivan in late June said it could take place “over the course of the next few weeks” – Biden’s confirmation comes amid strong protests from Beijing over Pelosi’s reported travel plans.

Congressional delegations to Taiwan occur periodically, but if the trip went ahead, Pelosi would be the first speaker of the House to visit Taiwan since Republican Speaker Newt Gingrich did so in 1997.

“Mr. President, do you think it’s a good idea for Speaker Pelosi to travel to Taiwan this summer?” a reporter asked Biden after Air Force One landed at the base in Maryland.

“Well, I – I think that – the military thinks it’s not a good idea right now,” he replied. “But I don't know what the status of it is.”

Pelosi, an outspoken critic of the Chinese Communist Party (CCP), had planned to visit Taiwan in April, but the trip was postponed after she tested positive for COVID-19.

Her office has declined to confirm or deny the August travel plans, first reported by the Financial Times on Tuesday.

China’s foreign ministry did not wait for confirmation, however, saying the day the report appeared that Beijing “firmly oppose[s] any form of official interaction between the U.S. and the Taiwan region.”

Spokesman Zhao Lijian warned that a visit by Pelosi to Taiwan – a self-governing democracy that Beijing claims as its own – “will have a severe negative impact on the political foundation of China-U.S. relations.”

“The U.S. must not arrange for Speaker Pelosi to visit the Taiwan region and must stop official interactions with Taiwan, stop creating factors that could lead to tensions in the Taiwan Strait, and follow through on the U.S.’s commitment of not supporting Taiwan independence,” Zhao declared.

Otherwise, he added, China would “take strong and resolute measures to safeguard its sovereignty and territorial integrity,” and the U.S. would have to “assume full responsibility for any ensuing consequences.”

Hi Xijin, a commentator and former editor-in-chief of the CCP paper Global Times, said that if Pelosi did visit, she would “bear historical responsibility for possibly triggering a military conflict in the Taiwan Strait.”

Since the report appeared the White House has trod cautiously.

Press secretary Karine Jean-Pierre on Tuesday noted that Pelosi’s office has yet to announce travel plans, before restating that the U.S. remains committed to its “one China policy.”

“This has been a consistent U.S. position for decades across multiple administrations,” she said. “This is nothing new here. U.S. support for Taiwan remains rock solid, principled, and bipartisan, and is in line with our one China policy and longstanding U.S. commitments.”

On Wednesday, Jean-Pierre again declined to “speak to any travel” not yet announced, although she did add that it was her understanding plans to visit had “not been locked in.”

At the State Department, spokesman Ned Price also declined to talk about travel plans that have yet to be announced, saying the Chinese foreign ministry had been commenting on “a hypothetical.”

“That is something that I will hesitate doing here.”

'Fight to the very end'

China demands that all countries adhere to its “one China” policy – there is one China, and Taiwan is a part of it – but the U.S. “one China” principle is distinct from the CCP’s position.

The finely-balanced U.S. stance acknowledges that Beijing says there is one China, but does not recognize Beijing’s claims to Taiwan or take a position on Taiwan’s sovereignty. It says the U.S. wants the dispute resolved peacefully, by the two sides themselves. 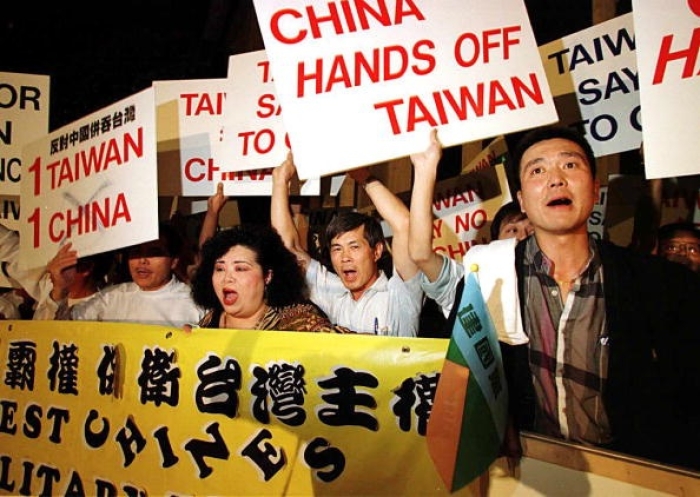 The China-Taiwan dispute dates back to the end of the Chinese civil war in 1949. In this photo, a pro-Taiwan independence demonstration is held outside a Los Angeles hotel where then- Chinese President Jiang Zemin was staying in 1997 – the same year Speaker Newt Gingrich visited the island. (Photo by Mike Nelson/AFP via Getty Images)

While the U.S. has full diplomatic relations with China, and only quasi-diplomatic ties with Taiwan, it is committed under the 1979 Taiwan Relations Act to provide Taiwan with the military means to defend itself.

The TRA also states that the U.S. will “consider any effort to determine the future of Taiwan by other than peaceful means, including by boycotts or embargoes, a threat to the peace and security of the Western Pacific area and of grave concern to the United States.”

Since last fall, China has escalated tensions across the Taiwan Strait, pointedly deploying large numbers of warplanes, including fighter jets and strategic bombers, in the skies near the island.

During a visit to Japan last May, Biden caused a stir by replying in the affirmative when asked if he was willing “to get involved militarily to defend Taiwan” if China invaded. The White House issued a statement shortly afterwards saying the president was not outlining any change in policy.

China’s defense minister warned last month that Beijing would “fight to the very end” against any attempt to “split Taiwan from China.”

While any trip to the island by Pelosi this summer would come at a tense time, Gingrich’s brief visit in 1997 came not long after arguably the most serious crisis in the then half-century-old dispute.

The previous year, President Bill Clinton had dispatched a U.S. Navy aircraft carrier and battle group to the strait after China fired missiles into the sea north and south of Taiwan, in an apparent intimidation attempt on the eve of its first direct presidential election.