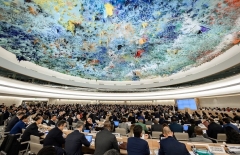 Delegates attend the opening of the U.N. Human Rights Council in Geneva last February. In contrast to the Bush and Trump administrations, the Obama administration embraced the HRC, and now the Biden administration is planning to re-engage. (Photo by Fabrice Coffrini/AFP via Getty Images)

(Update: Secretary of State Antony Blinken confirmed on Monday that President Biden “has instructed the Department of State to re-engage immediately and robustly with the U.N. Human Rights Council.” While it is “flawed,” Blinken said, U.S. withdrawal “did nothing to encourage meaningful change.”)

(CNSNews.com) – The Biden administration is set in the coming days to re-engage with the U.N. Human Rights Council, reversing its predecessor’s shunning of a body whose membership includes some of the world’s most egregious human rights violators.

The Associated Press cited unnamed U.S. officials as saying the administration would this week announce its return to the Geneva-based HRC – initially as an observer, since membership for 2021 has already been determined, before running for a seat in elections to be held in the fall, for a three-year term beginning January 2022.

One official was quoted as saying the administration believes reform is necessary, but that principled engagement was the best way to promote change in what could be “an important forum for those fighting tyranny and injustice around the world.”

The reasoning echoes that of the Obama administration, although its eight years of engagement with the council made no visible improvement to its composition. The year with arguably the poorest membership – when the proportion of free democracies among its 47 members was the smallest – was in 2016.

In 2016, only 18 members (38 percent of the total) achieved a “free” grade in annual rankings by Washington-based Freedom House.

This year will be little better, with just 19 (40.4 percent) “free” council members.

When the HRC meets for its first month-long session of 2021, its ranks will include China, Russia, Cuba, Pakistan, and Uzbekistan, all of whom were elected by the U.N. General Assembly in New York last fall to three-year terms.

They will join at least eight other current members frequently criticized by rights advocates for the way they treat their citizens – Bahrain, Cameroon, Eritrea, Gabon, Libya, Mauritania, Somalia, Sudan, and the Maduro regime in Venezuela.

--Under the Obama administration, efforts to improve membership standards during a review process held in 2010-11 were unsuccessful. The administration nonetheless continued to engage.

--Under the Trump administration, a campaign led by then-Ambassador to the U.N. Nikki Haley to reform the council led nowhere, prompting its withdrawal in mid-2018.

In a Fox News appearance late last month, Haley said returning to the council would give “credibility to a farce.”

“We spent a whole year trying to negotiate with 193 countries on changing and reforming the Human Rights Council,” she said. “Right now you have every murderer, dictator and thief on that council.”

“After a year of negotiating, when they weren’t willing to reform, why wouldn’t you say: 'You reform first, and then the United States will rejoin'?”

--There are no enforceable criteria for membership, meaning every U.N. member-state, whether a liberal democracy or an Islamist-, communist- or military-ruled dictatorship, is free to run for a seat.

--A specified number of seats are earmarked for each of the five geographical regions recognized by the U.N. In any one year only seven of the 47 seats are held by Western states, while 13 members are from Asia, 13 from Africa, nine from Latin America, and six from the Eastern Europe group. Most of the world’s autocracies belong to the African and Asian groups, which together have a majority of 26 seats (55.3 percent). There are of course free countries in Africa and Asia that are among those 26, but the improvement they bring is usually canceled out by the presence of autocracies from other regional groups, for example Cuba and Venezuela in Latin America, or Russia and Azerbaijan in Eastern Europe.

--Each regional group puts forward candidates for that group ahead of annual elections. More often than not, groups offer “closed slates” – the same number of candidates as there are vacancies – meaning there is no contest, and the “election” is mere ritual. The rare occasion when a controversial candidate has failed has been the result of a region putting up a competitive slate; Russia in 2016 lost by two votes in a three-way race for two Eastern Europe seats.

Re-engagement with the HRC will be the latest in a series of steps by President Biden to reverse his predecessor’s policy of not cooperating with multilateral initiatives which it viewed as inimical to U.S. interests. Measures already announced include rejoining the World Health Organization and returning to the Paris climate accord.

He has signaled an intention to return to the Iran nuclear deal – if Iran returns to compliance – to re-engage with the U.N. cultural agency UNESCO, and refund UNRWA, the agency for Palestinian refugees. The Trump administration in 2018 defunded UNRWA, calling it “irredeemably flawed,” and withdrew from UNESCO in early 2019.