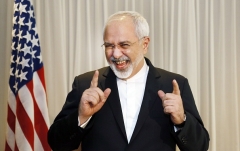 (CNSNews.com) – As the Biden administration prepares to take part in talks in Vienna with some of the parties to the Iran nuclear deal, the regime in Tehran has made clear that it will not join any meeting with U.S. officials before “all” sanctions imposed by the Trump administration are lifted.

“We’ll have no direct or indirect talks with the U.S.,” deputy foreign minister Abbas Araqchi told Iranian media outlets on Sunday, reiterating the regime’s demand that the U.S. first “lift all of the sanctions it has imposed.”

Only once Iran has verified that the sanctions have been removed, he said, would it return to its own commitments under the agreement.

At a virtual meeting hosted by the European Union on Friday, representatives of Iran and the other parties to the Obama-era Joint Comprehensive Plan of Action (JCPOA) – Britain, France, Germany, Russia, and China – discussed the prospect of a U.S. return to the agreement which President Trump exited in 2018.

They then agreed to resume talks in the Austrian capital on Tuesday this week, “in order to clearly identify [U.S.] sanctions lifting and [Iranian] nuclear implementation measures,” the E.U. said in a statement.

It added, without elaboration, that it would “also intensify separate contacts in Vienna with all JCPOA participants and the United States.”

In Washington, White House press secretary Jen Psaki called the move “a welcome and potentially constructive early step,” adding that the administration was “very clear-eyed about the hurdles that remain.”

“We don’t anticipate presently that there will be direct talks between the United States and Iran through the process, though we certainly remain open to them.”

She declined to say who would represent the U.S., but Robert Malley, the administration’s special envoy for Iran, is thought to be the most likely candidate.

Malley was part of the team led by then-Secretary of State John Kerry which negotiated the agreement during the Obama administration. His latest appointment troubled some Republicans who view him as soft on the regime.

Trump withdrew from the deal in mid-2018, citing concerns about verification – given the regime’s refusal to allow foreign inspectors free access to its military sites – the fact the agreement did not cover issues like ballistic missiles, and “sunset” clauses under which key provisions were to expire after 10-15 years.

The regime in turn began to jettison its JCPOA obligations, including exceeding the limits, in both quantity and levels of purity, of enriched uranium stockpiles allowed.

Supporters and detractors of the deal alike are aware of the significance of the issue as the new administration rolls out its foreign policy. Lawmakers from both parties have put their names to various letters to the administration calling for a firm approach, to ensure Iran cannot develop a nuclear weapon and also to address other malign behavior by the regime.

While campaigning for the White House and since his inauguration, President Biden pledged to re-enter the deal, but only once Iran returns to its commitments. He said the U.S. would then pursue a broader agreement addressing concerns such as Iran’s ballistic missile programs and regional belligerence.

Biden has also been unequivocal that Iran would have to return to compliance before the U.S. lifts the sanctions. For its part, the regime has stated categorically that that will never happen.

Foreign Minister Javad Zarif at the weekend once again underlined that Tehran regards the removal of sanctions as a prerequisite for ceasing the breaching of its JCPOA commitments – or what the regime has euphemistically termed “remedial measures.”

The aim of the talks in Vienna, Zarif said in a tweet, would be to “rapidly finalize sanction-lifting and nuclear measures for choreographed removal of all sanctions, followed by Iran ceasing remedial measures.”

How the stalemate over sequencing is resolved remains to be seen, but an unnamed senior U.S. official last week suggested the administration may be softening, telling Reuters, “It is absolutely not our position that Iran has to come into full compliance before we do anything.”

Ahead of the Vienna talks, Zarif held weekend calls with his French and British counterparts, stressing to both JCPOA partners that Iran expects sanctions to be removed first.

In a recent Chicago Council on Global Affairs - IranPoll survey, 57 percent of U.S. respondents expressed support for the U.S. participating in the nuclear agreement, but with stark differences evident between Democrats and Republicans.

Among Democratic respondents, 74 percent voiced support for the JCPOA compared to just 39 percent of Republicans, and 56 percent of independents.

For all three groups, support levels have declined noticeably since 2018, when they were measured at 82 percent for Democrats, 53 percent for Republicans, and 66 percent for independents.