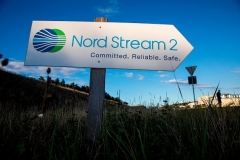 A sign near the Nord Stream 2 pipeline landfall facility in northern Germany. (Photo by Odd Andersen/AFP via Getty Images)

(CNSNews.com) – The Biden administration’s decision to waive sanctions against the main players in the controversial Russia-Germany gas pipeline project has been welcomed by Germany and Russia, but critics in Washington are appalled.

“Biden has vastly strengthened Putin’s hands at the expense of the rest of the Free World,” tweeted Sen. Ted Cruz (R-Texas), one of two Republicans who authored sanctions legislation in 2019 that helped freeze work on the Nord Stream 2 pipeline through most of last year.

“This is a huge win for Putin and a blow to the security of our Eastern European allies,” commented Rep. Mike Gallagher (R-Wisc.), while House Foreign Affairs Committee ranking member Rep. Michael McCaul (R-Texas) called the move “wholly unacceptable” and “irresponsible.”

Those same concerns have been stated, repeatedly, by the Biden administration, with officials calling the pipeline a “bad idea,” and a “Russian malign influence project.”

Secretary of State Antony Blinken did so again on Wednesday, in a statement confirming the department’s statutorily required periodic report to Congress.

“We will continue to oppose the completion of this project, which would weaken European energy security and that of Ukraine and Eastern flank NATO and E.U. countries,” he said. “Our opposition to the Nord Stream 2 pipeline is unwavering.”

The $11 billion Nord Stream 2 project aims to pipe natural gas from Russia to Germany under the Baltic Sea, doubling the annual supply from the existing Nord Stream pipeline, which began operating in late 2011.

Critics in the U.S. and European Union worry it will heighten European dependence on Russia for energy supplies, boosting Moscow’s economic and political leverage. The Kremlin has a track record of using its energy resources as a political lever in bilateral disputes.

Ukraine, whose government is deeply at odds with Russia, fears the new pipeline may jeopardize billions of dollars Kyiv now earns in transit fees for Russian gas piped westward across Ukrainian territory.

Germany and other supporters say the project is a purely commercial one that will benefit Europeans.

That message has not resonated across the E.U., however. The European Parliament has now voted three times in opposition to Nord Stream 2, most recently last January.

Despite the Biden administration’s stated opposition to Nord Stream 2, and even as the administration claims to be “committing to using all available diplomatic tools to make sure” the pipeline isn’t completed – in the words of State Department deputy spokesperson Jalina Porter on Wednesday – it has chosen to waive sanctions on the parties at the core of President Vladimir Putin’s pet project.

While sanctions will go ahead against four ships and several other entities involved in the construction, Blinken said he had “determined that it is in the national interest of the United States to waive the application of sanctions on Nord Stream 2 AG, its CEO Matthias Warnig, and Nord Stream 2 AG’s corporate officers.”

Nord Stream 2 AG, the company leading the project, is a consortium led by the Russian state-owned Gazprom.

Warnig is a controversial figure, whose shadowy past includes a career in the former East Germany’s notorious Stasi intelligence agency and a longstanding relationship with Putin, himself a former KGB officer.

(Warnig’s official bio on the company website says he “had several functions in the German Democratic Republic’s government from 1981 to 1990, including roles in the foreign trade ministry and the Cabinet.” It is silent on the years prior to 1981. He reportedly began working for the Stasi in 1974.)

Blinken provided no reason in his statement for the “national interest” justification for waiving sanctions against the company responsible for the pipeline and its CEO. But Germany is a close U.S. ally, and the Biden administration has touted its focus on strong transatlantic ties, even as it voices opposition to Nord Stream 2.

German Foreign Minister Heiko Maas told reporters on Wednesday Berlin saw the waiver decision as “constructive,” saying that it took into consideration “the extraordinarily good relations that have been established with the Biden administration.”

Blinken’s announcement was issued hours before he was scheduled to hold his first meeting with his Russian counterpart, Sergei Lavrov, on the sidelines of an Arctic Council ministerial meeting in Iceland.

‘If Donald Trump did this …’

Coupled with his criticism over Germany’s defense spending, it played a key role in Trump’s decision to reduce the number of U.S. troops in Germany – a move reversed under Biden.

“Germany pays Russia billions of dollars a year for Energy, and we are supposed to protect Germany from Russia,” he tweeted last summer. “What’s that all about?”

U.S. opposition went beyond rhetoric on Twitter. Under legislation Trump signed into law at the end of 2019 – authored by Cruz and Sen. Ron Johnson (R-Wisc.) and inserted into a defense policy bill – construction of the pipeline came to an abrupt halt under threat of sanctions.

Work only resumed last December – after the U.S. presidential election – and is now reportedly 95 percent complete.

Biden and the Democrats repeatedly characterized Trump as pro-Russia and pro-Putin (and charged that his campaign colluded with Russia in the 2016 election – an allegation which special counsel Robert Mueller’s investigation was unable to substantiate.)

“If Donald Trump did this, Nancy Pelosi would be launching a third impeachment effort today,” Gary Bauer, president of the conservative think tank American Values, commented on Wednesday in response to the sanctions waiver reports.